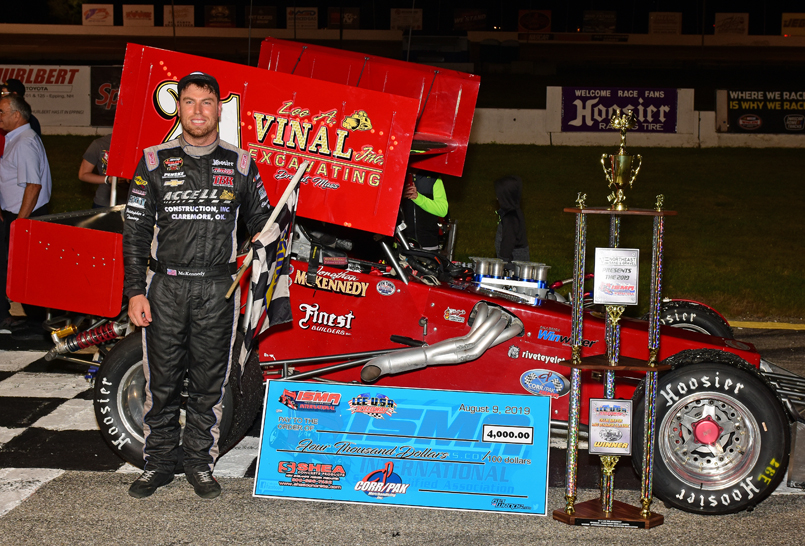 Lee, NH – Jon McKennedy started the Ollie Silva Memorial 75 on the outside of the front row by luck of the draw. The Chelmsford, Mass. driver was in the lead immediately, but lost it soon thereafter to 2018 ISMA champion Kyle Edwards for a number of laps. He retook the lead on lap 29 and would hold that spot for the remainder of the race, despite some strong runners behind him. McKennedy, who had won the 2012 and 2014 Ollie Silva, easily picked up $1000 from Shea Concrete Products, at the halfway mark on his way to the win.

McKennedy, the 2017 ISMA champion, commented in victory lane. “We had a great car. Obviously we started out front which was nice. The team gave me a great car. This thing was awesome. I was able to get the lead and just kind of set my own pace. At times I was going hard, at times I kind of slowed up, then I was going hard again. So it’s nice when you’re out front with clean air on the front wing and top wing and able to set your own pace. Kyle kind of caught me a little off guard there but I thought he was going too hard, too early so I kind of let him run away a little bit. Then with the $1000 halfway bonus from Shea Concrete coming up, I thought maybe I should try and get that and I was able to. From that point on I could kind of control the race. Again, a big thanks to the crew. It was an awesome car which took a lot of preparation. They worked on this think until one o’clock in the morning putting cylinder heads on this so a big thanks to all of those guys. So, a big thanks to my crew, Harrington Paving, Finest Builders and Vinal Excavating.”

Edwards, who had launched the early initiative to take the lead, said later, “We just had too good a car, too early. We gave it hell and then we just started wagging the tail on the second half of the race. We were just hanging on. A podium is good. I think we put on a good race for the fans. So now we have something to work on for next time we come back here. We have a good car and it’s in one piece. We’ll go on to Canada next week and try and do one spot better. I have thank my Dad, Bodnar Chassis and Jim Bodnar, and just all the people who help the series, Patco, Shea and Hoosier Tire. ­

Trailing Edwards to finish on the podium was another former ISMA champion with 8 titles during his illustrious career, Russ Wood. The popular Pelham, NH driver who is switching seat spots with Timmy Jedrzejek for 2019, received a thunderous round of applause for his third place finish.

“We had fun tonight, said Wood with a familiar grin. “The car was decent. We knew Jon would be tough, and Kyle, they are both good runners. Our car was pretty fast in the day. We felt pretty good. I felt good. I took it easy in the beginning of the race. Then I realized I had to get going. In the midle of the race the car was really fast in the high groove. It got a little loose a few times in the end. We were looking for a yellow. We might have been able to grab a second. I don’t think anyone had anything for Jon. But we had a fun night. The guys worked hard getting the car ready after Sandusky. I really appreciate that. It’s just good to be here.”

Rookie Jeffrey Battle, Wood’s teammate in the Lane 9, and McKennedy led the way to green with McKennedy assuming the lead. Yellow fell shortly therafter for Mike Netishen’s 55 who was done for the night as was the 51 of Dave Duggan,

McKennedy took off in the lead but Kyle Edwards jumped by Battle as racing resumed. Chris Perley, who started in 8th, looked to be the man on the move until suddenly the 11 was into the wall just past turn two. He was towed in for a tire, but more damage was found and he too, was out.

On this restart, Edwards was on the 21’s tail and moments later he took the lead, pulling quickly away. McKennedy stayed in site followed by Battle, Wood and Dan Bowes. The next five were Mike Lichty, 2018 Silva winner Mike Ordway Jr., Ben Seitz, Jamie Timmons and Mark Sammut.

A lap car slowed Edwards around the lap 27 mark allowing McKennedy to close the gap and to eventually retake the lead. Jon headed for a $1,000 bonus which he claimed and was on his way to victory. Edwards stayed close for a while and position shuffling saw Wood go past his young teammate Battle for third. Battle stuck close while Bowes found Ordway Jr. sneaking up.

The race belonged to McKennedy for his ride to the win. Edwards drifted back while several lap cars were positioned in between.

With five to go, the 21 was on cruise while a distance behind Edwards had Wood breathing down his neck. Battle and Bowes completed the top five as the checkers fell. 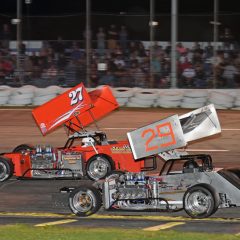 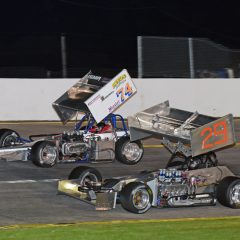 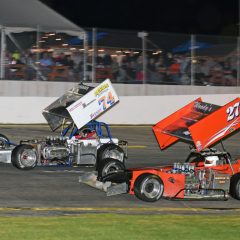 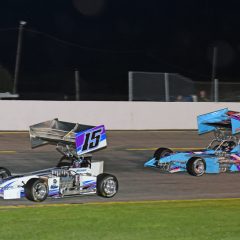 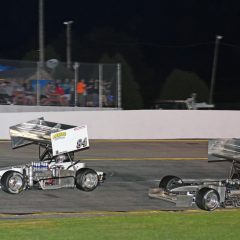 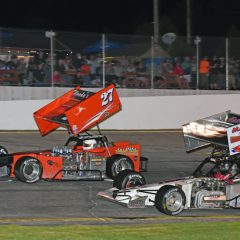 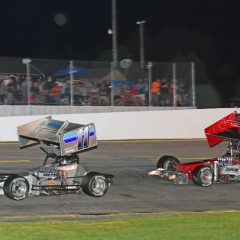 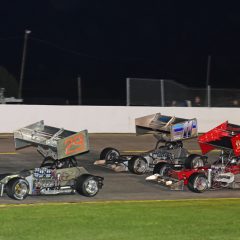 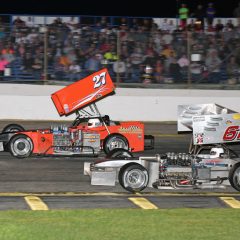 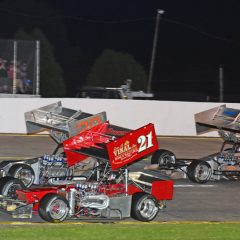 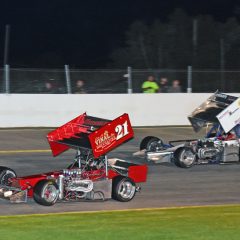 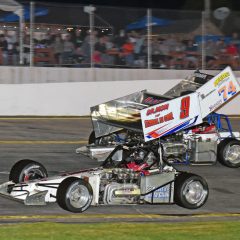 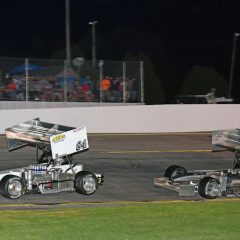 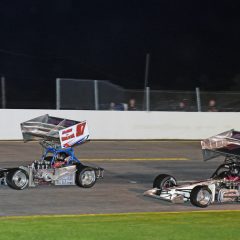 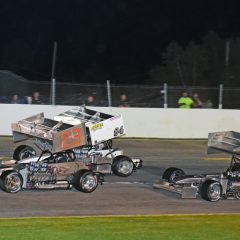 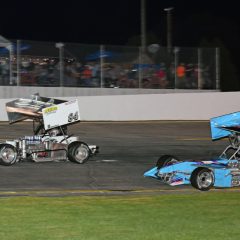 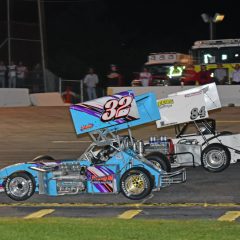 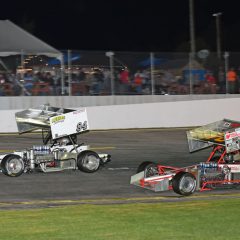 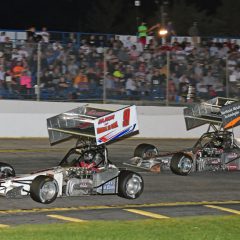 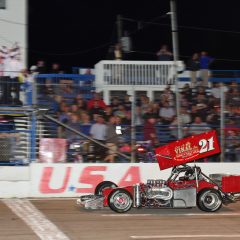 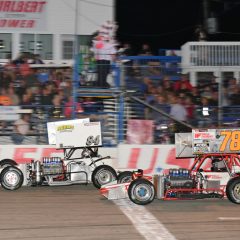 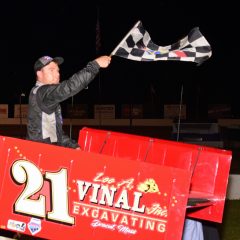 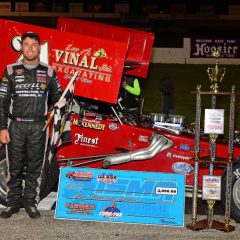 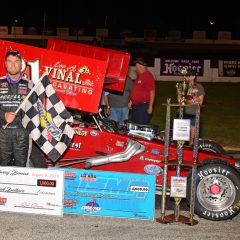 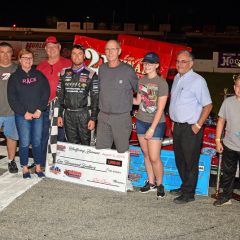 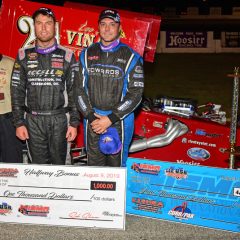 Battle, a teenager who competes in the 350 Super division, was in only his second time ever in a big block super and he was all smiles after the race. “This is pretty good for only the second weekend of racing in the car and the first time in this white car really. We went out to Sandusky and caught up in a wreck on Friday night. Then we were running tenth on Saturday night and had a motor issue that caused us to pit on the last lap. But, that’s all part of racing. Tonight was definitely awesome to go out there and maintain a nice fourth place finish. Being teammates with Russ Wood was very, very cool. I cannot thank car owner Howie Lane enough. I can’t express what heart he has. He’s a great, great guy. I just want to thank him for this awesome opportunity and hopefully we’ll have more of them.”

Bowes, who finished second in the 2018 ISMA title chase by only a handful of markers, was solid in fifth. “We started off the race kind of riding along, and made a couuple easy spots up just being in the right lane. I tried to follow Russ there. He knows how to run these races. So I tried to save tires and follow him. The car started to get tight about twenty five laps in and it just got tighter and tighter. As I got up to people like Jeffrey I tried to get a run on the outside and I just heated the tires up too much trying to get alongside so I just slipped back. All in all it was a good night. I wish we could have done a little bit better at one of our home tracks. Still it was a fun race so I can’t really complain too much.”