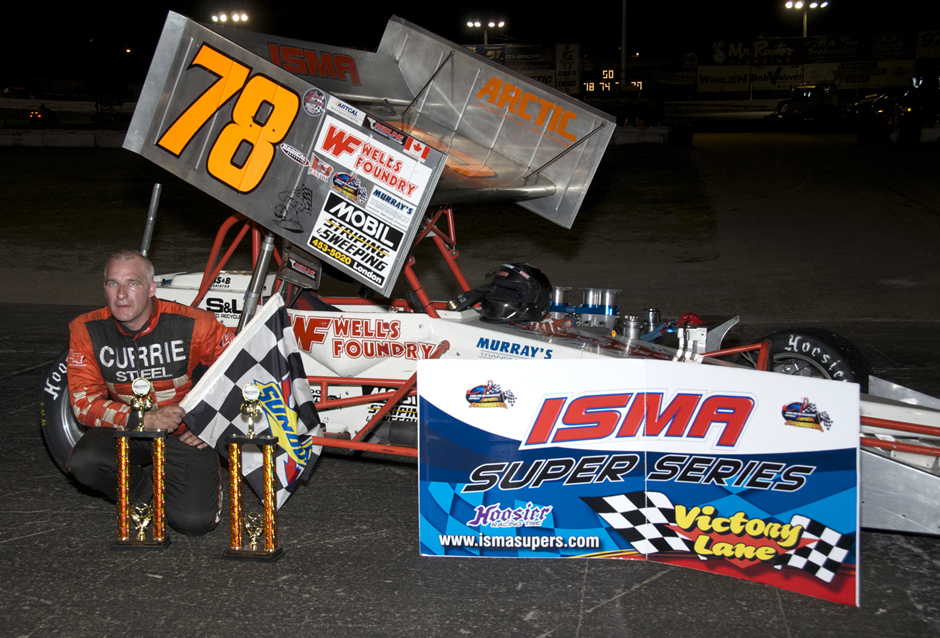 WATERFORD, CT – Mark Sammut of London, Ontario ended a winless drought that had lasted over four years on Saturday night at Waterford Speedbowl (CT). Sammut, whose last recorded International Supermodified Associaton (ISMA) win was on July 24, 2010 at Sandusky Speedway (OH), took the lead on lap 38 and cruised to his first career ISMA win at the 3/8-mile Connecticut oval.

“We’ve finished fourth here, we’ve finished third here, and we’ve finished second here,” said Sammut after the race. “It’s good to finally get the win here. It’s been four years since we’ve even won an ISMA race. You start to wonder if you’re ever going to win again. Tonight, the car was great and hopefully we can keep it up.”

For the second race in two nights, Ryan Coniam paced the field during the early stages of the event. Coniam led the first 37 laps of the race before heavy smoke became visible from the engine of his No. 46. Race officials would show him the black flag on lap 37 and he was forced to bring his car to pit road.

When Coniam brought his car to the infield, the car caught on fire before safety officials were able to get to the scene and extinguish the fire. Coniam would escape the car safely and go on to finish 15th.

On the ensuing restart, Mark Sammut would inherit the lead with Rob Summers and Friday night’s feature winner at Lee USA Speedway, Jon McKennedy trailing close behind. On this night, neither of the championship favorites were a match for Sammut.

“When I saw the 74 (Summers) get into second on that last restart I thought I may have seen him, but I never did,” said Sammut. “The car was strolling right along and it was working as good at the end as it was at the start of the feature. I knew if somebody was going to go by me they were going to be a lot faster.”

Summers would hold off Jon McKennedy in a battle for crucial championship points to finish in the runner-up position. After the race, Summers believed that he may have had a shot to steal the win from Sammut if he was able to get a caution later in the race.

“There were a couple times on restarts where he was better on the long runs, but on a short run I was able to get beside him,” said Summers of Vernon, Connecticut. “It was a good points night. I just wish I could bring these guys a victory. Brad Lichty and the whole team have just given me an awesome car all year. But hey, we’ll take a second-place.”

Saturday night’s win for Sammut is his first of the 2014 season and comes after a number of strong runs, most notably a race earlier this year at Oxford Plains Speedway (ME) in which he gave up the lead to Lou Cicconi while battling slower traffic in the closing stages of the race.

“It was nice to seal the deal tonight,” said Sammut. “At Oxford, it kind of got away from us. You don’t forget those because you don’t always get the chance to do it again.”

McKennedy of Chelmsford, Massachusetts would stand on the podium for the second straight night after a third-place finish. Jeff Locke and Ben Seitz completed the top-five.

Although his night came to an abrupt halt due to apparent engine issues, Ryan Coniam led the most laps (37) on Saturday night and claimed the Radical Racegear Lap Leader Award. Coniam will receive a $100 Radical Racegear product certificate for his performance.

Mike Netishen made his way to the race track later than he expected to on Saturday afternoon, but he was rewarded with a solid day and a top-10 finish. Netishen started from the 18th position and gained a total of nine positions during the 50-lap event to claim the $100 Hard Charger Award presented by Colonel Arnold Briggs In Memory of his brother, SFC Charles T. Briggs, USMC, an early supporter of Supermodified racing.

As is a tradition whenever the ISMA Supermodifieds are in town, a lucky fan in the grandstands on Saturday night took home a free bicycle in the ISMA Free Bike Giveaway presented by New England Motor Racing Supply in Hollis, New Hampshire.

The “Winged Warriors” of the International Supermodified Association will return to action next weekend with a doubleheader north of the border in Ontario, Canada. On Friday, August 15, ISMA will travel to Delaware Speedway before finishing the weekend on Saturday, August 16 at Sunset International Speedway.