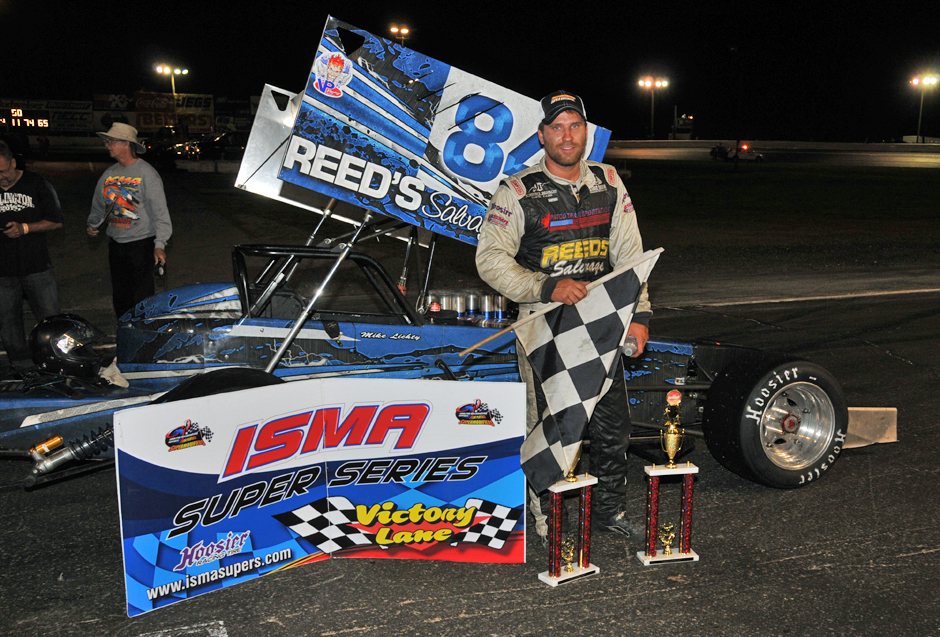 Waterford, CT – Mike Lichty’s first-ever ISMA career win came at the New London Waterford Speedbowl on May 29, 2010. After some rough times this season he was more than happy to be standing in victory lane Saturday night after the ISMA 50 as part of Wings and Wheels night.  Starting fifth in the 18-car field, Lichty caught up to leader Chris Perley, who was mired behind a back-marker for many laps, finally using that same car as a pick to get by both for the lead with fifteen to go.  The race, which only saw one quick caution, was completed in less than 15 minutes.

Lichty was elated with his first win of the 2015 season. “I knew Chris was struggling with a slower car up there.  I bided my time.  Obviously it’s an advantage to starting up front. There are lots of good cars out there. We definitely needed this. It’s just been one of those years;  up and down. We started off strong, then struggled mid-season and had some bad luck, especially coming off last night’s feature at Lee. Actually from where we started and where we ended up last night, I’ll take that top ten there.

“I always enjoy racing this track. I got my first win here. I knew we had a good shot at it today after practice and the heat race. I just can’t thank Craig Reed and the whole Reed family… Reed’s Salvage, my father Brad and Patco Transportation, Hoosier Tire East and everybody on the crew enough. Unfortunately Raven isn’t here  but I called her.  I’m just happy to be back in victory lane. Big shout out for Dickie in the shop and everybody who supports ISMA.”

Speaking of bad seasons, the 11 car has struggled uncharacteristically to date, so much so that Chris Perley would have the pole at Waterford, after a dnf at Lee. Unfortunately, the position was not enough to get that elusive 2015 win for the Miller team.

Perley had mixed emotions in regard to second at a track he had won at four times in the past. “I’m really happy for the team and for Ed Shea and all our sponsors to finish second tonight. It was a good run from what we’ve had.  However, I am very disgusted to finish second from the pole. Disgusted kind of to let it get away from me with a lap car. I should have been able to get by him but I couldn’t. But, we’ve made some advances and we still have a little to do with the car which is why I couldn’t get by him. It’s tough to lose. It’s disappointing but also it is great for the team the way we’ve been running. Someone said earlier let’s win this thing right to the finish. I said, that’s the thing, we have to get to the finish! So, I’m proud for the team and the sponsors. It was a good win for Mike. Still from first, second kind of sucks.”

In a race that sped by at a torrid pace, it was Perley’s attempt to get by the 55 of Mike Netishen that was was the center of attention for the huge crowd on hand. Chris described his dilemma, “I was really loose on entry so when I drove in all by myself, I was fine. So now I have a lap car in front of me that’s stopping earlier, and I have to hit the brakes and that sends me out sideways. I can’t get a run on the outside because he’s sideways. So I got on the outside a couple times and he’s loose chasing it in front of me. I kind of got run up against the fence a couple times. But I didn’t want to punt him or spin him out. I just wanted to finish tonight, so that’s what I did.”

Finishing third was another guy who had seen success at Waterford in the past in several divisions and who too has had some lackluster finishes to date in the Lichty 74. Said Rob Summers of his Waterford finish.  “We had a pretty good car. Nice win for Mikey in one of our team cars win. We had a third place and with the rough year we’ve had so far maybe this will get us back on track. We were  just a little too loose. But we still had a good run.”

Chris Perley and Tim Ice led 18 cars down to green after the Gillingham 5 had scratched from the 19-car order. Perley, after a convincing heat win, took off leaving Rob Summers, Ice, Lichty and Dan Bowes to try and catch him from the get-go.

Only one caution would slow the field and it came on lap 6 when Jeff Locke’s 37 stopped off turn two and was pushed into the infield. The Michael McVetta 22 joined Locke in the infield after McVetta’s new steering rack let go. And, with that, green covered the rest of the 45 laps of ISMA racing.

On the restart Summers closed on Perley but only for a couple laps as the 11 took off and left Summers to contend with Lichty, Ice, Ben Seitz, in a his new Allegresso-Valley built 17, Witkum, Mark Sammut, Timmy Jedrzejek, Dan Bowes, Dan Shirey and Lee winner Dave Shullick Jr.

The race, on the 3/8ths slightly banked Connecticut oval, welcomed the winged speedsters and soon Perley met up with the tail of the field and the 55. What would usually be a quick pass, did not materialize for Perley as he described after the race. His frustrations allowed Summers, Lichty, Ice and Seitz to close up the gap. The mover behind was Timmy Jedrzejek, fresh off a top five at Lee, who had moved into the top ten behind Sammut as the remainder of the field was pretty much nose to tail behind.

Lap 33 found Perley still desperately looking to get by Netishen, while Lichty was waiting for a chance to get by both of them after just getting by his teammate Summers.  His chance came a couple laps later when he got alongside Perley and shot by both the 11 and 55 when the opportunity availed itself on lap 35.

With ten to go, Lichty’s lead had increased as the 55 held back Perley, Summers, Ice, Seitz, Witkum, Sammut,  Jedrzejek, Bowes and Shirey in the top ten.

With five to go, Perley finally broke by Netishen and headed for Lichty who was now slowed slightly by the 51 of Dave Duggan, who held his line and did not go down to the leader who did not toy with the chance of making any contact with victory in sight.

Time ran out for any further challenges and Lichty crossed the line in first, trailed by Perley, Summers, Ice and Seitz.

Ice, who had a misfortunate jump call at Lee the previous night while second, was more than content with his fourth place finish. Said the Seville, Ohio driver, “Definitely a better night tonight. We were running pretty good. The car was really, really tight. I got up underneath Summers there a couple times and thought maybe I could get him. Starting on the outside row next to Perley, with Summers and Lichty behind me, I was in a pretty good crowd there. I am very, very happy with our finish tonight.”

2014 ISMA champ Ben Seitz, who debuted his new 17 on Friday night after some disappointing runs to date in his old car, said smiling, “Good race. Started 8th ; got up to fifth. It was only the second time out for this car and it shows a lot of promise. I need to thank Brian Allegresso and Butchy Valley. This car is really going to be something else when we get the bugs worked out of it. There is a lot of speed to be gained with it. I have to thank my sponsors Sammy Lorruso and Cape Cod Aggregates. Without them this wouldn’t be possible. Also thanks to the crew and my car owner Dickie Bien. We’ve had a tough season so far but I think we’re going to turn things around after this. We had a tough day today. We had to replace the throttle cable and got no practice laps which with the old car wouldn’t have been a big deal. But with this brand new car with zero practice laps, it was kind of tough. But we got through it. It was a solid night for us and a good finish.”