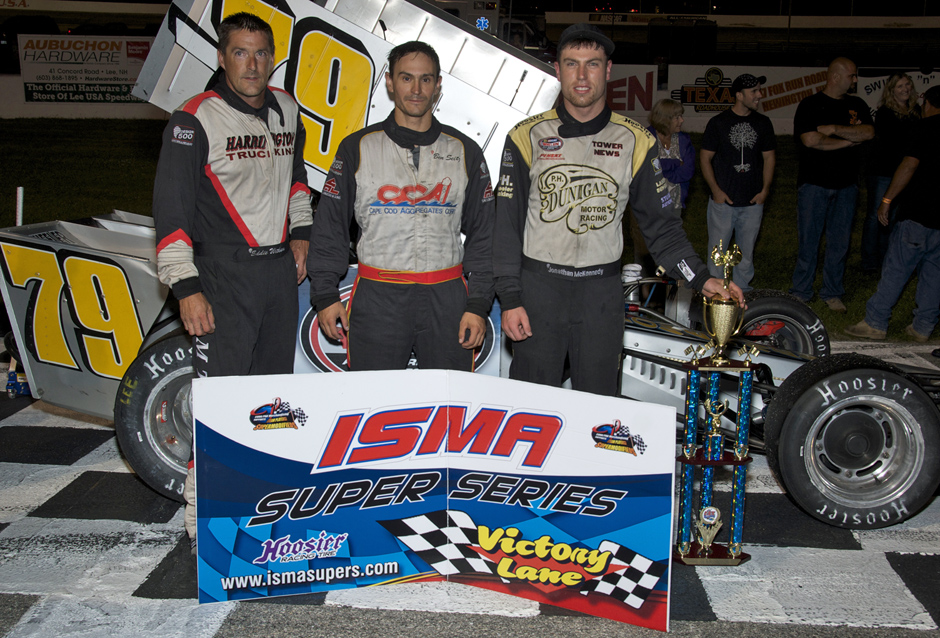 Lee, N.H. – The International Supermodified Association (ISMA) kicked off a doubleheader weekend on Friday night with the Ollie Silva Memorial at Lee USA Speedway (NH).  In what turned out to be an eventful night in New Hampshire, Jon McKennedy stole the show by charging to the front late and claiming the win in the 75-lap feature event.

McKennedy of Chelmsford, Massachusetts would restart in the fourth position for a lap 49 restart and quickly make his charge to the front. He made quick work of Ben Seitz on the outside for third, powered to the inside of Rob Summers for second, and took the lead from Eddie Witkum, Jr. on lap 57. Once he got the lead, he would never look back.

“We had a good car all day long,” said McKennedy. “I just knew that the track would really abuse the tires if I pushed the car too hard. The first half of the race I just rode around and made sure to keep the leaders in sight while making sure I had something for the end. It’s awesome to come out on top once again”

Ryan Coniam led the first 26 laps of Friday night’s race before his car slowed on the backstretch on lap 27, which allowed Witkum to take the lead. Witkum set a torrid pace once he took command and stretched out his lead to nearly a full straightaway before the caution flag flew for the first time on lap 48.

Following an extended red flag period for track cleanup, Witkum would be able to pull away after another restart on lap 49 but soon after McKennedy began his charge to the front and reeled in the leader. Witkum battled a loose racecar for the remainder of the race and held on to finish second, his best finish of the 2014 season.

“I didn’t want those cautions to come out,” said Witkum. “I was pretty much just sitting there on cruise control. I was trying to save as much as I could for the end. The car was incredible. It was just a touch loose, but it got really loose after that red flag. I was hanging on from there. It was just vibrating and spinning the tires down the whole straightaway.”

McKennedy’s win on Friday night is his second of the 2014 season after he was triumphant earlier this year north of the border at Autodrome Chaudiere (QC). He hopes to carry his momentum over to Saturday night when he returns to Waterford Speedbowl (CT), a track which he won at last year.

“The car runs awesome on the short track,” said McKennedy. “The thing has an unbelievable record at tracks at less than a half-mile. I think it has like five wins now and a couple runner-up finishes. It’s a good night. I think we’ve got the point lead and we’re heading into a track I won at last year, too.”

Ben Seitz continued his chase towards an ISMA championship by grabbing the final podium spot. Rob Summers and Mark Sammut rounded out the top-five.

Despite coming up short at the end, Eddie Witkum, Jr. led the most laps during the 75-lap feature and earned a $100 gift certificate from Radical Race Gear for winning the Radical Race Gear ISMA Lap Leader Award.

Dave Duggan had a solid performance coming from 18th on the starting grid to finish eighth on Friday night. For gaining a race high 10 positions in his charge to the front, Duggan will be presented with the $100 Hard Charger Award presented by Colonel Arnold Briggs In Memory of his brother, SFC Charles T. Briggs, USMC, an early supporter of Supermodified racing.

In addition to the awards handed out to the drivers, a lucky fan in the grandstands on Friday night was able to take home a free bicycle in the ISMA Free Bike Giveaway presented by Essex Seafood in Essex, Massachusetts.

The “Winged Warriors” of the International Supermodified Association will return to action on Saturday, August 10 at Waterford Speedbowl for a 50-lap feature event during the popular Wings ‘N Wheels event.