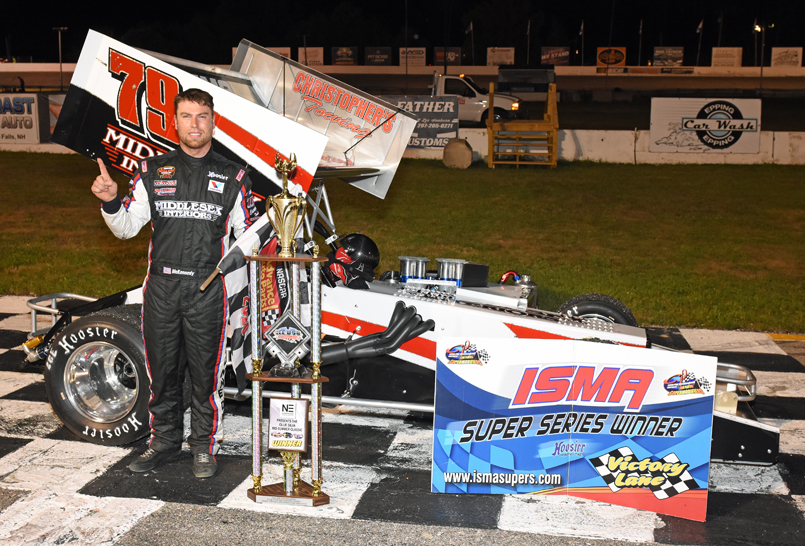 Lee, N.H. – With the coronavirus reeking havoc everywhere, auto racing certainly has not escaped being affected. With many states and Canada facing strict guidelines on travel etc., a smaller than usual contingent of ISMA supermodified competitors were able to be at Lee USA Speedway on Friday night, August 7 for the Ollie Silva Memorial 75. For most in the field, it was the first race of this strange season. But, the 50% fan turnout saw an action-packed race as they practiced the guidelines put in place. And, they seemed extremely enthusiastic with the results.

Chelmsford, Mass. driver Jon McKennedy came up from 10th starting spot to gradually challenge race leader Mike Ordway Jr. who by luck of the draw was on the pole and out front rapidly on the green. But McKennedy, in a new car with new owners, felt good about his car and would end up being his fourth win of the prestigious Silva 75.

Jon commented after the race: “I just want to thank everyone who came out tonight. Man, it feels good to win the first race of the year in a new car. A big thanks to the team, Middlesex Interiors, my crew, and Steve Vinal. Steve and I pretty much lived in the garage and put a ton of hours in this car. I’m just glad we got the win for everyone involved. We had an awesome car. It’s probably the best car I’ve ever had here. Thanks to all the guys. And to the Lepine’s who gave me the opportunity to run the car. This is our first race together and obviously it feels great to win it.

“I knew that like after five, six laps at the beginning, if we didn’t have any issues, we had a car that could win. I love coming here. The Ollie Silva Memorial has been good to me. We started the race tenth and got the lead quick. I just paced myself and went. Overall it was a great day. It was cool to get that halfway $1000 bonus donated by E. F. Shea Concrete. I tried to be there on lap 38 to grab that.. The next race will be Star Classic, one of my favorite races.”

Joining Jon on the podium were 2019 Star Classic winner Jeff Abold who was coming off a second place finish at the Sandusky Hy-Miler and 5-time Lee USA winner Chris Perley, who leads the ISMA All-Time win list.

Abold was very happy with his outing in his 05 super, winged or non-wing, saying after the race: “It was a good race. It was fun. We’re having a blast coming out here and racing with ISMA which we didn’t plan on doing. We had planned on a few shows during the Oswego season but the way everything has turned out it’s been fun to go out there and make it a good show and everything to be competitive with these guys. We haven’t been here in 11 years so this car is new here. I’m happy with what we got. It’s always a little disappointing when you are that close to it. Finishing between Jonathan McKennedy and Chris Perley who have run this track successfully and have had many wins here. I can’t really be disappointed.”

Perley, who battled side by side with Abold as both challenged McKennedy late in the race, comments on his third place finish. “This is our first race this year which is crazy as it’s August. The car was kind of terrible all day. But we kept on plugging away at it and ended up with a really good car for the feature. I was happy with it. I had to run kind of a goofy line, but it seemed to be working out for me. Then with 10 or 12 to go, the brakes just went and I lost traction all in the same lap. I thought the tires went but it turns out that the nut holding the left rear tire onto the axle was about a half a thread from falling off. We were really, really luck to finish and in third. In the past we’ve seen when the left rear comes off it can land in the stands or it takes somebody else out with you. So we’re in one piece. I’m happy with third. We had a great race between Jonathan and Jeffrey. It was actually a lot of fun. I would have liked to be up there at the end, but congrats to them. I’d like to thank all my sponsors, Ed Shea of course, and Vic and all the guys.”

After a bit of a shaky start to the main event, which saw Ryan Locke pushed to the pit, out for the night, and pitting by Otto Sitterly, before the green dropped, Mike Ordway took immediate command and was quickly alone in front. Jeffrey Battle, Jeff Abold, Perley and Dan Bowes, kept in touch with the 61 until a lap 10 caution fell for Bobby Chartier.

On the restart, Ordway took command and soon was putting some distance on Battle but the action behind the 9 saw McKennedy moving up quickly and into third by lap 12.

While Ordway had set sail, the young Battle was holding back McKennedy, Abold, and Perley. Battle’s teammate Russ Wood moving up in sixth.

A yellow on lap 31 slowed the action when Dan Bowes did a quick spin and recovered to rejoin the field.

McKennedy was ready to pounce when the green fell moving alongside leader Ordway and into the lead on lap 32. But Ordway stuck with the 79 while Perley had moved the 11 into third. Abold, Battle, Dave Danzer, Bobby Timmons, Bowes and Jamie Timmons were behind.

Lap 38 saw McKennedy easily pick up the extra $1000 donated by E.F. Shea Concrete, but the second half of the race would see the action heat up as Perley was now second but Abold wasn’t letting up on the 11, with Ordway just a tick away.

Lap 40 found Abold stealing second from Perley while Ordway held off the Lane cars of Battle and Wood.

The race became more intense as Abold pressured the 79 of McKennedy, with Perley moving close to the 05 on lap 50.

For 25 laps it was McKennedy, Abold and Perley giving it their all up front. Ordway held on to fourth until veteran Russ Wood took over the spot. Wood, running in his 5th decade of racing, did not appear to have lost what he had learned since his inaugural year of 1981.

With ten laps to go, Abold was looking for a way into the lead as Perley began to fade due to his car problems as aforementioned.

Jonathan wasn’t about to give up easily and he was able to put some real estate on the 05-11-97-61 gang behind. And that’s the way they crossed the line. 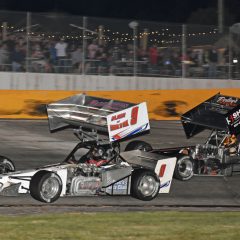 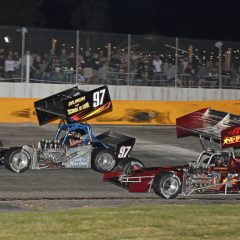 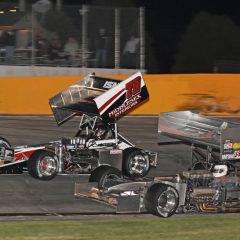 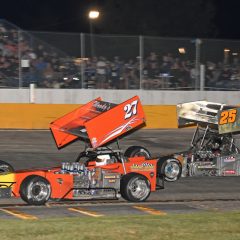 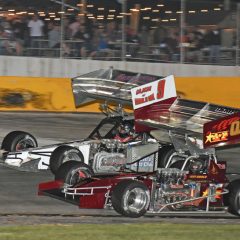 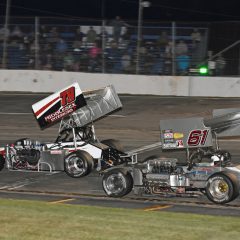 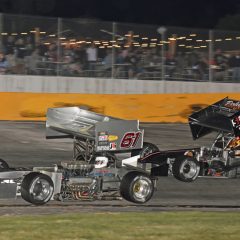 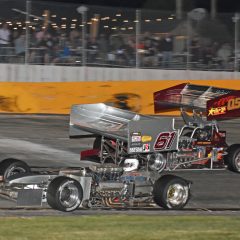 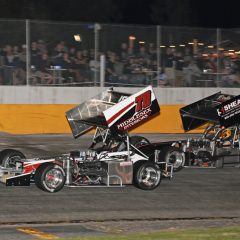 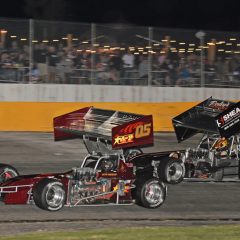 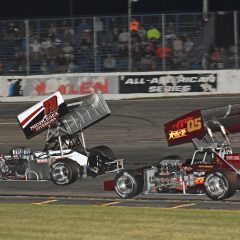 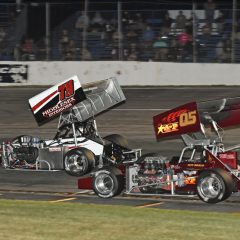 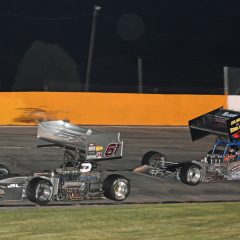 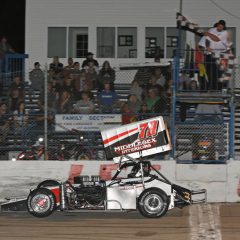 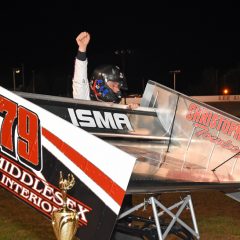 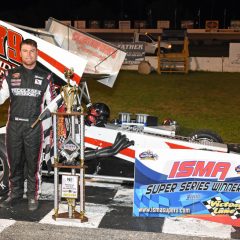 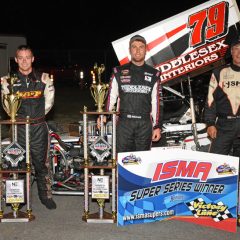 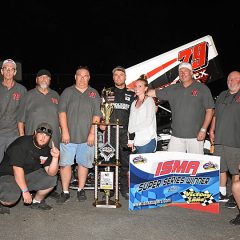 Wood was delighted with his fourth place run. He commented after the race. “By virtue of the draw we ended up starting 12th and we knew we had a rough night ahead of us. There were a lot of good cars with Jonathan, Ordway, Abold, Perley…They were all running pretty good but we all figured if Jonathan didn’t break, he would win. But we are kind of happy with what we had.. It was a little loose but we hung in there, passed a few cars and came home with a fourth in one piece. We’ll take it.”

Ordway who had drawn the pole for his heat and for the feature, described his race: “We just got loose which is typical at Lee Speedway. We were trying some new stuff and we weren’t really ready for it. But, we still salvaged a fifth out of it, coming off Sandusky with the win which was just awesome. The track just got away from us tonight. This is tough. Perley and I were talking earlier and coming here with a short notebook for the first race of the season. This is not a place to do that. We were fortunate to have two good runs under us already. We were coming here with high hopes. Hats off to Jonathan and Jeff Abold. You know Jeff is definitely the long distance racer in supermodifieds. I keep saying the kid amazes me on his ability to drive the race car in long races. Thanks to Clyde Booth, JRI Shocks, Marollo Racing Engines..the engines have been great the last several years. So let’s see what we can do at Star.”