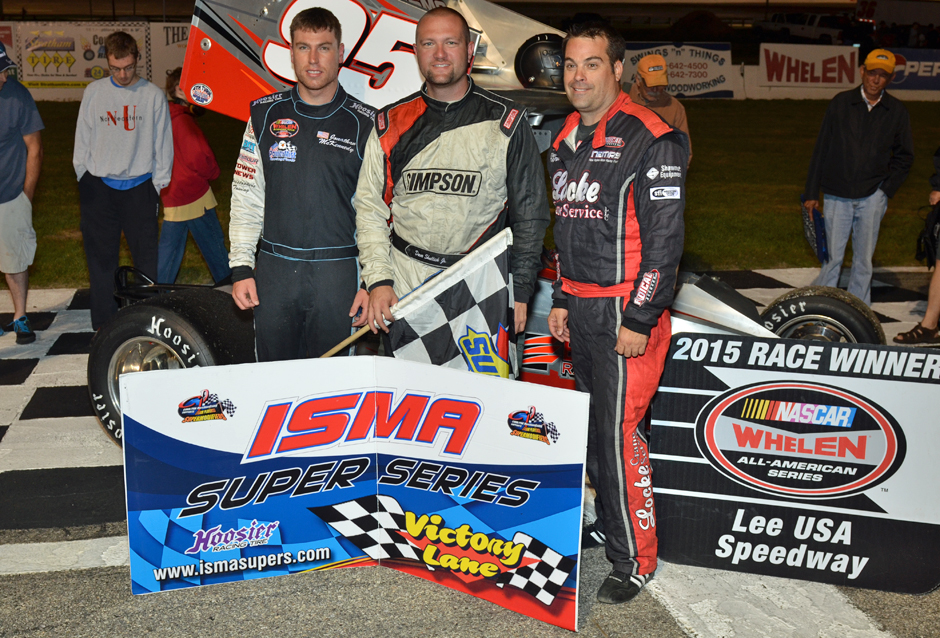 Lee, NH – Ohioan Dave Shullick Jr., was no a stranger to victory lane when he pulled into it at Lee USA last night. He had won the Ollie Silva Classic in 2008 driving the Clyde Booth 61. Friday night he brought his Bodnar-built 95, nicknamed Fire, to continue his quest for a first-ever ISMA championship in 2015. And, winning the 75-lap grind over some of winged supermodified’s best, certainly helped his cause. Going into Lee he was the point leader. He came away with an even stronger lead.

Said Shullick afterwards, “The first two runners were running pretty hard out there. Really I didn’t show my hand until the last ten laps. I had a pretty tight car until ten to go and then I used it up in those last ten laps. I figure it was time to let it all go. I didn’t mind the refueling because it let me know what’s going on around me. When you’re leading you don’t know whose doing what. I saw who was moving a little bit. And the 61 came out of nowhere toward the end but he knows the track pretty well. I told Jon today that he was going to be the one I was racing with. So, I researched him on MyLaps to see what he did the last race so I’d be ready for him.”

Defending race winner Jon McKennedy had moved from 20th to 2nd and was definitely the hard charger of the race. “It was a good run. We struggled in our heat race. We had to start way back. We had a good car. It was a little inconsistent. I tried something for the end. I think at the end we had the car to beat we just ran out of laps. From 20th to second is a good night. I want to thank the crew. They worked pretty hard today. Thanks to all the fans… there was a good crowd today.”

Jeff Locke, who had started 11th was pleased with his podium finish. “It was pretty good. I was just riding around for a while, picking off cars along the way. I can’t thank these guys enough. It’s a good finish for us, a podium finish. Shawmut Equipment, Locke Crane Service. It is nice to be home, twenty minutes from here in Chester and to finish third. It was great for our team. All these guys work hard every week to make sure we get a good race car and go out and have fun. We’ll take it. It was a good run for Dave Shullick and Jon McKennedy. They are fierce competitors. You have to bring your A game with these guys. Thanks to my family for putting up with me. Man this feels good. Waterford tomorrow is totally different. It’s got more grip which is better for the driver.”

Ohio’s Tim Ice held the pole in the 23-car starting field and he quickly took off to take the lead. As Bowes, Shullick, Mark Sammut, Dan Shirey, Timmy Jedrzejek and Chris Perley fell in to challenge.

Yellow fell early when Dave Duggan and Jamie Timmons tangled in turn four. Both would restart, but Timmons then called it a night.

The race restarted but only for a lap when Joey Scanlon spun on the backstretch. Justin Belfiore pitted out of the race in the interim with a broken wing.

Back underway, Ice took off as Bowes battled Shullick for second. Chris Perley was on the move as he too tried to get by the 25 of Bowes.

Yellow flew again on lap 27 when the 14 of Jon Gambuti was parked off turn two.

On this restart, Shullick was able to close the gap on Ice, as Perley finally got by Bowes for third. But yellow flew quickly for the 5 of Scanlon and another restart ensued.

Green fell on the race as it approahed the lap 30 mark. Ice pulled away from Shullick and Perley while Bowes, Timmy Jedrzejek, Mark Sammut, Jeff Locke, Danny Shirey, Mike McVetta, Ben Seitz and Eddie Witkum were still in the hunt.

With a $1000 midway mark bonus donated by Shea Concrete, Ice was not about to let up on his lead. And on lap 38 he collected that $1000, and that would be a comfort to Ice later in the event.

The leader Ice began to lap slower cars at the rear as the race continued green. Shullick was one lap car away from Ice on lap 45 while Jedrzejek moved into third and Jeff Locke fourth as Perley’s 11 began to slip backwards. Mark Sammut, Mike McVetta, Perley, Danny Shirey, Ben Seitz and Jon McKennedy had moved into the top ten by lap 50.

On lap 53, Shullick was finally able to pass by Ice for the lead and left the 65 behind facing Timmy J, Locke and more.

Yellow fell on lap 56 for Mark Sammut, who was facing the infield. McVetta, Bowes, Summers, Perley and Sammut all ended up pitside on this slowdown. Summers and Perley would not return.
On the restart of this circuit, Ben Seitz slowed and stopped off turn four and this would bring the race to a halt for refueling due to the allotted number of fuel caution laps were used.

Misfortune befell Ice at this point as it had been deemed he had passed before the green on the previous caution and he was relegated to the rear despite some protest. Seitz returned to the fray and the race resumed with less than 20 laps remaining.

Shullick pulled easily away but Jedrzejek, Locke, Shirey and now McKennedy were strong challengers behind.

The final race yellow fell on lap 62 when Bowes, who had been running near the front earlier, had incurred a right rear flat which he would change and return to the back.

Shullick was not to be denied this win and would become the first repeat winner of the ISMA season, after notching a win at Delaware on opening day. But back behind the racing was still fast and furious as McKennedy had come alive to challenge Locke who had gotten by Jedrzejek on the restart and Shirey. McKennedy dove under Timmy J on lap 63 and was by Locke for second on lap 65. Behind Locke was now third after passing the 97 with Shirey now in the top five on his first-ever trip to the New Hampshire 3/8ths mile oval.

And when Shullick crossed under the checkers, McKennedy held second with Locke, Jedrzejek and Shirey trailing in a nose to tail line.

Timmy Jedrzejek, one of the Ohions who had made an impact on the finish said later, “We had a solid run tonight. Just got a little tight at the end. We gave up a couple spots there. We have a lot to be proud of tonight. We had a good car. It’s tricky here. I don’t have a lot of time at this track. I think we paced ourself real nice. We were at a good spot running second there for a while. Congrats to DJ and the 95. We had nothing for him. We gave the second away on the last restart. I just couldn’t hold the car down and the 61 and 37 got by me. Congratulations to the top three. We’re in one piece and we’re ready for Waterford tomorrow.”

Probably the most excited with his top five was Amherst, Ohio’s Dan Shirey, a second generation driver for the Stout team. Said Shirey “Obviously I had a good day. Started off with a heat win and got a fifth in the feature. We made a lot of adjustments and they were the right ones. Steve, Rich and the whole crew worked their butts off all day to put a good car under me. It got a little tight toward the end. I thought I could put a wheel on Timmy but he’s a veteran driver and he’s good at keeping his position. Hats off to every body. It was a tricky track. For my first time here I had a good run. No complaints. Thanks to the whole ACME crew.”