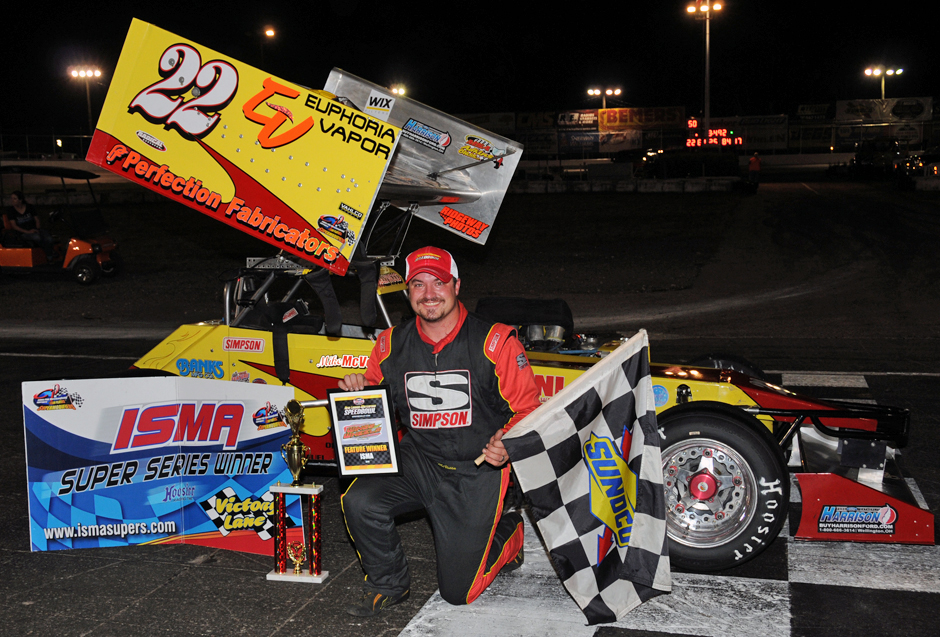 Waterford, CT – Ohio’s Mike McVetta led two-thirds of the Ollie Silva Memorial Friday night until a broken wheel cost him what might have been a third career ISMA win. Saturday night, he earned redemption at the New London-Waterford Speedbowl’s Wings and Wheels 50. Starting on the pole, McVetta took command in the race and in a blink of the eye, cruised to victory.

The 50-lapper went green to checkered in 11 minutes and 11 seconds and although Mike Ordway Jr. tried to track McVetta down, he fell short in the rapid-fire display of winged speed.

The name Rocket Man is imprinted on the yellow and red 22 as many know, possibly as much for the fact that McVetta works at NASA as for his racing. Saturday, the nickname was for speed as he was fast all day, won his heat and then led the entire way in the feature in only his second time ever at the Connecticut speedplant. The ever affable McVetta related his thoughts on the weekend.

“We had such a great car last night only to lead 50 laps and then come up short with a broken wheel. To come here and run as good as we did all day today, winning our heat and then winning the feature is just an unbelievable feeling. Especially when it’s only the second time I’ve been here. The race never even got to lap traffic. There are so many good cars in this group that there just wasn’t any lap traffic. I don’t know if that helped us or hurt us The outcome was good either way.

“ISMA is just the best of the best. To win three races is unbelievable; just to win one is unbelievable, actually. There are people who race their entire career and don’t get one. So I am super blessed to be in the position I am in. I have the greatest people behind me that allow me to do what I love to do. There’s Dad and Mom, Doug, Dean, Nick, my wife Gina, daughter Stella, Perfection Fabricators, Euphoria Vapors, Cerni Truck, Fallsway Equipment, Bank’s Manufacturing, 4th Turn Crazies, Adkins Glass, and TS Photography. I wouldn’t be here without them.”

Mike Ordway Jr., as aforementioned, was the only possible game-changer. But, he was okay with the way things worked out as he learns his new ride.

“We just started seventh and got to the front as quick as we could as the race went green to checkered. Clyde and the guys gave me a good car. I have to thank them; and everybody that helps, Marollo Racing Engine, JRI Shocks, and Harrington Paving. We just used up a little bit too much trying to get up there. We got to second and we ran McVetta down from about a straightaway. but just didn’t have anything left for him. I don’t know if a yellow would have helped. It might have in the aspect that I wouldn’t have had to run him down. I might have had a little for him then. But he was pretty good. We had a second tonight and a third last night. That’s a good weekend. We’ll take it to Delaware now.”

A new face breaking onto the podium scene was Dan Bowes, of Byfield, Mass., who had also won a heat earlier on the hot, humid day.

“We finally got a good run. We have struggled very hard, for years really, but especially this year where we’ve had some bad luck. So to finally get a good run feels pretty good. I have to thank my father. He’s put an immense amount of time on this race car. I’m really happy I got a good run for him. My crew member Mike Caswell does so much. He’s a huge help as well. Thanks to Northeast Metals Technologies, L.B. Marston and Associates, and CDC Precision Machine. Also a big thanks goes to Brian Allegresso and New England Motor Racing Supply. They’ve done a lot to help us out on the car this year. Many thanks to them as well. We’re working on our new car and hoping to get it ready for Oswego. Brian and Butch Valley Sr. are building it at New England Motor Racing. It’s almost done. Just finishing up the final stuff.”

Due to the handicapping, McVetta and Bowes led the way for the second consecutive night and McVetta once again took over with Bowes staying right there in second as Ben Seitz, Trent Stephens Eddie Witkum, Timmy Jedrzejek and Ordway were sorting things out right behind.

Both Joey Payne, in the Penix 3 and Danny Shirey in the Stout 49 exited the fray prior to lap 10 with mechanical difficulties. No yellow flew as the two were able to make it to the infield area safely.

The movers in the field were Ordway Jr. and Lichty as McVetta picked up the pace and put some distance on Bowes, who was hanging tough in second. At the flying of the halfway flags, Ordway was fourth, having passed Stephens, and Ed Witkum Jr. Timmy J and Lichty were right off the stern.

By lap 28, Ordway had made it to third, grabbing the spot from Seitz as Stephens held fifth.

On lap 30, the scoreboard showed Ordway in second, giving it his all to catch up to McVetta. Bowes, Seitz and Stephens were still top five.

Ordway faced an almost unsurmountable task of catching up to the rocketing McVetta., but he was not giving up. Lap after lap, the 61 edged closer to the 22, possibly hoping for a yellow to give him the opportunity he needed. It never came as the laps clicked off in torrid fashion.

Ordway got his closest around the 5-to-go mark, but at the speed the race was moving, there was little time left to catch the 22. Back in the field Lichty, fighting for points in the close 2016 ISMA point race, was able to pick off Seitz for fourth as the double checkers flew for McVetta. In only his second full year in ISMA, he had his third win trailed by Ordway and Bowes.! Lichty and Seitz just missed the podium, but were content with the outcome.

“We’ll take a fourth, said Lichty. “Obviously we would have liked to finish a little better. It’s tough with no cautions. Somebody said the race took just over 11 minutes. We definitely could have used a caution just to cool the tires down. We were a little loose, but we made the best of it. So, we’ll move on to Delaware and see what happens. I’d like to thank everybody that sponsors our ISMA group and our team sponsors: Reed’s Salvage, Craig Reed, my father, Patco Transportation, Dennis Level of Level Performance, Raven and the whole crew. We look forward to the Delaware race in Canada in a couple weeks.”

Seitz, who debuted a new car in the latter stages of 2015, was pleased that the team is making progress. “The car is pretty good. We’re figuring the bugs out. We have a lot more to go. But, we’ll take the fifth place and move on to Delaware. It’s nice to race in Connecticut at Waterford. A lot of my sponsors -Sam Lorruso & Sons, Lorruso Heavy Equipment, Cape Cod Aggregates and family were here. It was a good day. I wish we could have done better in the race. As I said, we’ll go back to Delaware now and hopefully woop ’em.”