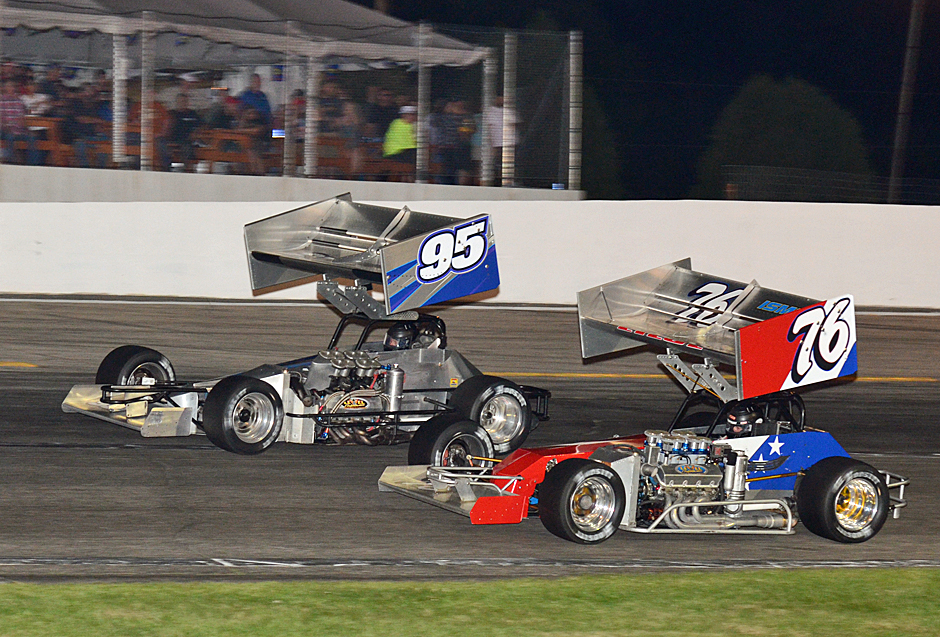 Lee, NH – Last season Dave Shullick won his second Ollie Silva Memorial 75 on his way to a first-ever ISMA championship. He was battling Mike Lichty for that ISMA title. In 2016 he and Lichty were again in a title battle going into Lee. Shullick, starting 10th, had to run down a high-flying duo up front in Mike McVetta and Mike Ordway Jr. to put the 95 into a position to pounce.

But Lichty was also in the mix past halfway, moving by Shullick on lap 49 and then McVetta on lap 50. McVetta had a wheel break and pitted shortly thereafter leaving Lichty and Shullick to battle up front. Shullick went high and low looking for a way by the 84, finally taking the lead on lap 56. The second generation Ohio driver had control from there on in, taking the checkered with a healthy margin less than 20 laps later. Shullick had the race mapped out prior to the race, and 75 laps after the green dropped, Shoe II was right where he wanted to be – in victory lane.

“It was a good run tonight I had a game plan going in – kind of like where I wanted to be on what lap. I stayed with it. It played out a little differently than I thought. Mike Lichty came out of nowhere and I had to change my game plan slightly. But it worked out good. It put us in a good position at the end to use it up. Thanks to Royal Purple Synthetic Oils, Elios Financial Group and Level Performance Racing Engines for building a helluva good engine. We are having a good year. Got to keep it going. It’s on to Waterford.”

Lichty had mixed feelings about second. He had a tough drive to get him there but had things been different in qualifying, it might have been easier.

“Second is not a bad deal for us here. We’ll take it. We worked on the car all day. We made some changes and kept working on it, working on it. The car was pretty good. It was a little free and then I’d get a little tight in spots. We just missed it a little bit. Unfortunately, the guy we are fighting for in the championship won, so we lost some more points tonight. We lost our heat starting spot and had to start last, lost points there and then started 13th in the feature. If we’d started in our spot in the heat, chances are we would have gotten the invert and would have probably started 7th or 8th. So we had to use a lot of tire up to get to the front.

“But, we’ll move on to Waterford where we won last year. I know we’ll have a good car there. We’ll just keep plugging away. I have to thank all the guys on the team, Reed’s Salvage and Patco Transportation. I want to also thank all the people who support ISMA, Corr/Pak Merchandising, Hoosier Tire, Eddie Shea and everybody who puts money into the deal, because without them this would definitely be tough to do.”

Mike Ordway Jr., ran near the front all race long, keeping tabs on Mike McVetta for over half the race until Shullick and Lichty got by and McVetta had to pit for repairs. He said after the race, “We had a good run. We maybe over-adjusted the car a little bit and it didn’t really come in as much as we thought it was going to. To start up front and run up front all night and come home with a third was pretty good. It was nice not to have to drive fourteen hours to race. This right down the street from home, Overall it was a good night. We’re looking forward to tomorrow. We have a really good baseline to go off of. We’re going to debrief here with Clyde when we are done and figure out what we needed different tonight and what we need to start out with tomorrow. We’ll go from there.”

Dan Bowes and Mike McVetta led the way at the start with McVetta jumping to an early lead as Ordway Jr. dove past Bowes to begin his pursuit of McVetta. Bowes drifted back to third with Ben Seitz, Eddie Witkum and Trent Stephens right behind.

McVetta continued up front, able to pull slightly away from Ordway until a yellow on lap 15 slowed the race. Jim Paller’s 64 had broken a torque arm and had hit hard in the wall between 1 and 2. Danny Shirey stopped during the yellow with a loose fuel cap which was fixed and he went to the tail of the field on the restart.

McVetta, rocketed out to the lead on the restart and once again began to build up a lead over Ordway until yellow flew again for Justin Belfiore who backed into turn three. He was able to return but pitted several laps later.

It was McVetta, Ordway, Seitz, Bowes, Shullick, Moe Lilje, Trent Stephens and Chris Perley behind but on the move was Lichty who was up to seventh as McVetta tried to run and hide. On lap 30, Shullick was creeping up and he moved into fourth and then third two laps later. His game plan was on.

On lap 37 McVetta picked up the $1000 halfway award donated by Ed Shea of Shea Concrete, which would help sooth the heartbreak he would experience later.

By lap 38, Seitz had exited the track with rear end problems and Bowes followed a lap later. The race for the lead was fast and furious as McVetta felt the onslaught of both Shullick and Lichty. Lichty got alongside Shullick on lap 45 and headed for McVetta with Shullick now third.

Lichty moved up on McVetta and was able to get by in turn three on lap 49. Moments later the great run by the Ohio driver ended, when his wheel broke right in front of Shullick who was able get by with a brush off the 22. McVetta was able to pit and repair the 22, going to the end of the field from the front.

The race continued now between Lichty and Shullick with Ordway still watching the action in front of him. Lilje, Stephens, Perley, Mark Sammut and Timmy Jedrzejek were watching slightly behind.

On lap 55, Shullick, after trying the 84 high and low, and was able to take the lead but Lichty did not go away as the duo raced out front. Ordway still had them in sight as Lilje was fourth and Stephens and Perley raced for fifth.

In the waning laps Shullick would finally put a lap car in between his 95 and the 84 of Lichty, as Ordway was still holding onto third. Lilje, Stephens, Perley, Sammut and Jedrzejek were still fighting for positions when the flag dropped for Shullick on lap 75. It was Shullick’s second consecutive Silva Memorial and third overall with a win in 2008 in the Booth car. It was also his fourth overall win this season.

Lilje had another strong run in the Jimmy Bodnar 76. He said later, “I think we had a pretty solid race car throughout the race. DJ and I got together. I got a little impatient and kind of stuck the car some where I shouldn’t have and ended up getting squeezed in the fence but that was my fault. Fortunately it didn’t put either car out of the race. From then on I kind of had my hands full. It was wasn’t quite as good as before I stuffed myself in the fence. All in all, we stayed out there and everything stayed together. And we came home with another solid run.”

Finishing in fifth, after a heartbreaking end to a possible winning run at Sandusky, was Trent Stephens who indicated. “I started sixth and finished fifth. We had a pretty good run, not the greatest. Considering how awful we were last year, I’m pretty happy with a fifth place run. We had a completely different setup in the car. I thought we had something but we missed something in the feature. The car didn’t handle where it should have been. Unfortunately, it was a top five instead of a win. I don’t think we were too terrible far off, but hopefully we can come back next year and do better. I think we finished 13th here last year and moved up eight spots this year. Maybe we can gain five spots next year! I’ve got to thank all my guys. It was a fifteen hour drive up here and they still gave me a good car.”