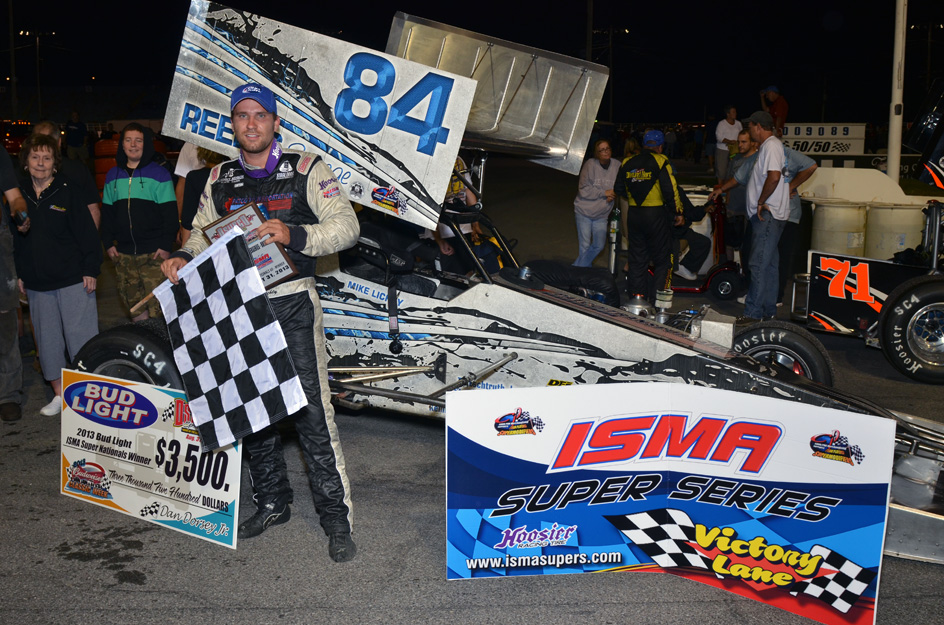 Oswego, NY – In July, Canadian Mike Lichty was on fire when he came to Oswego for the King of Wings. He not only set a new track record, but also dominated the race to take home the prestigious KoW crown. Saturday night at the 20th annual running of the Bud Light Oswego Super Nationals, Lichty could not hold onto his recently set track record, which was topped by Dave Shullick Jr., but he was able to dominate the 60-lapper to claim his first Super Nationals victory worth $3500. Lichty would also confiscate the top prize of $2,000 in the Shea Concrete ‘Steel Palace’ ISMA Super Series finale. Going into the night’s racing, the 4-race Steel Palace series was led by Chris Perley with Lou Cicconi second, Lichty third, Mark Sammut, fourth and Tim Ice fifth. Lichty was able to jump to the top of the charts with his victory.

A last place finish at Sunset Speedway gave Lichty an edge in the handicapping and a third place starting spot in the feature. And, Mike was well aware that there were some heavy hitters right behind him. “I just got out there as soon as I could. With Chris Perley and Louie back there I knew they were going to come at some point. The biggest thing was to just run as conservative as possible and keep the right rear under me. To win both shows here at Oswego – the King of Wings and now this one is pretty close to perfect. We have a long ways to go tomorrow to pull off Classic win. But, it’s 200 laps and it means that you have to put yourself in the right position and stay clear of the wrecks and what not. We are definitely going to give it our best shot.

“I just want to thank everybody at Reed’s Salvage, PATCO Transportation, my father, Craig Reed, Dianna Reed, my girlfriend Raven, Dickie, Ryan, my sponsors – everybody that works on or helps the team. I was a little disappointed in time trials. We were a little tight. But I can’t thank everyone enough for their hard work.”

Dave Shullick, who was the owner of the new Oswego track record after setting a torrid 14.972 lap in time trials, came up from twelfth into second with just a dozen laps remaining in the race. “I think we clearly showed we had the fastest car here tonight. We started twelfth and passed our away to the front. We didn’t have the advantage of starting up front today. One day we’re going to get to start up there and they won’t catch us. The first 50 laps the car was free. This car tightens up and I knew it would. I just stayed with it and it came around. At the end it was real good. The last ten laps I had a pretty bad vibration. So, I didn’t try and make a run at it. I was just trying to get it home.

“Hats off to Jim Bodnar and the crew. I had some guys from the 15 crew up here helping us today. I have to thank everyone who pitches in. Kim and Kevin Enders – all they do for us is awesome. They build an engine with helluva horsepower. Elios Financial Group and Oswego Speedway for putting on one helluva Classic.”

Lou Cicconi who lost second place in the waning laps, said succinctly of his podium finish, “Well, the car got real loose toward the end of the race. It was all I could do to finish where I did. The car was definitely better at the beginning. The car just went away and I didn’t have anything left at the end. And that same lap car christened everybody again.”

The race was led to green by Joey Payne, driving the Lane 97 and Rob Summers in the Lichty 74. Not one lap was complete before yellow flew for a tail of the field mishap, which saw Tim Ice and Mike McVetta on hooks, and Bob Magner and Lou LeVea Sr. pushed into the pits. Only McVetta and LeVea were able to restart as the race resumed.

Payne was able to reclaim his lead on the green while Lichty moved quickly by Summers for second. Heartbreak hit Jon McKennedy, one of the faster cars in time trials, soon thereafter when he hobbled into the pits with a broken wing strut.

Lichty deftly moved by Payne in turn one of lap four and had put a couple car lengths on the 97 before the clock ticked to five. Lichty then took advantage of a long green period to put a good distance on the pack of Payne, Cicconi, Summers. Alison Cumens, Jeff Locke, Ben Seitz and Perley.

A yellow bunched the field on lap 21 just as Cicconi was about to make a move on Payne for the lead. Ryan Coniam experienced fuel pickup problems here and after three stops on the track, was sent pitside before the green was able to stick.

Twenty-seven caution-free laps flew by as Lichty cruised out front. Cicconi had finalized his pass of Payne shortly after the restart leaving Payne to fend off Cumens and Summers. Back in the pack, Shullick was the man to watch as the Bodnar-built 94 was on the move.

Lichty and Cicconi lapped at the tail of the field by the 32nd marker. Lichty was able to use a couple laps cars to pull away from Cicconi.

With 20 to go, Lichty was in control as Cicconi had been stymied a bit by some slower cars. This also allowed Shullick to move around Payne and Cumens for the third place spot. Shortly thereafter, Cumens, running a magnificent race, pulled around Payne for fourth and headed for the top three.

On lap 48, Payne slowed and brought out the yellow as he headed for the pits. Bobby Chartier did likewise ending his race here also.

With just over 10 to go, the green dropped for Lichty out front as a lap car held up Cicconi’s forward march. Shullick was able to steal second in the interim, leaving Cumens to nip at Cicconi’s heels. Summers, Seitz, Perley, Dave Gruel, Locke, Ray Graham, Timmy Jedrzejek and more were still racing hard behind.

With five to go, it was apparent Lichty had his first Super Nationals in the record books as Shullick ran a distance behind but it was Cumens who made a charge at Cicconi for what would have been her third podium finish of the season. But the race ran out before she got her chance, leaving Lichty, Shullick and Cicconi to head for the podium. Cumens and Summers rounded out the top five. The win for Lichty was his third at Oswego, the first came at the King of Wings in 2011.

The recent Penn State grad Cumens was once again surrounded by a growing group of fans and had this comment, “The run was great for me. When we had that second caution I want to say, afterwards I had a little bit of motor problems. We’re not quite sure what they are yet. That’s why I kind of got stuck behind Joey for a little bit. So then for some reason the motor cleared out and I got around him after another caution. I was just catching Louie there when the race ended. It was fun.”

And, Summers, not having the best year of his career, “I have to thank Brad and Mike Lichty, Patco Transportation, Reed’s Salvage, they give me a car every week. We’ve struggled this year but I think we’re finally starting to get a handle on it. We got a top five tonight but I wish it was 75 laps because the car was getting better and better. We had a good car and I’m happy with it. It’s just glad for Mike winning the big race. It was a good night for everybody. We’ll head for Star now and maybe we can get a podium or a win.