SHULLICK WINS AT OSWEGO FOR SECOND TIME OF 2014 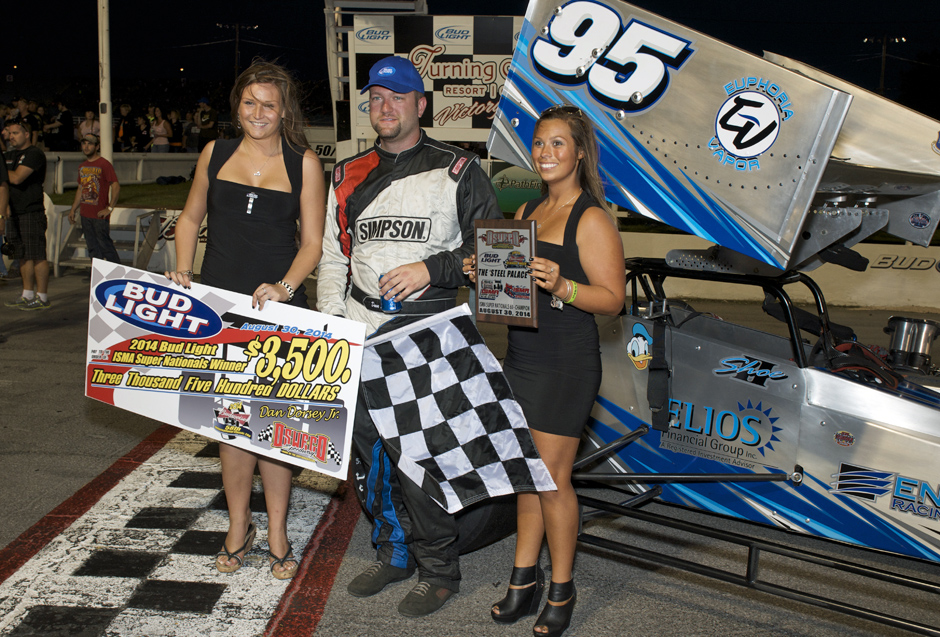 OSWEGO, NY – Ohio’s Dave Shullick Jr. had the fastest car on Saturday at Oswego Speedway (NY), but it turned out to be a hard fought International Supermodified Association win at the end of the 60-lap ISMA Bud Light Super Nationals feature event.

Shullick, the winner of the “King of the Wings” event at Oswego earlier in the year, broke his own track record with a lap time of 14.938 seconds around the 5/8-mile track during time trials.

He seemed to be in control during the closing stages of the race but due in part to lapped cars, Ontario’s Mike Lichty narrowed the margin on Shullick and even attempted to get under him at times, including on the final lap.

“A lot of people were in the groove racing and we just had to do the best we could,” said Shullick. “He caught me on the last lap with the traffic, and I just drove it into three and it stuck so it was the difference in the race.”

Jeff Locke led the field to green and pulled away from the start. Meanwhile, Shullick worked on navigating around Rob Summers, Lichty, and point leader coming in Jon McKennedy from his sixth starting position.

Without the aid of any cautions, Shullick was able to catch Locke within 10 laps of gaining second, and secured the lead on lap 28. Lichty was also able to get by Locke on the ensuing lap.

The first of two yellow flags would fly shortly after halfway when Jamie Timmons spun in turn four. This and the next caution just over 10 laps later would allow the field to bunch up, but the front two would pull away from the remainder of the field on the restarts.

During the final 15 lap stretch, slower cars would play a major factor. Lichty tried all he could to make the lapped traffic work in his favor, but it was also a change he made that kept him with Shullick.

“I actually learned something pretty significant about 20 laps from the end,” said Lichty. “I started changing my line fairly drastic on entry into one and actually was able to reel him in. Without lapped traffic we weren’t going to pass him at all. Unfortunately it worked out better for him than us.”

This was Shullick’s first victory in the Bud Light ISMA Super Nationals 60-lap feature, which takes place during the prestigious Budweiser Classic Weekend at the “Steel Palace.”

“It’s huge,” Shullick said of his win on Saturday night. “The Super Nationals are one of the biggest races of the year for us.”

Summers, Chris Perley, and Otto Sitterly rounded out the top-five.

As a result of taking the lead prior to halfway, Dave Shullick Jr. also led the most laps (33) on Saturday night and claimed the Radical Racegear Lap Leader Award. Shullick will receive a $100 Radical Racegear product certificate for his performance.

Dave Duggan used both caution flag periods to come into the pits for adjustments and stayed out of trouble for a 15th-place finish. Duggan started from the 24th position and gained a total of nine positions during the 60-lap event to claim the $100 Hard Charger Award sponsored by “Support the DT100 for Make-A-Wish.”

As is a tradition whenever the ISMA Supermodifieds are in town, a lucky fan in the grandstands on Saturday night took home a free bicycle in the ISMA Free Bike Giveaway presented by Corr/Pak Merchandising in Ontario, Canada.

The ISMA Super Modifieds will be back in action on Saturday, September 6 for the prestigious Star Classic at Star Speedway in Epping, New Hampshire.

$50 – 8th place finisher in heats “In Honor of Jim Shampine”