SHULLICK RACES TO WIN NO. 3 OF ISMA SEASON AT DELAWARE 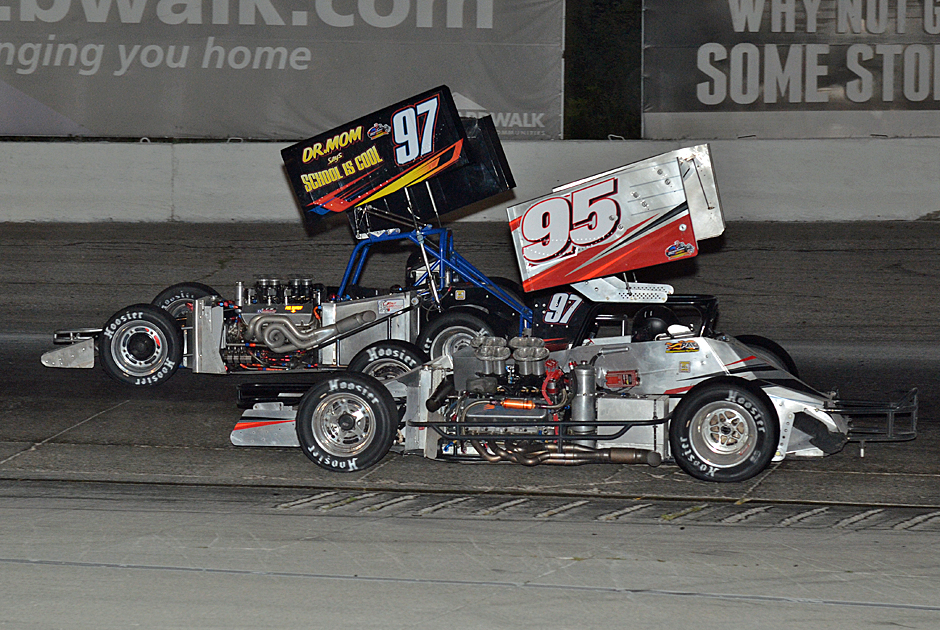 Delaware, Ontario – Dave Shullick Jr. opened the ISMA season with a last lap pass win at Delaware International Speedway in May. Shullick of North Ridgeville, Ohio came back strong to win the 75-lap ISMA Super Modified main event presented by Don-Mor Carstar Friday evening in front of a packed house at Delaware Speedway.  Shullick, who started fourth in the event, was the ISMA points leader entering the evening and his strong performance ensures that he left the night with that lead intact. It was Shullick’s third win of the 2015 season.

Said Dave in victory lane, “I really like this place now. I love the bumps actually. It’s a lot of fun to race. I know this car really well. It started out a little free but this car tightens up as it goes. You just have to stick with it. I had a lot left at the end. I really did. On the last I was getting hand signals. I was cruising and saw the 84 pop up. So the last 5 or 6 laps I was going at a pretty good clip. But the car was really good at the end of the race.

Commenting on taking the lead on the last restart, “I kind of knew under the red flag that he was getting really loose. I told these guys that I didn’t want to sound too confident but I knew we had a good car and he was really loose so I saw that coming. I’ve got to thank Jim Bodnar, my dad Dave Shullick Sr., the crew, Mark, Enders Racing Engines, Helios Financial Group and everybody for helping us out. Thanks to all the fans also for coming out. I love racing in front of you Canadians. We come up here a couple times a year and you guys come out for us. So I appreciate it. The championship is not over by a long stretch. There are three races left – Oswego, Star and Thompson. The car is running good and we just have to keep it going.”

Mike Lichty, who gained some ground on that same restart as Shullick mentioned, said of the situation, “I don’t know if some thing broke on the 97 but he kind of checked the two cars that were ahead of me. The bottom was open and I just took an opportunity. It was a good run. We started 18th and we definitely didn’t have the greatest car. But everybody worked hard today. I’m happy to come out second. I want to thank Reed’s Salvage, Patco Transportation and all the Canadian fans for coming out.”

Ben Seitz, who has been a winner at Delaware in the past, parked it in third at race end. “The car was good. We had a good run. It was a tough race. There was a lot of back and forth battling among the drivers. The oil in the middle of the race pretty much ruined the racetrack. Everyone was slipping and sliding. It was a tough We lost a spot on that last restart when the 97 didn’t take off. I think something was breaking on the car. I don’t know what happened but it kind of cost us a spot. I need to thank my sponsors Sam Lorusso and Cape Cod Aggregates. We’ll take our third and fight hard at Oswego.”

Trent Stephens (#19) of Ravenna, Ohio led the opening 48 laps of the event before being passed by Tim Jedrzejek (#97) of Independence, Ohio.  Just prior to that lead change there was a fierce on-track battle around lap thirty between Stephens, Tim Jedrzejek, and Ben Seitz for the top spot.

On the second-last caution Shullick would make his move getting the best of Jedrzejek, with a right front tire going down, and pulling to a half-straight lead almost immediately.

Caution would fly once more on lap 66. When the 21 of Ed Witkum spins.

On that final restart Mike Lichty (#84) of Innerkip, Ontario would manage to vault himself from sixth place all the way up to second where he would finish. Ben Seitz (#17) of Bourne, MA would finish third, followed by Jeff Locke, and Trent Stephens in the top five.

Locke, who won his first career ISMA feature on a Friday night at Delaware, was once again in contention. “We had a good run. We finished fourth. We lost the brakes half way through and it kind of put a damper on things. It was a tough race. The track was slick and I’m loosing my brakes. It was one of the hardest races I’ve driven. But the car was really good and we’re looking forward to the rest of the year. These guys work hard for us to come home fourth and to come here and have a good time. We appreciate all the fans for sticking with us.”

Trent Stephens, who had a much better finish in August than he had had in May at Delaware, commented, “I guess I had bad luck. I think when I was leading, the track got oiled down. It kind of screwed me up. It bothered me because I think I was the first one hitting it. I didn’t know what the heck was going on. By the time I realized there was something on the track it was too late. I just had a lot of bad luck. I think I had a lot better car than fifth. I think I probably had a second or first place car. Sometimes you just don’t get lucky. I definitely have to thank all my crew. They’ve done a real good job especially the last couple weeks. We had a rough time in New England. Then we came back and went through the car again. And it was pretty damn quick tonight. We’ll regroup and move on to Oswego and hope the car is this good there.”

On Sept. 5th ISMA heads to the 22nd running of the Bud Light Super Nationals, a part of the 3-day Budweiser International Classic weekend at Oswego Speedway. Shullick Jr. is the defending champion of this event.