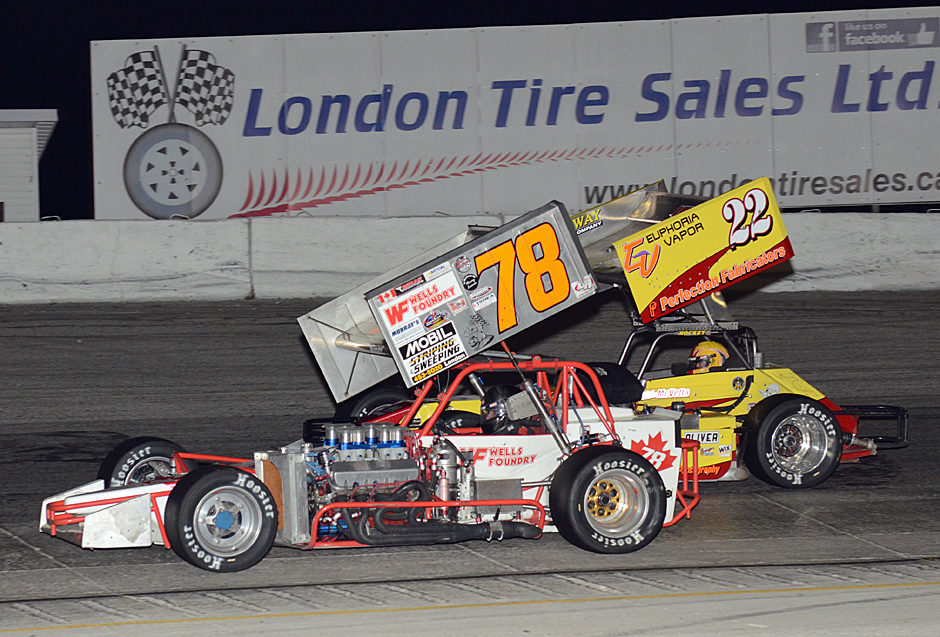 Delaware, Ont., Canada – They say good things come to those who wait and for London, Ontario’s Mark Sammut that wait for a feature win at Delaware was 21 years in the making. Sammut, who calls Delaware Speedway his home track, had raced many times at the half-mile oval over his long career, but had never won a supermodified feature there. He’d come close, but Saturday night he nailed it, picking up his 6th career ISMA win but first victory at Delaware, which was also a very lucrative one that carried a $10,000 first place prize, sponsored by Corr/Pak Merchandising, Arctic Snowplows, Murray’s Transmission and PATCO Transportation.

Sammut drove his familiar 78 around race leader Mike McVetta on lap 29 and held on to that lead for the remainder of the race, despite some serious challenges by the Ohio driver who tried to reclaim the spot. Sammut drove under the checkered flags to a thunderous applause from the many Canadian fans on hand. It was a popular victory to say the least.

Sammut commented about his run amidst the crowd of well-wishers in victory lane, “This is unbelievable the way this year has gone. It’s been a combination of things. We’re not blaming any one thing like tires, it’s just been a a rough year so far. But this makes up for it, let me tell you. The number of races I’ve had at Delaware – I mean I’ve won heat races, but it was 21 years ago that I won a feature here and it was in a midget. So it sure makes it nice to get back here in front of the hometown fans!

“I knew we had a good car but we were getting so loose at the end. And, every time I’d get ahead a little bit, Mike would get beside me and show me a wheel. And then I had no choice but to go. At the end I tried to just keep it tight on the bottom and if he was going to pass me it would have to be by going around. I have to give him a lot of credit. He was driving a lot different line than I was, he was way up high which was probably easier on the tires. But it was leaving me on the bottom. Earlier in the day I was trying to run the top but I had to ride the car too hard and was getting out of shape. So I figured I’d better back off a little bit and run the bottom and that worked out. There were two fast cars running side by side several times in the race and we never touched each other once. So it can be done. I have to thank the crew, my family and my sponsors Art Currie Ltd., Wells Foundry, Mobil Services and Murray’s Transmission for all their support.”

Mike McVetta, who earlier in the day looked like he might not even be able to race after a crash in warmups left the 22 in bad shape. He acknowledged that the day might have turned out quite differently had it not been for a lot of work.

Standing on the podium after his long day, Mike smiled and said, “From wreckers in practice, to sitting on the front straightaway at the end of the race is great. We really can’t complain with that kind of run. The car is torn up pretty bad still but and we still have some issues up front, but this was a good run for us. We are really on a good stretch now after those two dnfs, we’re sitting with a second, a fourth and a second. Hopefully we can keep that up. We could get real close to Mark there but unfortunately we needed a long green flag run and that caution just took my steam away. I was getting better and he was slowing down. Hats off to my guys for getting this thing back together and even to be able to turn around the track after how bad it was earlier. I couldn’t have done it without them.”

Third place finisher Dan Bowes, also had a rough start to his day. “At the end of the day I had a pretty solid run. I started the day off with some engine issues with the magneto. I pretty much missed all of practice, getting only about eight or ten laps. To set fast time and to transfer through the heat race to get into the redraw and start up front was something. We were just way too tight from lap one. Mark and McVetta got around me and got away from me. I had to drop back a little bit. I could run them down and get a few car lengths away from them but I just complete lost the nose on my car and got wicked tight. Third is about all I could manage unless we got into lap traffic, which didn’t come at the end there. So a good run and it will make us feel better driving all the way home.

Attrition from the previous week’s double New England shows, pared the ISMA field down to a lighter than normal count, with only fourteen cars able to make the trip north of the border. After time trials and two heats, Moe Lilje and fast time trialer Dan Bowes led the way to start the 75-lap event which would pay $10,000 to the winner.

Bowes only got in three laps out front when a three car tangle in between turns one and two, flew the yellow. Lee USA winner Michael Muldoon, Dave McKnight and Ryan Litt, piloting the Stout 49, were involved. All three pitted with only Muldoon able to continue.

Bowes took off on the restart with Chris Perley, a winner at Delaware in 2006, moving in on the 25. McVetta joined the top two almost immediately and made a move on Perley for second, but on lap 8 the 11 suddenly pulled pitside, and was out of the action. At the same time, McVetta grabbed second and then the lead almost simultaneously. Mark Sammut moved by Bowes soon thereafter, leaving Bowes back in third, with Trent Stephens, Jon McKennedy, Timmy Jedrzejek, Mike Lichty and Kyle Edwards trailing.

The race settled into a long green stretch now as McVetta and Sammut moved out front, leaving Bowes a solo third as Stephens kept within sight. By lap 25, the lead duo was coming up and passing a slower car and several laps later Sammut was able to pass under McVetta for the lead.

By the midway mark of the race, Sammut had pulled away slightly from McVetta and Bowes, with Timmy Jedrzejek moving around a lap car to take fourth. Stephens, McKennedy and Lichty were next in line at this point.

As the laps flew by it was apparent that McVetta and Bowes had not given up in their chance at $10,000 as they slowly closed up the gap between their cars and the 78.

Sammut was able to put a lap car in between his car and the 22 and 25 on lap 50 with Jedrzejek holding on to fourth as McKennedy, Lichty and Edwards raced behind the ISMA point leader.

Dave McKnight, who had left the race much earlier, brought the 70 back out onto the track around lap 55 to throw a bit of a monkey wrench into the the top three as he entered the track just ahead of Bowes on lap 55 with the 25 now loosing some ground to the leaders.

With fifteen to go, the race between Sammut and McVetta heated up with the 22 showing a wheel to the 78 multi-times, but things came to a halt on lap 65 when yellow flew for the 19 of Stephens.

This stop brought the top five nose to tail on the restart and a ten lap shootout. All eyes were on the duo up front as the epic battle which had ensued up front was about to conclude. McVetta, who had been trying everything he could with his battered car to get by Sammut most of the race, had one last chance and he used every lap remaining to try to unseat the Canadian driver, but to no avail. The top five order of Sammut, McVetta, Bowes, Jedrzejek and Lichty pretty much stayed the same until the final lap when Lichty caught Jedrzejek and the pair swapped places on the final lap.

Said Lichty of his fourth place, “It was obviously not what we wanted after coming from last year where we won the show. We knew we were kind of a disadvantage coming into it with the other car. We had some problems with it last week and were not able to bring it. It’s the same old story – lack of passing. I heard it was a pretty decent show up front so that’s good. And it was pretty good for Mark to keep it home in Canada which is cool. It was an unfortunate situation with the low car count but I hope we put on the best show we could. I just have to thank everybody – Corr/Pak, PATCO Transportation, Murray’s Transmission, and Arctic Equipment and Snowplows for putting up the extra money. And everybody who helps us, Craig Reed and the whole gang.”

“Well we’re pleased with fifth place. We had a decent points race and now we’re down to three races left. Howie Lane and the entire crew did a great job. We had some good speed in the car but we kind of got all strung out there. When the caution came near the end of the race there we just totally lost all traction in the car. We were up to fourth and we lost a spot to Mikey at the end. Congrats to the whole Sammut crew on their win on their home turf. To see and hear the crowd applaud them at the end was pretty cool. Now we are on to Oswego. I just want to thank. Dr. Mom Says School is Cool, Enerco, Harrington Trucking and Essex Seafood. And to the entire gang here who put in the effort to keep this car going.”