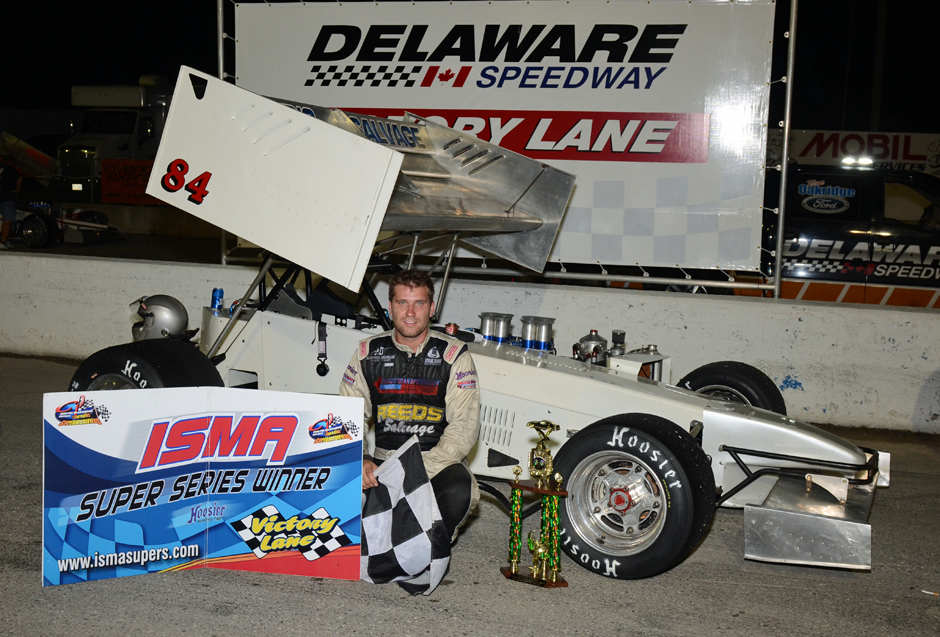 Delaware, Ont.  – Mike Lichty and Dave Shullick Jr. have been locked in a battle for the 2016 ISMA championship for most of the season. Lichty had lost some headway at Lee USA in early August but came back to gain some by winning at the New London Waterford Speedbowl the next day. Shullick, with four feature wins coming into Delaware was ahead by a mere six points. Having won the last two races at the Ontario, Canada oval, he might have been considered the favorite to repeat.

Lichty, with two feature wins to his credit, had not had not fared well in the June Delaware show, finishing sixteenth. The tide turned Friday night for Lichty. Starting seventh in the field, he had some exciting duals with both Mike Ordway Jr. and Timmy Jedrzejek on his way to the front to become the leader of the Harvey Lennox Memorial 75 on lap 54.

Despite some car problems apparent to only him, Lichty built up a huge lead to take the checkered. It was Shullick’s turn for misfortune when something broke on the Bodnar 95 just past the lap 21 mark, and Shoe II headed pitside, done for the night.

Lichty and his crew faced a long work week getting the 84 ready for the event in his native Canada.

“It was a good night. It’s been a long week. We found we had a cam shaft out of it last weekend so at 7 am on Monday morning I was in Detroit meeting Dickie and dropping the motor off and he dropped it off to Dennis Level. I had to thank him for getting it back to us real quick. I just have to thank everybody on the crew for working hard. Dickie and Dave down in Ohio. Dad on our end and everybody in the shop. BJ, Dave and Greg in New York. Reed’s Salvage – a big thanks to them. Craig Reed, my girlfriend Raven and my mother with Patco Transportation. We were good in practice but didn’t have a lot of it as we were fighting motor problems all day. We were over heating. Then our final practice I think we ran quick time. In the heat race we were good. I knew then we had a good car. At the start of the race, I think the rad cap kind of popped up and lost a boatload of water right from the start. At fifteen to go, the motor started breaking up and with five to go we completely lost the rad cap. So she steamed out and we definitely burned out the head gaskets. But I didn’t know how big of a lead we had, so talking to everybody else, we had a big enough lead to back off a little, but I didn’t know it.. I can’t thank everybody enough for working hard. That just shows the amount of work that goes into these cars.

“Obviously it’s good to take the lead back. It’s unfortunate for DJ. It’s always good battling him. I had a fun time racing Timmy J. We were side by side swapping spots through cars working our way up. He’d get me one lap and I’d get him back. It’s fun to race him. He’s a clean driver and I have a boatload of respect for him. He’s one of the best drivers out here.”

Jedrzejek, who sat fourth in the points going into the race, had double the fun battling with two of the top three finishers. He picked up a second place and a first in the Harv Lennox Super Series point fund.

“It was a good run. We’re really pleased with it. Mikey, I think had a better car in traffic and we battled wheel to wheel I don’t know for how many laps. He’d pass me, I’d pass him back. He’d pass me again and I’d pass him in traffic. We had a great time. Later I had the same battle going with the 61. The team just did a great job tonight. We made some adjustments and finally we’ve hit something we can work with in the feature and make it to the end with a decent car. I’m proud of all the guys for the hard work they’ve done. They did a lot work during the week to get the car good and I just have the privilege of driving it. Thanks to Essex Seafood, Harrington Trucking, Enerco-Mr. Heater and Dr Mom Says School is Cool. And also the Harvey Lennox Series which I won first place in. The points fund is something special that all us teams and drivers really appreciate. This week I actually did a little research on Harvey Lennox to figure out who he was and about all the races he won up here in Canada, and down in Michigan. I got a little history lesson. I really enjoyed it. It’s really cool to win that part of the points deal.”

The third podium finisher was Mike Ordway Jr. who also finished third in the June Delaware show. He took home second place in the Lennox point fund and was pleased with another podium in his first year in the Booth 61.

“We had a good car, said the Windham, Maine driver. “There were things we should have adjusted on a little bit more. But once again I have Clyde and Susan and all the guys to thanks. We’ve come to the race track every week with the top three fastest cars and we continued that this weekend. We tried some new stuff. Learned a bunch and we’ll head to Oswego. Timmy and I had a lot of fun out there. We finished second and third here in the spring and we had about the same type of battle as we had tonight. We were just joking about it. We’re going back and forth, back and forth. Our cars seem to like racing against each other. I don’t mind racing against Timmy. Everything was good.”

Danny Shirey, who has been knocking on the door of a feature win in the Stout 49, took off from the pole at the drop of the green in the feature and looked to be ready to claim that win. Tucked behind him was Moe Lilje in the Jimmy Bodnar 76, two-time Delaware winner Ben Seitz, Shirey’s teammate Trent Stephens and Jedrzejek for a good number of laps.

Moving through the pack as the race moved into the twenty-mark, was Lichty, who began the aforementioned side by side, spot swapping with Jedrzejek for a dozen laps or so before yellow fell for Stephens who had his steering break. Dave McKnight and Dan Bowes pitted under the caution and returned.

Back underway, Shirey took off and put a couple car lengths between his 49 and Lilje, Seitz and soon Lichty who finally got by Jedrzejek on lap 27.

Mike McVetta, who certainly has had an up and down year, exited the race on lap 32 when the flag flew for the limping 22 which was pushed to the pits. He indicated that the motor had just quit on his car.

The restart of his yellow saw Shirey, Lilje and Seitz still top three with the Lichty-Jedrzejek dueling back underway, as Ordway Jr. now was about to join the fray with Tim Ice behind the 61.

Red flew on lap 40 when Ice’s 65 came around suddenly, nosing into the front stretch wall under power and then ending up in turn one. Ice was tended to in the ambulance, sore but okay. In an interview later he indicated something had broke on the 65.

After a lengthy delay, the race was back underway but Shirey now soon had Lichty right on his bumper after the 84 had gotten by Lilje. The 49 and 84 distanced themselves out front from Lilje, Jedrzejek, Ordway Jr. and Mark Sammut.

There was no further slowdowns as Shirey tried in vain to keep his lead, but on lap 53, Lichty who had tried the high and low sides of the 49, finally got by for the lead on lap 54. Lichty moved quickly away while Shirey held off the Ordway-Jedrzejek duo, plus Lilje for a dozen laps. Jedrzejek finally got by Shirey on lap 62, as did Ordway soon thereafter. That left Sammut, Shirey, McKnight, Lilje and Seitz, the remaining cars in the lead lap in the attrition-filled event.

Lichty crossed the line alone for his third feature of the season while Jedrzejek and Ordway were still running side by side till the end. Canadians Sammut and McKnight finished up the top five. Ironically, Tim Ice would finish tenth and claim the Lennox Family $182 in honor of Harv’s win total.

Said Sammut later, “It was a tough fourth place. The car pushed all day long. We just couldn’t seem to get a handle on it for whatever reason. That’s beside the point. In the feature we had a pretty good run. We had to come up from 13th. The little bit of attrition helped. At the end the car was going pretty good and we picked up a few spots. To finished fourth at home is pretty good. It’s on to Oswego and hope for the best.”

Veteran Canadian Dave McKnight had also worked hard for his fifth place. “All in all it was a good night. Not the outcome we expected, but broke a caliper in the heat race and that definitely set us back. We struggled to get ready for the feature. The guys worked hard tonight. We made three pit stops and moved from the front to the back to fifth. It was still a strong run. We’ll build on it. We have Classic in a couple weeks, we’ll get the car ready and head up to Oswego.”

Oswego’s SuperNationals on Sept. 3 has been won by both Lichty and Shullick in the past, but Jedrzejek is defending championship of that event and has won two others over the years. The ISMA point’s plot thickens as the group heads into its final three races of the season.