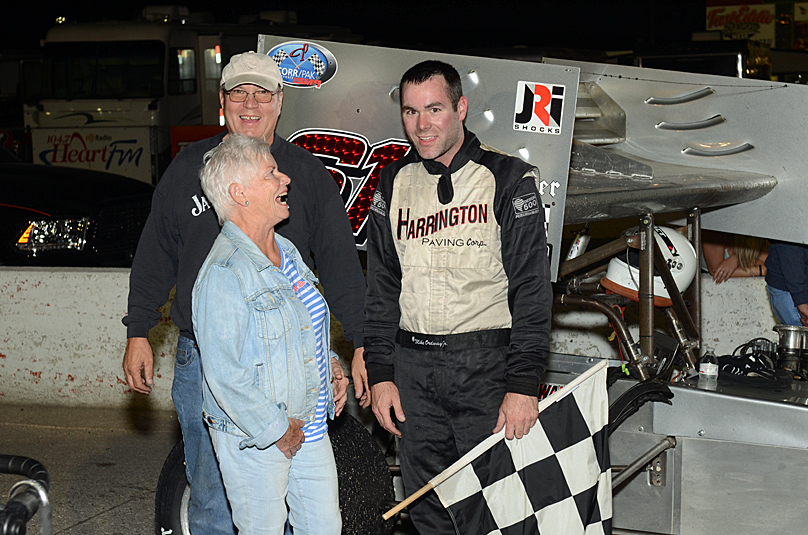 Delaware, Ontario – Mike Ordway Jr. and the Clyde Booth 61 team had had a particularly discouraging couple races, prior to the Ollie Silva Memorial at Lee USA Speedway on August 10, especially at the Sandusky Hy-Miler where Ordway was the defending race champion. But, they would not stay down too long as attested to by the fact that Mike dominated the 75-lapper at Lee taking the lead at the beginning, picking up a Shea Concrete $1000 halfway bonus along his way to a wire to wire victory. His victory at Delaware Speedway on Saturday was not a cookie-cutter of the Lee win, but more of his racing acumen coming to play as he worked his way up from ninth to the front on lap 68 to take this victory.

After stalking a high-flying Mike McVetta for much of the race, Ordway caught him with less that 8 laps to go. The second generation driver had this to say in victory lane

“The car was good. Obviously it was good last week at Lee too. We had the track position there. Tonight we started out in ninth and dropped back to 11th or 12th at the beginning. I hate to go too early in these longer races. But, Jonathon got by me and Lichty was taking off and I saw Danny Bowes moving forward. Kyle was up there and he was fast. So I said to myself, ‘Mike you just can’t save it. You gotta go.’ The longer the runs went, the better the car got. We’ve been struggling a bit this year as I said last week. We had some mechanical and part failures. We have had a struggle with the car in general. When we got to Lee last week Clyde said he had found some stuff and ‘I think I fixed it’. And, for right now, coming in with another win tonight, I’d say he did! Thanks to Clyde and the crew once again and to Delaware and the fans.”

McVetta, who had car problems for much of the day fighting the unknown, took the lead by lap 37 and had to try and hold off the challenges of the 61, lap after lap.

“We tried. It’s always tough with these cars when you get out of dirty air. All of a sudden it all comes to life and then we’re there to lead. And we just came up one spot short. Unfortunately we have some sort of ignition gremlin and it keeps cutting out. We tried to resolve it all day. To come out second is great. We had a hot rod out there tonight. Just can’t go wrong. I had a battle with Mike, but he was better tonight. It was a good night for us. Hats off to the guys for getting me here. Thanks to all the fans for coming out and watching us. We really appreciate you guys… you are the best.”

Dan Bowes, a first time winner at Jukasa Speedway just last month, went into Delaware leading the ISMA points and in a close second place in the Harv Lennox Memorial Bonus Series finale. He was in the thick of the action for much of the race, but couldn’t quite catch up with the Ordway-McVetta show at the front. He took and third and fell five points short of the $3,000 Lennox Memorial top prize, but ended with a $1500 for second.

Said the Epping, NH driver, who was ISMA point leader going into the Canada event. “My crew tells me Edwards ran out of fuel on the last lap and that might have given me top prize in the Harv Memorial bonus, but we’ll see. We are trying to race every race and finish the best that we can and let the points take care of themselves. But a third place finish is good tonight. This was a long, long day. I can’t thank my crew guys enough my dad, Dave Callahan and Brian Allegresso fought gremlins all day up until just going out to set the stagger. We found a flat due to a bad rim. We were able to find the cause and change it over in time but the crew worked their butt off today. I can’t thank them enough. Without them thrashing all day we wouldn’t have had the car we did today. I’ve been successful here in Canada this year. We had our first win at Jukasa and, a third tonight, also finishing second in the Lennox Memorial series. When I get away from the home crowds, I think the pressure is off and I do a lot better. I want to thank the fans for sticking this one out. I know it was a long night.”

Michael Muldoon and Rich Reid, both running quick in the heats, led the way to green with Reid jumping off to the lead but the field had to bunch four laps later when the late-arriving Dave McKnight stopped on the front straight and was pushed to the pits.

A restart of this lap resulted in another yellow when Larry Lehnert spun in four. He was towed to the pits and reported ofn.

Reid was able to pull away from Muldoon on the restart, who now had Mike McVetta on his tail, with Bowes, Edwards, Jon McKennedy, followed by a battle between Mike Lichty and Trent Stephens.

Suddenly on lap 11, the 55 of leader Reid slowed and limped to the pits. His day was done.

Michael Muldoon inherited the lead and he too took off but the field had bunched behind him with McVetta, Bowes, Edwards, Lichty and Ordway the closest challengers.

The race developed a long string of green flag laps with Muldoon finding McVetta and Bowes closing in. Edwards, McKennedy, Ordway and Lichty were next in line with a gap between the 84 and Timmy Jedrzejek, Ben Seitz, Stephens, Mark Sammut, AJ Lesiecki and BJ MacDonald.

By lap 32, Muldoon had pulled slightly ahead of McVetta as the frenetic pace continued with the 22-25-1E-21 cars the challengers now with the 61 of Ordway closing in on their tail.

Unfortunately for Muldoon, as McVetta bore down on the 15, his car slowed a tad, sliding into the inside wall off four. He did not stop and could continue, but the caution had come out so Michael headed to the rear and Mike (McVetta) took the lead.

McVetta was able to take off on the green but behind him Ordway had polished off Bowes for second place and now was ready to take on the 22.

A quick spin by AJ Lesiecki brought out the yellow on lap 39, as he headed to the pits, and so were Muldoon and Jedrzejek who both pulled in for adjustments and returned at the tail of the field.

McVetta was able to hold off Ordway on this restart and the race was on. The 61 would close, then drop back a little. McVetta would gain some ground and then the scenario repeated. One could almost see the strategy emerging from both drivers.

With 25 to go, McVetta was still rocketing out front but had not shaken his prime challenger. Bowes maintained is third place not out of contention by any means.

With 10 to go it was still 22-61-25 each trying every way around the guy in front as they approached a lap car. As the leader got around, Bowes was able to close up on the bumper of the 61 as the crowd watched the duel with anticipation.

On lap 67, McVetta came off four and suddenly Ordway made his move and dove under the 22 just past the start-finish line, taking the lead, and heading for his second in a row and his fifth career ISMA win.

Ironically as the 61 rode toward the checkers, and as McVetta and Bowes were settled in in second and third, when suddenly Edwards slowed out of fourth place, out of fuel near the line. Jon McKennedy took his place crossing in fourth with Lichty now in fifth. Edwards, in a battle with Bowes for first in the ISMA points and also for the top prize in the Lennox points, was able to slide his 1E over the line for sixth.

McKennedy, with a long ride home, was packed and off to Chelmsford, Mass right after the race and not available for a quick interview.

Lichty, with a much shorter ride, ended fifth and he commented, “The car is in one piece and we can move on to Oswego where I may be competing in both the ISMA race and in the Classic. I especially want to thank everyone involved in the Tammy Ten bonus series – Corr/Pak, Arctic Snow Plow and Equipment, Patco, Murray’s Transmission. Special thanks also to Eddie Shea and to the fans here tonight.”