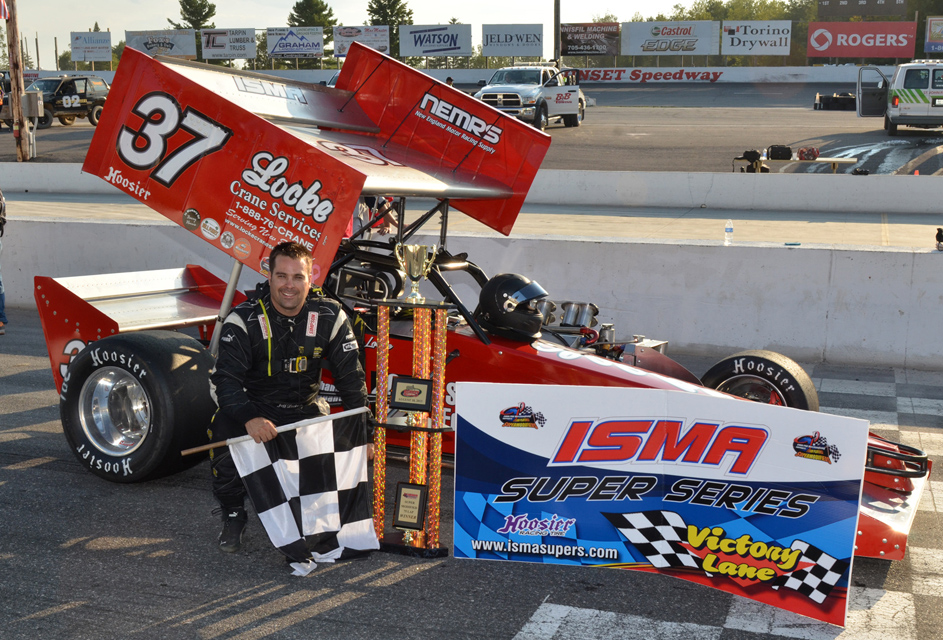 Innisfil, Ont. – On August 7, 2009, ISMA rookie Jeff Locke pulled off a surprise career first win in his initial visit to Delaware Speedway in Canada. Four years later, Jeff picked up his second career ISMA win in the inaugural race at Sunset Speedway near Barrie, Ontario. This time he was no rookie and it showed as he took the lead on the first lap of the 75-lapper and stayed out front for the entire distance. One thing that disappointed Jeff about this achievement was the one person absent from his career first, his dad Ken, was also absent from his career second. Jeff commented on this in the post-race interview before the huge crowd, which had, came for the race.

“This kills me. My dad isn’t here. This is my second win and the second time my father hasn’t been here. It’s killing me. Brian Allegresso, Doc Hathaway, Jerry Martel, made this long trip out here for me and to work on this racecar. I am proud and privileged to drive this car. My father, Ken, gives us everything we need. Unfortunately, he couldn’t be here but I know he’s excited back home. Track position was key and we kept it up there. We kept the wheels underneath it and the tires on it and here we are. I burned it off a little too early though and that last caution with eight to go really helped me. It cooled down the tires quite a bit. And then the last eight laps with the tires cooled down, we were able to stay ahead of Alison, and by the way, congratulations to her. That’s awesome. I was proud of that team and for Ryan Coniam. That’s great for him too.

“This is a great organization and this is a great race track, I really appreciate them for letting us come here and race and the people who came to watch. I also would like to thank the sponsors, Glenn Shanks Oil, Shawmut Equipment, Locke Crane Service and NEMRS (New England Motor Racing Supply).”

Locke’s main competitor throughout the event was rookie Alison Cumens who scored her second podium finish in this her first full year of ISMA competition. When asked if she thought she had a chance to get a win when the yellow fell late in the event, she said, “Our car was super tight right in the center of the corner and loose coming off. Maybe I could have caught Jeff on that last restart, but it’s a big maybe. If anything I would have really had to drive it in hard and get underneath him and kind of shoo him out of the way. I didn’t really get that chance. Maybe next time. Thanks to the people who got me here – Mom, Dad, Lou, Janet, a bunch of random strangers who helped us throughout the weekend, and everyone at home. “

Ryan Coniam came home third in front of many of his “hometown” fans. He was closest to picking up a $500 bonus put up by the Snowball Gang to a Canadian who could win the race. He described his run this way, “We were really loose right from the drop of the green. I had to get all I could there right at the start because I knew our stuff was going to be used up by the time the race got down to 15 or so to go. That’s the way it was. I didn’t really drive a smart race. I think I could have managed my stuff a little better. We were probably a third place car and that’s where we wound up. I think everyone going into this new track knew that tire management was going to be an issue. And certainly the two cars ahead of me did a way better job than I did. Coming into this kind of racetrack with little grip, we knew had too much horsepower and tire management is really an important part of it. Your feet are what are responsible for the day. Unfortunately we just didn’t have enough

“Alison drove a helluva race and Jeff had us covered. So that’s all there was to it. We’ll go back and be ready for Oswego. I want to thank all the Patco guys and the Reed guys. They make sure this car is going for me. Without them I couldn’t do it for sure.”

A 15-car field depleted by mechanical issues which sent Timmy Jedrzejek, Rod Sauder and AJ Lesiecki home from Delaware and a breakdown of the Lane 97 the night before at Sunset during an exhibition run, took the green led by Locke and Cumens. Jeff grabbed the initial lap and Alison stayed right with him for the entire distance to the checkered.

Only three laps in and another heartbreaker hit Mike Lichty, trying valiantly to defend his 2012 ISMA title. A brush with his teammate Coniam caused the demise of the 84 and an early race exit.

Back underway Locke and Cumens stayed together for a brief period until Locke pulled away. Coniam, Sammut, Cicconi and Johnny Benson were trailing slightly behind her.

The race went green for a long spell as the winged supers flew around the banked third mile where Cicconi had set a new track record of 12.09 in his heat race.

Yellow slowed things down on lap 13 when Ryan Litt spun in turn two and his race ended shortly thereafter.

Locke put the pedal down on the green pulling away from Cumens who had her own war to wage with Coniam, Cicconi, Jon McKennedy, Sammut and Friday night Delaware winner Ben Seitz who raced nose to tail just ahead of Mark Sammut.

By the lap 25 mark, Locke had put down his first lap car supplying a rather unneeded cushion between his 37 and the 39 of Cumens who was still holding off a strong pack behind her.

With no slowdowns in sight, and another long green run Locke was cruising alone out front as the laps ticked off rapidly. At the lap 50 mark the 37 was well out front but Alison, having cleared lap car of Bowes, began to methodically reel in Locke pulling Coniam, Cicconi, McKennedy and Seitz with her.

With 15 to go, Jeff was coming up on Lilje, Summers and Benson, who weren’t going to be easy to pass by. This gave Cumens an even better chance to close up the gap between her and Locke.

Unfortunately, the last yellow came on lap 67 when Lou Cicconi broke in turn two. A twisted torque arm was the culprit and the current ISMA point leader was on the hook as the track crew laid down some speedy dry.

As Alison focused on Locke, McKennedy and Seitz tried to both get by Coniam for that podium spot. Several circuits saw the three running almost side-by-side as they vied for position.

As the five to go signal was given, it was Locke, Cumens and Coniam with Seitz coming away with the fourth spot and McKennedy settling for fifth. Jonathan mounted a charge on Seitz a couple more times, but time ran out as Locke crossed under the double checkers out front and alone. Cumens came in in second for her best finish to date as Coniam took third. Seitz and McKennedy finished up the top five.

Seitz had a quick comment as the teams all scurried to load up for the long ride home on a Sunday night. “The car was really good today. There was a long green run. I started toward the back in 11th and had to work my way up. It was a good run. Congratulations to Jeff and Alison. They both did a real nice job. I’m happy with another top five and we’ll roll on to Oswego.”

McKennedy, coming off a win at Waterford Speedbowl on August 10, said of his fifth place, “I was disappointed with the run today. All day we were the fastest car but in the race we were way too loose. We didn’t adjust the car enough. I set the wing back an inch or so and cut back on the stagger. But I knew about two laps in that I was in trouble because I was turning right more than left. So it made for a long 75 laps. What are you going to do? We passed a bunch of cars but once we got to fourth or fifth that’s kind of all there was. I couldn’t move any farther forward. In the future we will have to make a lot more adjustments.