MCKENNEDY WINS THIRD ISMA MAIN OF 2014, THIS TIME AT SUNSET 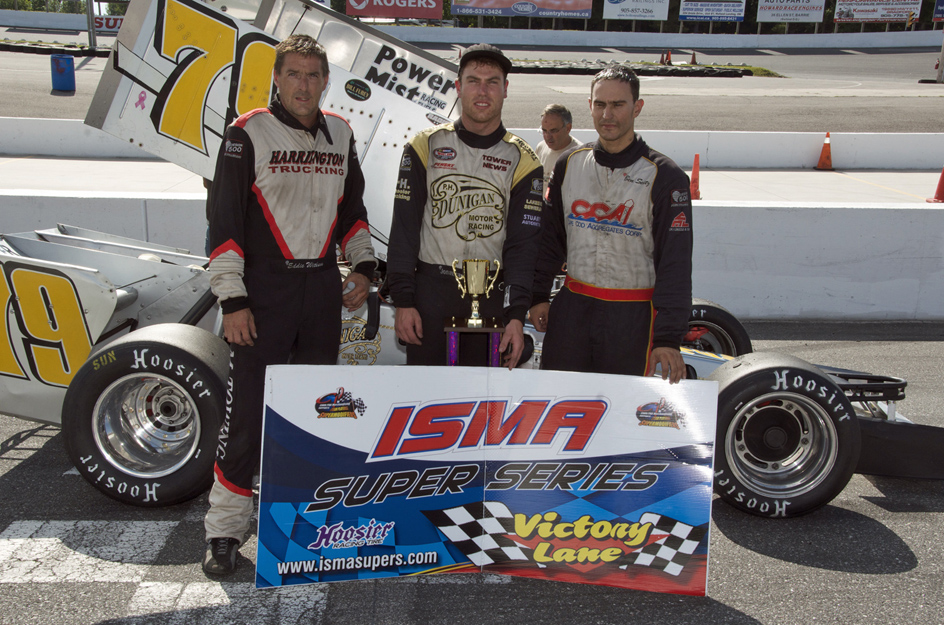 INNISFIL, ONTARIO, Canada – Jon McKennedy relied on taking good notes from his visit at Sunset Speedway in 2013 to pick up his third ISMA Supermodified Series win Sunday afternoon at the Innisfil, Ontario oval.

McKennedy overcame suspension issues in Friday night’s ISMA event at Delaware Speedway in Delaware, Ontario and rain storms that pushed Saturday’s race at Sunset to Sunday in order to score the victory.

“The car was working really good, and it made it really easy to pass,” said McKennedy, who started ninth and took the lead from Dan Bowes shortly after the halfway point of the 75-lap race.  “Last year we were good here, but got too loose.  We kept good notes and it was fast right off the trailer.”

McKennedy, of Chelmsford, Massachusetts, would hold off Ben Seitz by 0.651 seconds to get the win.  Seitz followed McKennedy through the field, as he started 10th and finished second.

Ed Witkum made a late charge up to third, but ran out of laps to challenge for the win.  Mike Lichty and Rob Summers rounded out the top five.

The race was scheduled for Saturday night, but Mother Nature postponed it until Sunday afternoon.  This worked in McKennedy’s favor as his notes from last year were from a Sunday afternoon show with about the same weather conditions.

After Sunday’s victory, McKennedy was left thankful for the hard work that his team put in throughout the long weekend in Canada.

“I have some good guys helping me and I really want to thank them for their help this weekend,” McKennedy said.  “They fixed our suspension issue on Friday and stayed with us to help on Sunday afternoon.  They are really dedicated.  I also have to thank my car owner Paul Dunnigan for letting drive the car.”

McKennedy will now focus on the final three events of the 2014 ISMA season.

“We have had some bad luck at Oswego Speedway with mechanical issues in the past and we are ready to get our monkey off of our back,” McKennedy said.  “I am looking forward to the Star Classic at Star Speedway, because we won it last year.  I am also eager to race at Thompson International Speedway in October.”

The ISMA Super Modifieds will be back in action on Saturday, August 30th at Oswego Speedway in Oswego, New York for the ISMA Super Nationals.