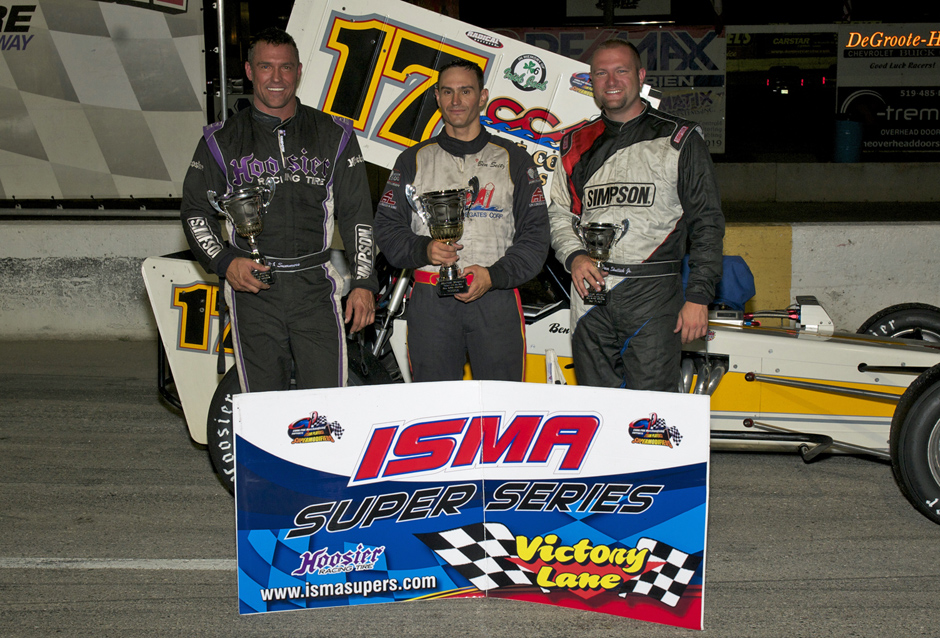 DELAWARE, ONT, CANADA – It is a guarantee that Ben Seitz had this date circled on his calendar when the 2014 ISMA Super Modified Series schedule was announced. After winning at Delaware Speedway in Delaware, Ontario in 2013, he was eager to get back and repeat. He did just that tonight.

Seitz took the lead from Jeff Locke on lap 32 and led all the way to the checkered flag to win the 75-lap feature at the half-mile oval.

“Two years in a row,” Seitz said in victory lane. “The car was the same as it was last year. The car wasn’t that fast in practice and it wasn’t fast in the heat race. But we thought we had a good feature package. We stuck with it and used our notes from last year, and it worked.

“Jeff (Locke) was getting loose and we were able to get under him. The rest was history.”

Ryan Coniam took the lead at the green flag but Locke got by him on lap 5. Locke held on to the top spot until Seitz, who started third, got by him and didn’t look back.

Rob Summers started fourth and came through with a second place finish.

“At one point I thought I was going to have something for him and I started getting loose, then he took off,” Summers said. “We got another second place. We have had a consistent car every week and I can’t thank my crew enough.”

Dave Shullick Jr. was fast all day in practice and won his heat race. He started tenth, but the best he could race up to was a third place finish.

“We were good in three and four and just didn’t have enough to get by Summers off off of turn two,” Shullick said after the race. “He would pull me off of two and I would catch him in three. It is hard to pass here. You have to have a really good car to make those passes. I was really good off of turn four and just couldn’t get enough in there to make the move.”

The ISMA Super Modifieds will continue their Canadian tour on Sunday, August 17 when they travel to Sunset Speedway in Innisfil, Ontario, Canada.