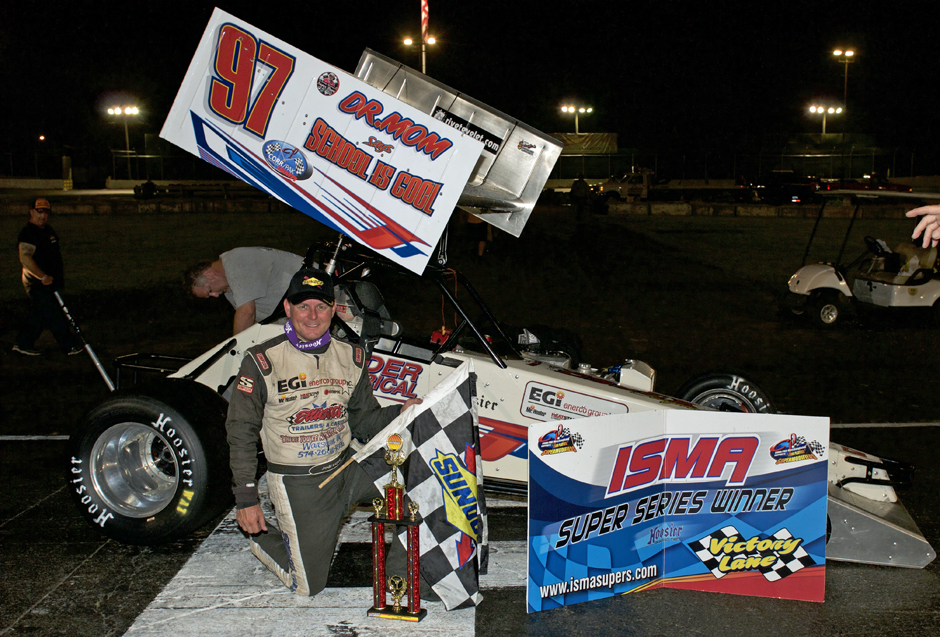 Waterford, CT – After an unusually high rate of attrition at Lee USA Speedway on Friday night, the ISMA competitors trekked south to Waterford were down in numbers, but a combination of crashes, curfews and a late night start to the Saturday night feature caused more havoc.

The ISMA 75 started last on the agenda and fearfully close to the track’s midnight curfew and some spotty rain in the area. When all was said and down, the race was shortened to 50 laps, then checkered after 39 complete when both rain and the curfew fell.

Ohio’s Timmy Jedrzejek, starting third in the fourteen car field, had escaped a major pileup in front of him before the first lap was completed. Suffering damage were the cars of Alison Cumens, Chris Perley and Lee USA winner on Friday, Michael Muldoon, who was the only one of the trio to be able to continue.

Jedrzejek then inherited the lead on the complete restart, survived a lap 7 yellow for another devastating crash involving Mike Ordway Jr. and Dan Bowes, and a challenge by Trent Stephens just prior to the lap 39 race end. Timmy was obviously happy to get his first win of the season in the new Lane Racing 97.

He indicated after the race, “It was a good night obviously for the 97. We needed a good run here. It seems when I come to these New England track I don’t do as well. It doesn’t fit me or something. Obviously starting position helped when the front row got taken out on the initial start. But, I guess we had a really good day. Everything went smooth in practice, in qualifying and the heat race. We just kept making little adjustments. I have to hand it to Rich, Howie, Tony and the entire crew for giving me the opportunity to drive these two cars now. It takes a lot of maintenance to get two cars ready. We didn’t have such a good night last night, but tonight we turned the corner a little bit. It was a good points night. We did well in the heat race and in the feature. Thanks to Doctor Mom Says School is Cool, Essex Seafood, Enerco Group, Reader Electric, Harrington Trucking and everybody else who helps support this deal. It will be a little more pleasant ride home tomorrow all the way back to Cleveland.”

After running pretty much alone up front, Jedrzejek was pressured by the 19 of Trent Stephens toward race end which none of the drivers knew was coming up sooner than expected. Tim realized Trent was there but had no idea the race would end within ten laps of the challenge.

“Did I hear Trent coming? I did. I got out there in the lead and when you’re out there you don’t know who is behind you and how close they are. You don’t know if you’re running too hard or not hard enough. I got hung up by a lap car a little bit. I didn’t hear anybody at that point so I kept cruising after that. But, when I heard him and saw a wheel, I knew I had to dig a little deeper and start to run a little harder. Maybe we pulled a little away from him, maybe we didn’t. I don’t really know for sure. I had a little bit left in the tank at that point. Then I got a little loose down there when the rain started and then I heard yellow and it was all over.”

Stephens was more than pleased with his two-day performances at the two New England tracks. Said the Tallmadge, OH driver of his second straight podium finish, “We’re finally getting ahold of this New England stuff. Third last night, second tonight is really good for our team. We bust our butts to get here. We have a small team especially at these New England shows. It feels good to start running good. I think we had the fastest car on the track tonight. Unfortunately it’s tough to pass here. I got to Timmy’s door but unfortunately he was good enough off so I couldn’t pull off the pass. I think before the rain I started catching him. I might have had another shot but oh well, we’ll take a third and a second this weekend and then go to Delaware.”

Third place finisher Jon McKennedy was not a happy camper so to speak when the race was called at the end of 39 laps due to the flag for the bit of rain that activated the midnight curfew. Said the disgruntled driver from his pit area, “The whole day was an absolute shit show. We set up for 75 laps not 33. Then it sprinkled for 10 seconds and they called the race. I guess now it wasn’t the rain so much, but the curfew. Anyway, the whole deal was a bad show. We should have raced three hours ago. We had a 75 lap car not a 30 lap car. I’m disappointed. It’s an embarrassment to the whole club. Nine cars finished. It’s an absolute disgrace. We’ve got to start making some changes. Maybe double file restarts and let them race!”

As aforementioned the race carnage from the night before at Lee which had sent two drivers to area hospitals for treatment, had pared the field arriving in Waterford, CT the next day down to fourteen cars. With seven divisions of cars competing at the Wings and Wheels event, it would be a very long day and night. Several medical emergencies unrelated to on-track racing, also added to the delays.

The ISMA feature was last up on the grid and before the race even started, the midnight curfew loomed. Unfortunately, the front row cars of Mark Sammut and Alison Cumens made contact coming into turn one after the initial green was dropped. Cumens hit hard into the wall while Chris Perley and Michael Muldoon were collected behind. All three cars were hooked and two of the action, with Muldoon able to make repairs and return. Red had been called and a lengthy period ensued to get the cars back to the pit area. Thankfully no injuries were reported this time.

On the complete restart, Timmy J found himself on the pole and he used the spot to take off from Jon McKennedy, Trent Stephens, Mike McVetta, and Dan Bowes.

Jedrzejek pulled slightly away as the laps ticked off competing with the curfew clock. But on lap 7, things were halted again as Mikey Ordway crashed hard into the third turn wall after connecting with Dan Bowes who had suffered a flat tire. Ordway, a little bruised described the incident later. “I saw the 25 get a little loose there the lap before and he got up into the fence. I thought I’d take advantage of it and I knew he was probably going to lift early going into one and just make sure his car was all right. I had it planned that I was just going to roll around him. While he was trying to get back into rhythm I was going to roll the top and get around. I got outside of him on entry but as soon as I got back on the throttle his right front went down and I just hopped a wheel.”

Both cars received extensive damage and the field was now five cars down as Jedrzejek continued his lead at the restart of the lap. It was determined at this juncture by track officials that the race be reduced to 50 laps (what had been the number run in the past by ISMA) thus giving the remaining field a chance to beat the curfew and the rain which was also about to play a role.

The 97 began to run comfortably out front as Trent Stephens kept the leader in sight. McKennedy, McVetta, Mike Lichty, Rob Summers, Sammut, Muldoon, Moe Lilje and Justin Belfiore were behind.

The lap 25 mark was passed without incident, making the race official, but the action continued as Stephens began to reel in the leader who had slowed somewhat to get around the 49 of Lilje at the tail.

On lap 35, Stephens was up to the 97 as the duo began what might have been an epic battle but four laps later, the flagman had to wave the yellow as rain drops fell hard enough to be dangerous to the drivers on the track. The curfew rule mandates that any caution near midnight will bring the race to an end. And so, although the spotty rain stopped not long afterwards, the damage was done and the race was over with Jedrzejek, Stephens and McKennedy, McVetta and Lichty the top five.

McVetta was not displeased with his finish after a bad Sandusky weekend a week prior. Said the “Rocket-man” back in the pits, “Our car wasn’t really too bad. We were set up for the extra laps so the rain shortening it didn’t help us at all. I think we would have had something at the end. But, hats off to Timmy for getting the win. We had a solid weekend with a second and a fourth so we can’t complain. We’ll take the momentum and go on to Delaware and the $10,000 to win race..”