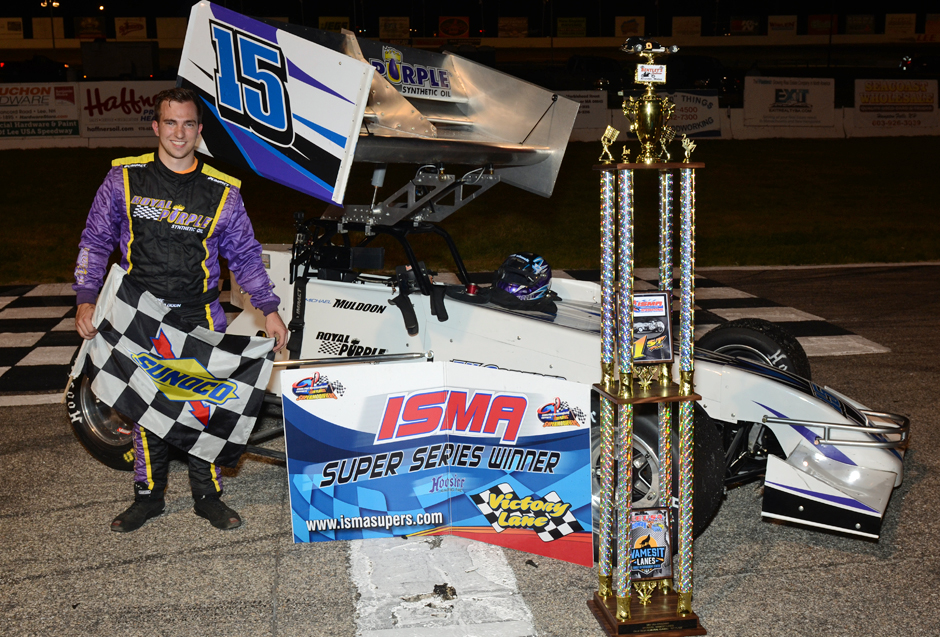 Lee, NH – Baldwinsville, NY’s Michael Muldoon, with only five ISMA events under his belt viewed Lee USA Speedway in New Hampshire for the first time on Friday night. He quickly adapted to the new-to-him venue and came home with a very impressive win in the Ollie Silva Memorial 75. His first career winged win took a combination of a good starting spot and a little luck when race leader Ben Seitz stopped off turn four on lap 63, while due to motor issues.

Muldoon had led the 75-lapper up until lap 33, when passed by Seitz in the Locke 37. Muldoon stayed in second while Seitz was able to build a comfortable lead, hauling in the $1000 Shea Concrete lap 37 bonus, until the car’s demise. Muldoon retook the top spot and led the remaining 11 laps, pressured by Ohio’s Mike McVetta, for the victory, his first career ISMA win.

The third generation driver said after his win, “After not having been here before I guess tonight was kind of dumb luck. Starting up front definitely helped. I think I’ve only run five or six races now. We’re chipping away at it… getting better and better every race. Today the front starting spot was definitely a benefit. Our car was pretty solid. It started to go away at the end. But we had just enough to hang on. I heard McVetta coming up. I actually made a tiny bit of contact with him. I heard him but I couldn’t see him outside of me. I just barely tagged him. But I knew he was there and I drove my ass off at the end. I’d like to thank all my sponsors, Royal Purple, FX Caprara, All Car Care and BBD Powder Coaters. And obviously my crew, dad and Eddie, the one man car crew. I’ve never been to Waterford either so we’ll see what happens.”

Mike McVetta tried valiantly to take away the lead from Muldoon, but came up short. After some bad luck at Sandusky at the end of July, he was not disappointed with the attempts. “We certainly tried. I was able to get beside him once but the hole just closed up. It was no doubt a good run for us after two dnfs at Sandusky. To come back and run this strong is great for us. It’s such great team work that we have to get these finishes. Thanks to all our sponsors, Euphoria Vapors, Perfection Fabricators, Fallsway Equipment, Cerni Truck, and Fourth Turn Crazies. Last year we won at Waterford so I’m looking forward to tomorrow as well.”

Fellow Ohioan, Trent Stephens also was satisfied with a podium finish. “Every year we come here we get a little bit better. I think I’ve had a tenth and last year fifth and this year third. I think we’re making progress. But this place is real hard to get a hold of. We were pretty good during the day. I thought we had something for the feature but we just missed it. We didn’t tighten the car up enough. I had no traction what so ever so I was just a passenger for the feature. It kind of stinks because for not being able to do anything, I was still right there. I have to thank the guys. This is a long haul for us and we definitely have a fast race car. We just have to hit the set-up one of these times.”

Eighteen cars were lined up for the start of the Ollie Silva Memorial, shy Jamie Timmons’ 27 which had met with a bone-jarring crash in his heat. Timmons was taken to an area hospital and treated for his injuries.

The first lap of the feature did not bode well for Dave Danzer and Sandusky Fast Friday winner Moe Lilje when both cars ended up in the wall in between turns one and two. Dave Duggan’s 51 was also involved but he was able to continue. Danzer was also taken to an area hospital for a check-over. Both cars were out for the night.

McVetta moved past Cumens on lap eleven as the race sorted out behind Muldoon.

Yellow flew on lap 22 when the 39 of Cumens came around in turn four. She was able to restart and the chase resumed with the field bunched and McVetta mounting a challenge to the Muldoon 15. Seitz was running third with Stephens, Perley, Dan Bowes, Ordway Jr, Tim Jedrzejek and Mike Lichty in the hunt.

Unfortunately for Cumens, a second yellow flew for her 39 on lap 26, with her finally parking the car for the night in the infield.

This restart gave McVetta and Seitz another opportunity to close on Muldoon. Seitz was able to get by the 22 one lap later and five laps later he shot by Muldoon off turn one to take the lead.

Seitz was able to pick up an extra $1000 on lap 37 for his efforts. Seitz then left Muldoon, McVetta, Stephens, Perley, Ordway and Bowes behind, with Ordway and Bowes swapping positions in their own little race.

Seitz was on cruise for the next 20-plus laps and looked to be headed for his second victory of the season when his 37 came off turn four, slowed and stopped, bringing out the yellow and a heartbreaking end to his race.

Muldoon now was able to pick up where he left off before Seitz took over. Mike took off quickly to put a few car lengths between him and McVetta. Stephens led Perley while Ordway Jr and Bowes diced back and forth. Jon McKennedy, Mike Lichty, Mark Sammut, Timmy Jedrzejek and Dave Duggan followed as the only cars left after a couple of carnage-filled cautions.

At the checkers it was Muldoon, McVetta, Stephens, Perley and Bowes who came across in the top five.

Bowes commented later on his finish. “We had a pretty good car. I was kind of riding around the whole race just trying to save my stuff for the end. I think the yellows might have hurt me a little bit heat cycling the tires. I had a really good battle there with Mikey Ordway Jr. That was a lot of fun going back and forth with him. We got close but never touched. I’m happy to come home fifth. We were a little loose toward the end trying to save tires. We were really fast in the outside groove early on and guys started moving up toward the end and kind of took my lane away. All in all a good run and everything is in one piece for tomorrow.”

Perley, a five-time winner at the Lee third-mile oval, said of his fourth place, finish, “The car was a rocket. I’m really happy to finish fourth. It’s a testament to all the cars we passed. Actually it was kind of a freight-train race out there. I appreciate my sponsors and tonight’s race sponsors. I appreciate all the fans for coming here to watch. We obviously still have work to do with the car. I’m not going to say anything about the tires. It’s on to the next race.”