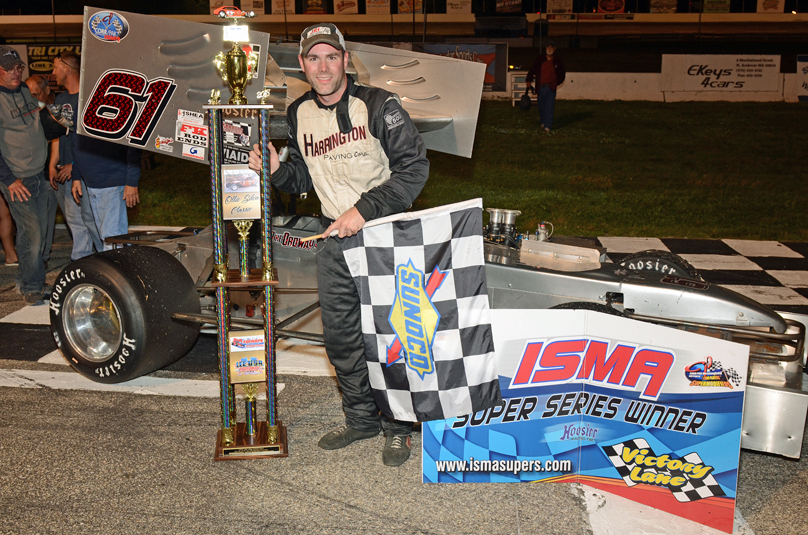 Lee, NH – Mike Ordway Jr. took the Clyde Booth 61 out to the lead of the Ollie Silva Memorial at Lee USA Speedway Friday night and was really never at risk of losing it. Ordway led every lap, picked up $1000 halfway leader bonus sponsored by E.F. Shea concrete and flew to the finish after that. The large crowd on hand voiced their approval of the win by the “hometown” boy who ran a great race to claim the prize. When the announcer chided Mike a little about being a “Mainer”, Ordway’s response was “It doesn’t matter where I moved to, I’ll always be from Fremont!.”

It was Mike’s first Ollie Silva win and third overall in ISMA. His dad Mike Sr., who owns five ISMA wins at the Lee three-eighths, was all smiles when his son pulled into victory lane. The win was kind of a redemption after car problems sent the 61 team home two weeks ago where Ordway Jr. was defending champion.

“We needed this one. It’s been a tough year. We had a couple off weeks. But. to come back home to Lee and win was great. We took advantage of a good starting spot, we just did what we could. I wanted to put a few cars down early to kind of get a buffer. We know this place is big on saving tires. Clyde and the guys gave me a great car. Like I said we’ve had some mechanical issues and some part failures, but we had to just keep on digging. I told them a long time ago not to give up on Clyde Booth. I knew it would come around. For the most part the lap cars were pretty good near the end. It’s just the nature of the beast here. They were worn out, my car was starting to wear out. I was just trying to take my time getting to them and make the right move on them. I didn’t want to take any chances. But you know you don’t want to give up too much track position either. We’ll take it. Thanks to Marollo Racing Engines, JRI Shocks, Clyde and Susan Booth, My dad, Eddie Page, Joe, Larry – just everybody who helps out. These guys just keep coming back. This is my first Ollie Silva win. With all the people who have raced for Clyde it’s pretty cool to win in his car.”

Mark Sammut, whose crew had been struggling with tire setup all afternoon, despite have a second place in his heat, was pleased with the outcome of the Silva 75.

Said Mark of his podium finish: “We were really good at the start and we got a couple spots there and and after starting sixth, we got up to second in a reasonable amount of time. But, as the race went on, the tires starting going away. Between laps 50 and 60 I think I might have been catching him a little bit but once we went over lap 60, my tires were pretty much done. He had a lot more left than we did. It was a good run considering. Lap cars gave us a little trouble there near the end but that puts on a show for the fans. It all worked out and it’s nice to have a good second place run.”

Dan Bowes, who got his first ISMA win at Jukasa in July, was happy with a third after starting back in the field. “ It was a good run tonight, to come from thirteenth to third with only one caution. We had a pretty decent pace. I’m really happy with that. We missed the setup a little. We were a tiny big more conservative than we should have been as far as tightening up the car for the race. I’m still happy to come home third. We had a good points night. The race was fun. I came right up through, inside and outside. The car could pretty much go anywhere. I’m really happy with third, and I almost got second there. If I had another lap or two I would have had it, I’m pretty sure. But I’ll take the third, I just ran out of time.”

Dave Duggan and Ordway Jr. led the way in the feature, paced for a lap by racing legend Bentley Warren who was driving the race’s Grand Marshal Russ Conway around the track. Conway had been honored for his contribution to the area’s racing and racing in general over many years as a news reporter, writer and promoter.

Ordway grabbed the lead from the green and never looked back. Chasing him for a few laps were Michael Muldoon, who won the event in 2017 on his first-ever visit at the New Hampshire oval, Duggan, then Sammut, and Ohioans Trent Stephens and Kyle Edwards.

Fourteen laps later, Ordway was closing on the tail of the field which included sixteen-year old Fulton, NY phenom Tyler Thompson, also in his first visit to Lee.

The one and only yellow fell on lap 23 when Dan Lane, driving the Lane 9, came around off turn four. He was able to be pushed away and in the interim Rob Summers in the Lichty 74 and Jamie Timmons pitted. Although both returned, Summers had to call it a night a couple laps later.

Ordway was off like a shot on the restart with Sammut, Edwards, Stephens trying to keep up. Behind them Dan Bowes was working on Muldoon and a little behind that duo, Chris Perley and Ben Seitz were battling.

As Ordway lengthen his lead out front, he was able to put a couple more cars down adding to his cushion. In the meantime Mike Lichty was struggling with the 84 and finally pitted on lap 40. The team was not sure later when asked, what might have gone wrong with either Lichty-Reed car.

With the Booth 61 just cruising out front, Sammut tried to catch up, as Timmy Jedrzejek fell victim to the Ordway onslaught as did Trent Stephens who finally pitted on lap 56 obviously fighting an ill-handling car.

With 15 to go, Sammut still had Ordway in sight as Edwards ran third, Bowes fourth, and Jon McKennedy in fifth. Chris Perley, fighting an errant wing, held on to sixth with Seitz and Oswego ace Otto Sitterly behind, the final cars on the lead lap as the checkered approached.

In the waning laps, the race was Ordway’s to loose as a battle mounted between Sammut and Bowes near race end. They remained in that order at the finish with Edwards and McKennedy rounding out the top five.

Said Edwards, a newcomer to Lee and tied with Bowes as leaders of the current ISMA points, after his run, “We did well for our first time here. Something in the ignition started going haywire – I don’t know if we have a bad box or the magneto is going. I don’t know what it is but that happened about half way through and I just got too loose at the end. All in all a fourth place isn’t bad I would have liked to been on the podium but the car is one piece and we’ll go on to Waterford and hope it doesn’t rain there tomorrow.”

McKennedy, who was back in action after two recent stints in his modified rides, was not unhappy with a fifth. “It was a decent run. We started back in 15th and got up to fifth. We passed a lot of cars. We were just too tight. The stagger shrunk way up on us. We were about a half inch shorter than what we wanted but it’s no one’s fault. The tires kind of took off on us. We were good, but a little too tight. It would have been nice to have a yellow there at the end. I think Danny and I probably had the two best cars in the last half of the race. The field got really strung out and it was tough. Unfortunately we never got that yellow. Overall it was a decent day. Thanks to all the guys for helping. They all worked hard. It’s off to the next race.”