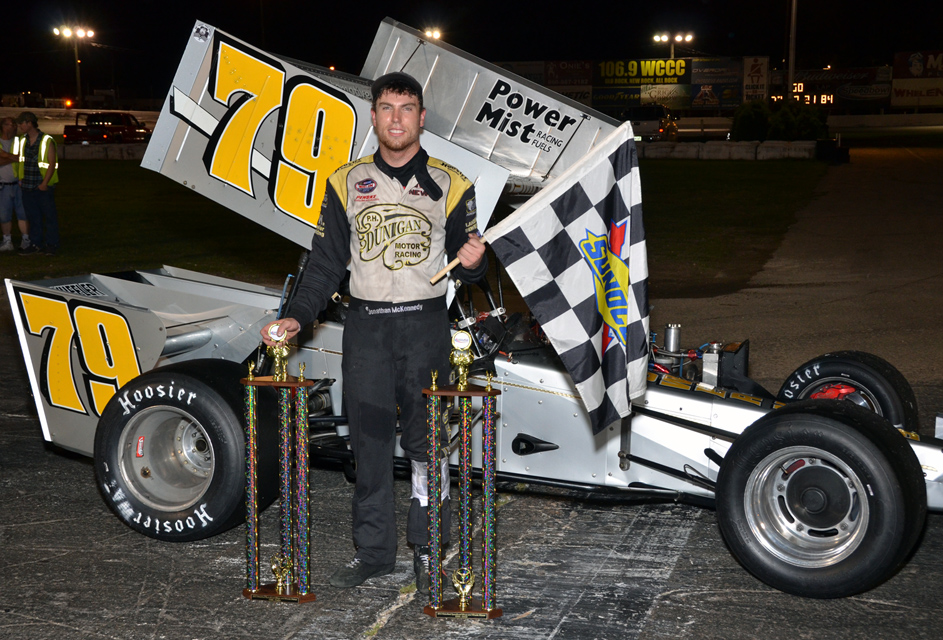 Waterford, CT – Jon McKennedy has frequently been listed as one of the fastest winged supermodifieds on the ISMA trail this season, but up until Saturday night he had not been able to notch a feature win. At Waterford Speedbowl, where he has been no stranger to victory lane in a modified, McKennedy etched his name in the record books with his first ISMA win there, and his ISMA career-second. The last few ISMA events had not been especially kind to the Chelmsford, Mass. driver, giving him the pole spot at Waterford after handicapping. His starting spot also helped him avoid a massive first turn crash which occurred behind him and after the cleanup, McKennedy took off in the lead never to be headed despite several other slowdowns during the 50-lap event.

It was a poignant moment for the 79 team when the Paul Dunigan Jr.-owned car pulled into victory lane. The Dunigan name had been an integral part of ISMA history until the passing of Paul Sr. in 2004 and the resurrection of his legacy was welcomed when Jon was chosen to run the Paul Jr. supermodified on a full-time basis this year.

Said Jon in victory lane, “The crew worked really hard for this today. It’s been a tough year. We’ve had a lot of misfortune happen; a lot of mechanical issues. It feels good to win here at Waterford. I had a good starting spot and the car was really good. It wasn’t as fast as the last time we were here but today was a little different weather. I’d like to thank Pauly Dunigan and family for giving me the opportunity to drive this car, the crew, and sponsors Power Mist Racing Fuels, Tower News and LH Wheeler Trucking. I lost a good friend recently and I’d like to dedicate this win to him. This one’s for you Bill.”

Following McKennedy across the line at the checkered was Ben Seitz who had moved past Mike Ordway Jr. in the 21 after a lap 36 restart. Seitz, who has one feature win to date on the ISMA trail commented, “The car was awesome tonight. I’ve got to thank my car owner Dickie Bien, my sponsors. Sam Lorusso and family, the whole crew does a real nice job. I’m really happy when things are going well.’

Ordway Jr. answered the call to fill in for injured driver Eddie Witkum Jr. in the P&L Motorsports 21 and came home with a fine podium finish. He was elated with the results.
“It’s been a while since I’ve done this. They called me up and needed some help when Eddie got hurt. They needed someone to fill in. They’ve done a lot for me so the least I could do was help them out. The guys gave me a good car. To come home third – I can’t really ask for anything more. I’ll just see if I get to do it again; just wait to see what happens.”

After torrential Friday rains postponed the Lee USA Ollie Silva Memorial, the ISMA group was greeted with sunny skies at Waterford on Saturday. The 19-car field was decreased during practice when the brand new Wolf 7 driven by Jon Gambuti blew a motor and then the 65 of Tim Ice dropped a valve. The 61 driven by Mike Ordway Sr. after Ray Graham Jr. vacated the ride, was involved in a heat accident, the results of which may have caused his early demise in the feature. Heat flags went to McKennedy, Lou Cicconi and Joey Payne, subbing for Timmy Jedrzejek, absent due to a work commitment, in the Soule Racing 32.

McKennedy, as aforementioned, had the pole sitting alongside Ordway Jr.’s 21, when the 17-car field took the green. Unfortunately, before on lap was complete, a massive pileup occurred in turns one and two affecting Lou Cicconi, Danny Lane, Justin Belfiore, Jeff Locke and more. It was here Ordway Sr. stopped the 61 in the front. He exited the race and did not return while most of the others were able to make quick repairs and returned to resume the race.

McKennedy took the speedy 79 out front quickly at the green and on a track he had garnered some modified wins on, took control in the super. He was picking his way through the tail of the field by lap 10 as Ordway Jr., Mark Sammut, Ben Seitz, Mike Lichty, Alison Cumens, Eric Lewis, and Rob Summers vied for spots behind. ISMA point leader Lou Cicconi, after being hooked in the first incident, was methodically working his way forward.

Yellow flew on lap 21 for the Dan lane 97 with several cars pulling into the pits for more adjustments including Locke, Payne, Summers and Cicconi. They would all restart at the rear.

Back underway McKennedy pulled away from the pack and glided around the “Bowl” until the Duggan 51 spun on lap 35 to bunch the field behind Jon once again.

And once again, on the restart green, McKennedy pulled away as Ordway Jr. Seitz, Sammut, Lichty, Cumens, Lewis and again Cicconi tailed. A lap 36 slowdown, the last of the race, saw Dan Bowes go pitside.

The only change of position on the green was for second when Seitz pulled past Ordway Jr. as McKennedy had already pulled out of sight.

With five to go, McKennedy had victory in his grasp, as far behind were Seitz, Ordway Jr., Lichty, Sammut, Cumens, Lewis and Cicconi, staying pretty much in their spots.

McKennedy passed under the checkered for his first win of the ISMA season as Seitz, Ordway Jr., Lichty and Sammut held their top five spots.

2012 ISMA champ Lichty, coming off a disappointing Hy-Miler 100 finish, was somewhat satisfied with fourth as he commented later from his pit.

“Fourth – I’ll guess we’ll take it for what the day brought us. We started with the car we usually run here and actually won here with before. Johnny’s been running that car for a little this year and I’m really not sure what is wrong with it. Maybe it’s out of square or something. We’ll get it back when we get it back to the shop and figure it out. So we went to the other car that we’ve won three races with this year, so far. We just struggled. We had no time to practice with it. We struggled in the heat race. We were lucky enough to finish fourth and miss the big wreck at the beginning. We’ll take it and keep plugging. I’m excited for Delaware. We ran good there last year so we’ll see what happens Friday.”

Mark Sammut, who quietly sits in third in the ISMA points behind Cicconi and Lichty, was okay with his fifth. “Considering how the day started out, fifth is good. We struggled a little bit all day actually. Fortunately we had a good starting spot in the feature. After the second restart we moved up quite a bit. The car was decent off the start, but the further we went, the looser we got. I was just kind of hanging on at the end. Too bad I didn’t get a little better run on those last two restarts because they both cost me a spot. All in all, we finished fifth, rolled the car on the trailer and we’ll get ready for next week. It’s not a bad day at all.”

The Hard Chargers of the Race: sponsored by Dr. Mom Says School is Cool and Colonel Arnold Briggs in memory of Sgt. Charles T. Brigss, USMC go to Ben Seitz and Mike Lichty ($100 each).