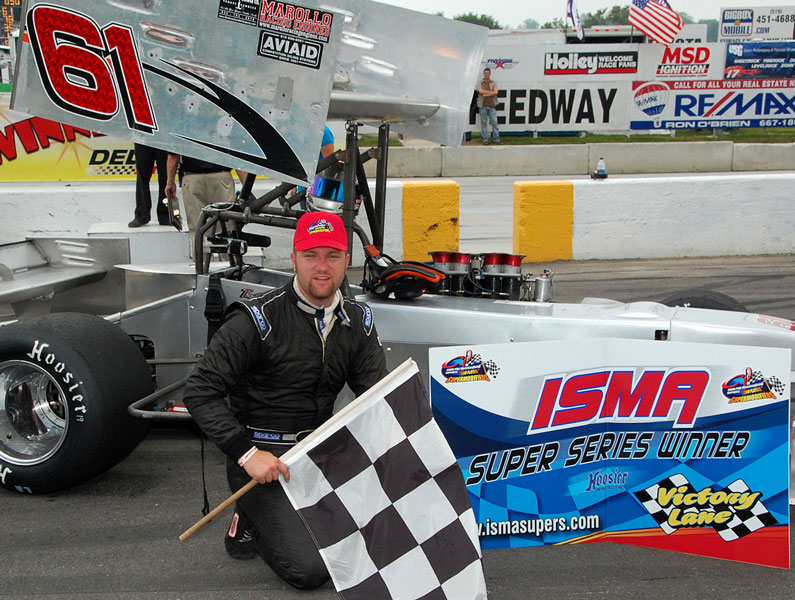 Delaware, Ont. – Sunday, for the second day in a row, the ISMA supers had to fight with Mother Nature. She won on Saturday, washing out the entire scheduled show. Sunday, a hot, humid day produced a slight rain delay, but in the end the racing and Dave Shullick Jr. won out. What looked to be a career-first for Vern Romanoski gave way to Shullick’s second win of the season with just two to go. Shullick stole the lead from Vern in the second turn when Romanoski slipped high. Vern’s second then slipped away when he slid around the next lap to bring out the caution. Shoe II was able to withstand a quick surge from now second place runner Mark Sammut to take the checkered.

Said the Ridgeville, OH driver after the race, “It was just a good race. Sammut and Romanoski ran real good races. They were up there. I think everybody lost tires about halfway in the race. I was just hoping that our tires went away less than everyone else’s. It kind of looked like that because they were backing up pretty good in the last ten laps. We just capitalized on it. It was another good win. I’d like to thank Clyde and Susan Booth. We had some rough luck Friday night and we fought back. We worked on the car a lot this weekend trying to make it better and we had a really good car today.”

Sammut, who finished second, commented, “On the first green I thought we would have had something. I think we were gaining on Vern and I don’t know if I touched him or not on that restart or not. But we damaged the nose wing and after that we were really tight. I couldn’t steer it at all. So we were just more or less hanging on. Vern was definitely faster. You have to hand it to him. It’s too bad he couldn’t make it one more lap. He had a great run going and we definitely didn’t have anything to challenge him. Then the 61 was definitely a little quicker than we were once he got by me. The track was really slippery and with the damaged nose wing, we’re glad to finish second. We’ll take a second and a fifth for the weekend. We did a whole bunch of damage at Sandusky. We finished the car at 3 o’clock Friday afternoon, loaded up to come out here and then had to change a rear end this morning. So all in all it ended up pretty good considering how it might have ended up.

Jeff Holbrook joined the hot and tired top duo on the podium. “I thought it only got hot in New York and it was nice and cool up here in Canada, said Jeff. “You fans are awesome. Thanks for chancing the weather and coming out here today to watch us. I hope we put on a good show for you. I look forward to coming back here next year. Thanks.”

Bobby Haynes Jr. and Vern Romanoski led the 21-car field to green with the 5 of Romanoski taking up the front spot and Mark Sammut quickly up to take second and away they went.

Lap 9 saw a yellow for Dave McCullough’s 3 which bunched the field behind the green 5. But Vern, who had traveled 15 hours to compete at Delaware, left the others behind on the restart. Today looked to be his day.

Danny Lane brought out the yellow again on lap 14 with a simple spin. Lane pitted but unfortunately got caught behind a car from another division while he tried to exit the pit. Lane was left behind at the green much to his dismay.

Romanoski was again in command with Sammut, Shullick Jr., Holbrook, McKnight, Haynes and Rob Summers next in line. Everyone was watching the skies for a possible thunderstorm and for the halfway mark.

Yellow dropped on lap 23 causing more anxiety when the 51 of Dave Duggan spun. Russ Wood and Michael Barnes made quick pitstops as Duggan resumed at the tail of the field.

One more lap and another yellow as Dave McKnight suffered a flat after a brush with the wall. He was able to make the change and pull in at the tail, but on the next restart, Dave’s 94 ended up in a jingle with Duggan and Rich Reid and this time McKnight was done.

Still trying to complete lap 24 and reach halfway, Vern took off again with Sammut and Shullick the nearest challengers. Holbrook, Summers, Perley and Seitz were closing in on the front-runners.

Vern’s dream of a first win came to end shortly thereafter. He described it this way later in his hauler. “We had a really good run going. I came into some lap traffic. The line that I had to take worked well down low, diamonding the track. When I tried to set out wide, I drove in deep and the car just shoved up and got into the marbles. I couldn’t get it turned back down. And, we made a mistake with two to go. I’d like to thank everybody who helps me – Brad Lichty, Perley, my crew who stand by me race after race and who work tirelessly. Maybe next time.”

After Vern brought out the yellow with his spin, Shullick was unchallenged to the checkered on the restart. Sammut, Holbrook, Perley and Summers filled in the top five.

Perley, after a rare DNF on Friday, was content to survive for fourth. “I didn’t have a good car, but I didn’t quit. There wasn’t any passing out there. The track was very, very difficult. I kept on trying to wear people down before I wore down. At the end I think it was about even. I feel bad that Vern didn’t pull it off. It was just one of those deals.”

Summers, who was drenching himself with cool water back in his pit area after the hot run, indicated, “The Essex Seafood, Dr. Mom’s car was good right off the trailer. We made a bunch of changes yesterday while it was raining and we went in the right direction. I think in the feature the track was just so hot and greasy, it made it so hard to pass. I think if we had started on the pole I think we could have been good. I know the 61 was real good, but we were probably a second place car, if we could have just found a way to pass.”

With the Corr/Pak $4000 bonus for a repeat winner evaporated with Jeff Locke’s early demise, the extra cash was split between the top fives in each event, giving an extra $400 to each of those finishers.