ROB SUMMERS CRUISES TO ISMA WIN AT DELAWARE ON SATURDAY 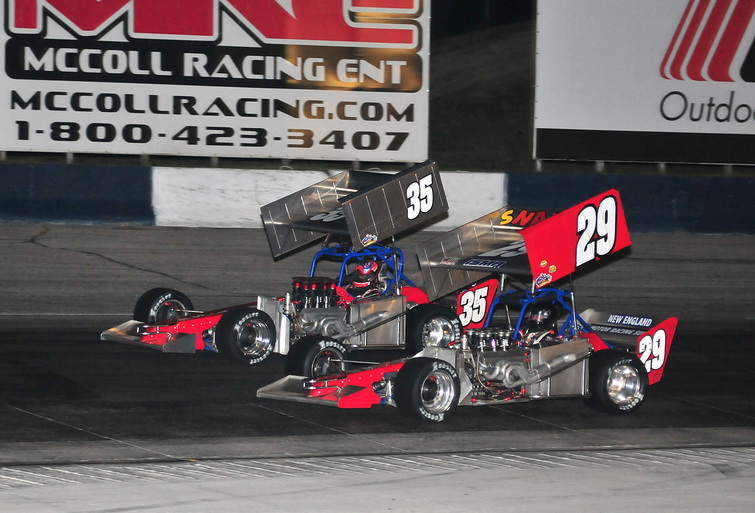 Delaware, Ontario  – Rob Summers became the sixth different winner in the eight races run to date on the ISMA tour Saturday night at Delaware Speedway in Canada. Summers took over the Jeff Holbrook-owned 35 ride earlier this year and since then he’s been getting closer and closer to a victory. The Vernon, CT driver came to the half-mile oval on Friday after two strong second place runs at Sandusky and finished a competitive fourth following some of ISMA’s best. Saturday was his turn to be the one to follow. Starting tenth in the field, he was up to third by lap ten. A slip on lap 15 by Mike Lichty who was trying to pass leader Bob Dawson, gave Summers a shot at second and then on lap 27, he drove by Dawson in traffic going into turn two.  Summers pulled away from Lichty and was on his way to victory. The win was the second in his supermodified career.

As always, Summers gave praise to his car owner and team. “The car has been on rails ever since we unloaded it this weekend. The crew did such an awesome job – Jerry, Mike, Brian Allegresso, and the whole JWJ team. They gave me one of the best cars I’ve ever driven. It was unreal – it went on the outside and inside. After I made the pass for the lead I was able to kind of just ride around out there.  Again I can’t thank Jeff Holbrook enough for giving me the opportunity to drive that car.”

Mike Lichty also picked up his second podium finish of the weekend as he chased Summers to the checkers.

“It’s been a good weekend for us – third last night and second tonight. It seemed like the pace was pretty quick. All the cars in the top ten seemed to be running within a tenth or two of one another. That made it quite difficult to pass. I tried Bobby Dawson on the outside and the car bottomed out really bad and that allowed Robbie to get underneath me. After that we just got tighter and tighter as the race went on. Hats off to Robbie. I’d just like to thank Patco Transportation for sponsoring last night.  Without my mother and father I wouldn’t be doing this gig. Also definitely thanks to Rockway Building Supply. They put their name on the car this weekend along with Stage Door Transportation.”

Russ Wood, the second half of the Holbrook team in the top three commented on his run. “We struggled earlier in the day. We were kind of loose and then in the feature we were a little too tight. It’s tough passing here and Rob was really, really hooked up so he definitely checked out. It was a good race for the team – a first and a third. Mike Lichty’s been tough and he’s going to be tough all year obviously. He’s on a roll. All and all it’s not a bad night for us.”

Bobby Haynes had the pole for the ISMA 50-lapper and used it to jump to an early lead but a lap four restart for a stopped car, allowed the outside pole sitter Bob Dawson, to take over the spot. Dawson immediately tried to pull away but Mike Lichty was quickly up behind the 28 to challenge as Rob Summers put the 35 into third past Haynes.

On lap 15 Lichty made a move on Ohian Dawson but slipped up in the process allowing Summers to duck under for the runner-up spot. For almost another 15 laps, the Dawson, Summers, Lichty trio ran nose to tail around the track while Ben Seitz, Russ Wood and Mike Ordway Sr. raced behind a slight distance away.

Summers finally seized the opportunity to get the drop on Dawson in traffic and took over the point on lap 27. Robbie put the 35 on cruise and sailed away from Lichty and soon to be third place runner Russ Wood.

Only one more yellow, a spin by Bob Bond on lap 37, allowed the challengers to take a last shot at the leader, but to no avail. On the restart, Lichty, Wood, Ordway, Shullick Jr., and Seitz could not get close to the leader.

Summers crossed under the double checkers all alone ahead of Lichty, Wood, Ordway and Seitz for his first win with the Holbrook 35 moments later.

Ordway, who had crashed just after his Friday night victory, was happy to be in fourth.

“This is pretty good after what we went through after wrecking it last night. Fourth, we’ll take it. The water pump went this morning and we had to change that. Everything seemed to work out pretty good for the feature. If we had made a few more changes we might have been a little better off and maybe had something for the leaders. That’s racing. You don’t hit it right all the time.”

Seitz, who is also in his first year with a new team, was very pleased with his second top five in as many nights.  Said the Bourne, Mass. former NEMA midget champion, “The car was definitely good tonight. We’re starting to learn what this car wants. We still have some to go, but we’ll get there. Again I have to thank my sponsors – Sam Lorusso Heavy Equipment, S.M. Lorusso and Cape Cod Aggregates. And I have to thank the crew, my parents, Buck, Gilbert – my car owner Dickie Bien who works so hard and makes this whole deal happen. I can’t thank those guys enough.”