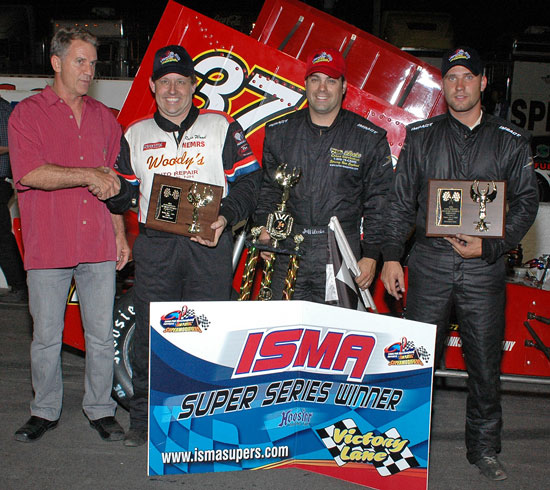 Delaware, Ont. – Raymond, New Hampshire’s Jeff Locke grew up watching some of New England’s best supermodified drivers compete. At 16 he was working on the #27 Shea super driven by Russ Wood. He never dreamed then that he’d be racing against them someday. He certainly never believed that he’d beat some of them in his first full season of ISMA supermodified racing. On Friday night at Canada’s Delaware Speedway he did just that. Starting on the outside of the front row, Locke led every lap of the 30-lap sprint holding back Russ Wood for half of the race. After a stint with NASCAR as a tire changer and then crew chief for Greg Biffle, Locke returned home to pursue his own racing career.

After several years in the small block supermodified ranks, Jeff moved on to the ISMA big blocks. It took him only eight races into 2009 to accomplish what some seasoned veterans never have. He had garnered his first career ISMA victory. Locke didn’t really know what to say after his dominant win.

“This is unbelievable. I don’t think it’s sunk in yet. There are such great competitors here like Russ Wood; to beat someone like him, somebody I grew up watching, to win against him, I can’t believe it. To just race against him and guys like Chris Perley is something else again. Never mind the winning. It’s just unbelievable. The car was great. The motor was great. Everything ran perfect. It was a pleasure to drive tonight.

“My thanks go out to Richard Witkum. He works hard on this thing. I don’t have much of a crew. It’s just him and me this week. My father is back home manning the company – Locke Crane Service. Eddie Witkum – he’s back home too. He had to race tonight and I hope everything went well there. To everybody at R&R Competition Engines, everybody at New England Racing Supply and Shanks Oil Company- just to everybody who has put this together. I still can’t believe it.”

Russ Wood moved from seventh spot into second by lap 14. But despite several cautions, he was unable to catch the high-flying 37 of Locke. Said Wood of his runner-up finish, “Our car was going really good. I was moving up but after 15 laps I was getting tight. I knew I might be in trouble. It got tighter and tighter. I could see Jeff but I just couldn’t reel him in. He had an open track and no traffic. Our car is getting better and better. This gives us something to work on for tomorrow. I’m happy with it.”

Mike Lichty, who had just come off a devastating crash in the Kasey Kahne Steel Palace 100 at Oswego in his USAC Silver Crown car, put his supermodified into third past his teammate Dave McKnight with ten laps to go in the 30-lapper but was never able to catch Wood or Locke. Lichty, who was extremely sore after his crash 24 hours previously, was more than happy to take third and to bring his car home in one piece to race again Saturday.

Bobby Haynes and Locke led the way to green but only one circuit was complete when yellow flew for a slowing Chris Perley, who just made it into the pits. A broken brake line was the culprit. Said the defending ISMA champion; “I broke a left rear brake line again on the first lap. It’s too tight here to run without brakes. We’ve been in the situation before but that was when I was up front and running away. I didn’t want to nick up the car so we called it a night.”

The race resumed without Perley and with Locke and Bobby Haynes Jr. at the helm. Dave McKnight, Michael Barnes, Dave Trytek, Lichty and Mark Sammut were among the early pursuers.

Yellow flew on lap 8 for the 5 of Vern Romanoski who was able to restart but almost simultaneously, Dave Shullick Jr., stopped the 61 on the outer pit road with a broken nose wing. The car did not restart.

Locke was able to pull away on that restart a while near the halfway fellow New Hampshire driver Wood took over second. Locke put another rookie, Dave Duggan, down a lap on lap 19, adding a little insurance to his lead.

Bobby Haynes, running a strong fourth, brought out the yellow on lap 23 as his 44 got high in the marbles and he hit the wall.

On the restart, the hungry pack behind Locke bore down on the rookie driver, but to no avail. Locke was running to perfection and Wood was left to tend with Lichty and McKnight, who were followed by fellow Canadian Mark Sammut.

At the checkered, it was Locke, Wood, Lichty, McKnight and Sammut making up the top five.

Mark Sammut, who sat second in points behind Perley going into the event, gained a few markers on the Rowley driver by finishing fifth.

“It wasn’t a top night but we’re glad to finish fifth,” said the London, Ontario driver. “The car is more and less in one piece and we’re all together for tomorrow. Hopefully we can make some changes and try to get a little better. The car was bad after we had some green flag laps but we were really hurting on the restarts. The car slides all over on the restarts for three or four laps. It was a short race and everybody in front of me was a little bit better than I was on cold tires. It took me a little longer to get wound up and every time I did, the yellow would come out.”

Locke will now have a chance at an extra $4,000 Tammy Ten bonus from John Brush of Corr/Pak should Jeff make it to winner’s circle in Saturday night’s 50 lapper.