TWO FOR TWO AT DELAWARE FOR LIQUID LOU 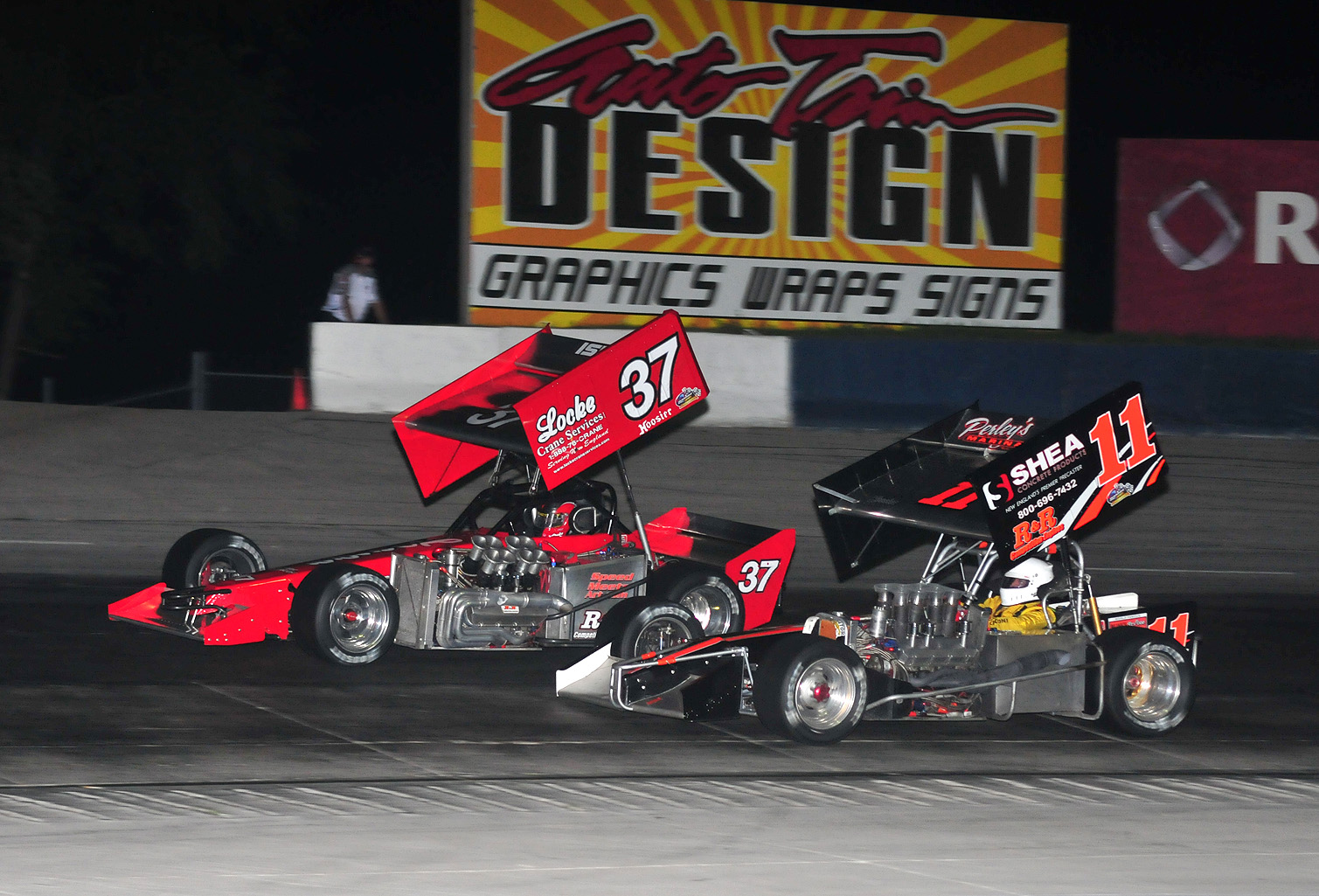 Delaware, Ont. – “Liquid” Lou Cicconi proved Saturday night at Delaware that he really enjoyed driving the Vic Miller 11 by winning the second leg of the ISMA series at the Canadian half-mile. Cicconi tracked down an equally awesome-running Johnny Benson Jr. in the 75-lapper and passed him on lap 30 but a caution negated the pass and Benson reclaimed the lead, which he would hold until the late stages of the event. But, Cicconi was right there watching for another chance, which he got on lap 63. Cicconi and Benson swapped the lead a couple times in that one circuit until Benson and his car finally gave way. Cicconi flew through the remaining twelve laps to take the win, while Benson pulled suddenly into the pits. A broken radius rod bolt was Benson’s demise as Lou sped to his second straight victory in the famed Miller 11.  The double Delaware victory was worth almost $10,000.

In victory lane Lou had nothing but praise for his adversary Benson and his car owner and temporary team. He described his two passes of the North Carolina driver. “I passed him once in lapped traffic, and that wasn’t really a fair pass.  Then I passed him clean after that before he broke. But, I’ll tell you that Johnny Benson is a real smooth driver. He’s really, really good, that’s why he runs trucks, I’m sure.  When you follow a guy like that you know.  I knew that I was going to pass him so I stayed with him on the restart. I was better than him in the middle and I could enter better. This is seriously awesome, winning two in a row. This is a great car and a great team.  I hope Chris talks to me after this weekend. He’ll think I’m trying to steal his ride!” 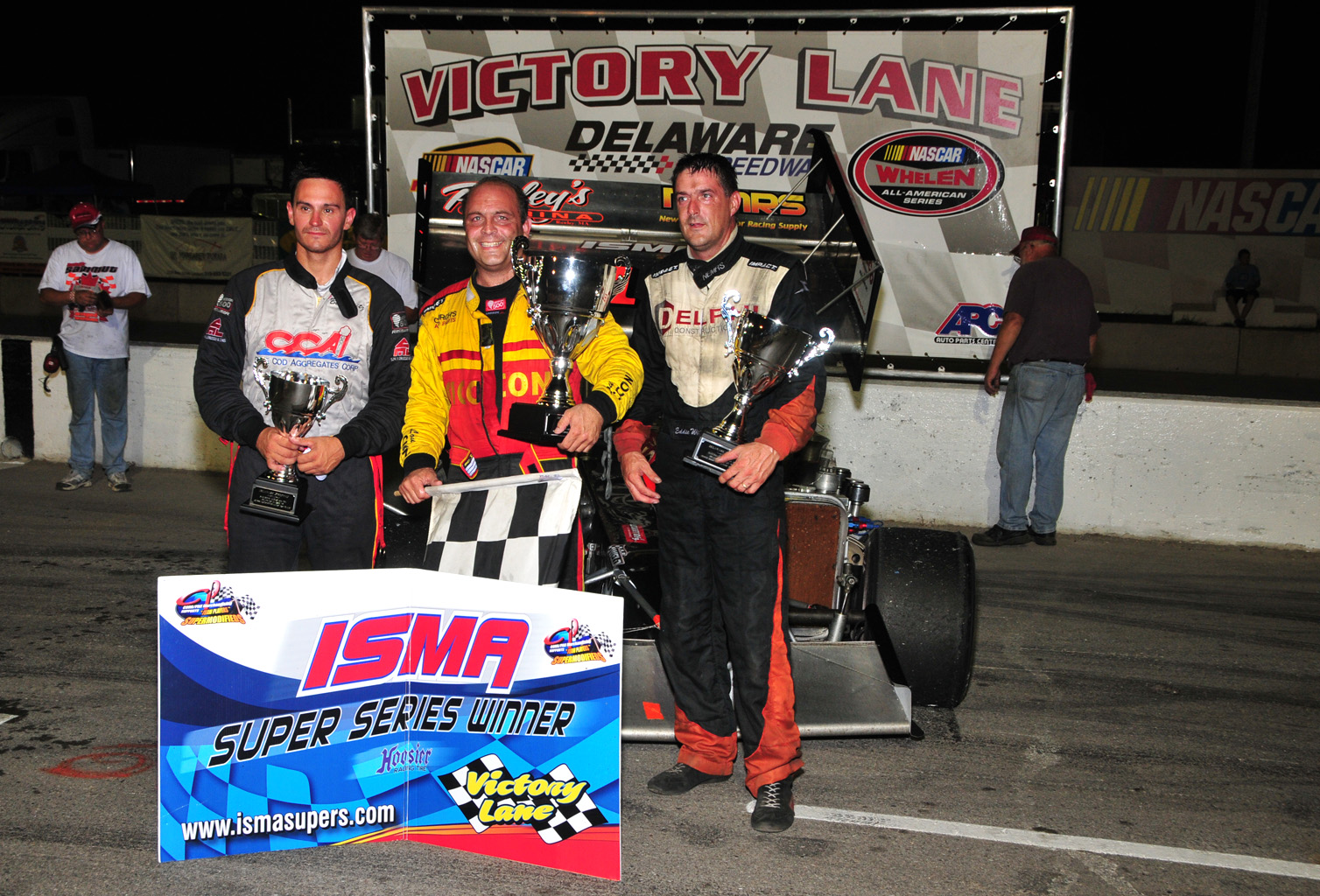 Benson was as disappointed with his loss as Cicconi was elated by his win. “I feel really bad. To start off and to have a race car as dominant as that car was. We had a problem earlier with the brake caliper that broke. I think that had a result of chasing it back to the radius rod, which I think stretched the bolt. It’s just something you never think of. I think it was a tad loose from the stretch. The harmonics sat there and worked on it and worked on it until at 12 laps to go, it broke. Those are hard to take.   The car rocked. It was really good. I really thank Brad and the guys for a super opportunity. We’re getting this little girl to run really good though. It’s an old, old, old car.”

In second, a distance away but within sight was Eddie Witkum Jr. who recently took over the driving chores in the Lane 97. His run was his best to date.  “This is definitely my best run so far. We got a couple of spots through attrition but all in all I think we would have gotten them back. At the end the car was good. It was a little loose. I didn’t have anything for Louie. I needed a half a lap or so to get going. It really doesn’t matter. When you finish second to the 11 car you’re doing good! Especially at the end of the race if the car is still on the same straightaway, you’re doing good.

“We made some changes to the car. I was loose right from the start and tried to baby it through and save something for the end. But it didn’t get as crazy loose as I thought it was going to be. I was trying not to spin it out and to keep fighting for each spot.  I’m really proud of the team. Half of them aren’t here because we’re so far from home. But, the team needed this just as much as I needed this. Howie needed this, as did his wife Debbie. So a second feels like a win to all of us. I’m happy for everyone.”

Ben Seitz, whose consistency had him third in ISMA points going into Delaware, ran a steady race to finish third. “It was a good race. The car was good and it’s definitely getting more competitive every time we’re out. I need to thank my car owner Dickie Bien, my sponsors Cape Cod Aggregate, Lorusso Heavy Equipment, R&R Motors, and Linblad Chassis. Without them, this wouldn’t happen. It’s starting to come together. We got some spots on attrition, but the car was still pretty good lap in and lap out. In the beginning I was just kind of riding around and hoping to have something for the end. At the end it just loosened up. Eddie had an awesome race. I followed him the whole time. His car was really rotating. Honestly I didn’t have much for him. He had a good race.”

Another ISMA up and comer, Jeff Locke, took the early lead, but Benson, quickly put the 37 into second, leaving a two-car battle between Cicconi and Locke for that spot. A quick Mark Sammut tucked into fourth with Witkum and Mike Lichty, fifth and sixth

Benson was definitely in command as the laps flew by, but Cicconi was watching and waiting for some traffic or a yellow. On lap 30, Benson was just passing Brandon Bellinger in the Lane 9 when Cicconi jumped at the chance to dive under Benson to take the lead. Several incidents happened at this juncture involving Jeff Locke, then Craig Rayvals and Mike Lichty, which negated the pass.

On the restart Benson was back in the lead and now it was cat and mouse as the 74 pulled away from the 11. Sammut, Witkum, and Seitz led Timmy Jedrzejek, Rob Summers and Russ Wood around the half mile for many laps.

With twenty to go, a final yellow found Sammut, whose team had put together a badly wrecked car from Sandusky during the week, brushed with the Rich Reid 92 while attempting to pass the slower car. Mark was sent to the pits for a quick repair but out of his potential third place finish, a heartbreaker for sure.  He restarted at the tail of the field.

But, this final yellow, also put Cicconi right on Benson’s back bumper and the shootout looked to be an exciting one as the two quickly made it apparent they were each looking for the win. On lap 63, Cicconi got his chance and took it, but Benson ride back alongside to nose ahead. Cicconi then nosed back by the 74 to lead the next lap.  There would be no more chances for Benson to get Cicconi back, however, as he exited the race with his broken car.

Cicconi was cruising when he took the checkered 11 laps later. Eddie Witkum Jr., Seitz, Timmy Jedrzejek and Rob Summers were nose to tail a distance back for the top five.

Jedrzejek, fast becoming a consistent force to reckon with in the Soule 32, said later, “I guess it was a good race. There were a lot of fast cars. Congratulations to Louie and the other guys who finished up front. We were consistent from the start to the finish. We had what we had. We came up a little bit and then lost a couple and then came back up. A couple cars dropped out which gave us a few positions. Obviously, I can’t thank Danny Soule and the entire team enough. Again, if we just keep ticking along and getting top five finishes. We’ll stay happy and have a good ride home.”

Summers, too, is no stranger to top five finishes as he sat right behind Timmy J in the points going into Canada.” We had a pretty good car. We had some problems in the heat race and the guys worked really hard to get that straightened out before the feature. The race was hard tonight. We got by a couple cars, but it was hard to pass.  We’ll definitely take this fifth place.”