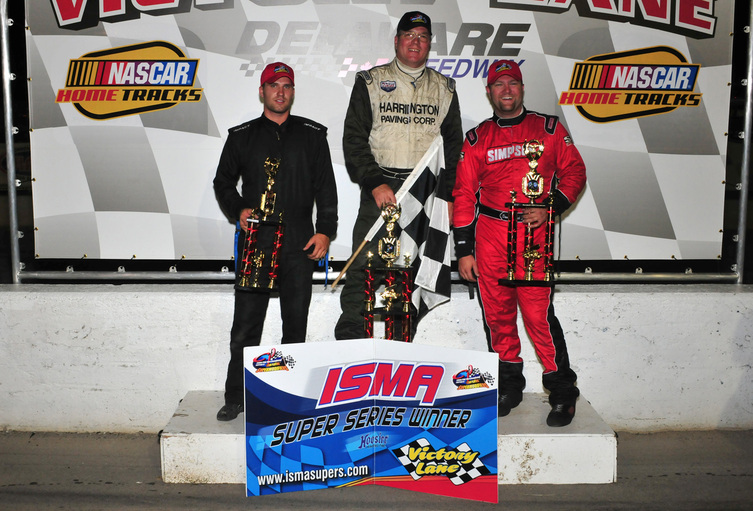 Delaware, Ontario – Mike Ordway Sr.’s victory at Delaware Speedway on Friday night ended in a rather bizarre fashion, when after crossing under the double checkers, his Vic Miller-owned supermodified crashed in the first turn wall. Instead of parking in victory lane, Ordway exited his mount halfway from the finish line, and watched as it was towed away. Ordway had been chased throughout the short sprint of a feature by Dave Shullick Jr., but was able to fend off those challenges until after the race was over. He described the finish of his second ISMA feature wins this season.

“I won the race and got down across the line and into one when the left front brake rotor broke. That was all it took. It just locked up the front wheel and it went around. There was nothing I could do about it at that point. Other than that the car was really good. It’s going to be good for tomorrow night, but I don’t know about now though. I was happy to win and to see all the fans that came out. We put on a good show I think, going 20 laps without a caution. That was good.”

Dave Shullick Jr. accepted his runner-up spot happily, after a disappointing Hy-Miler 100 two weeks ago. “It was a good run. We’ll take it. I got to second and the car was really, really good. I thought I’d have something for Mike. We were both running about the same speed and that’s what it boiled down to. I could get to his rear bumper and then do nothing with him because we were so close in speed. I would have needed traffic. I think I was a hair more drivable then he was, because when we got into traffic I could move around a little better, but not when we were by ourselves. After the restart, he moved away about 3 or 4 car lengths but as the run went on I started to reel him back in. I think if it had been a 50-lap race we probably would have got him. So, we’re looking forward to tomorrow. I think it will be good.”

Current ISMA point leader Mike Lichty ran third or fourth for most of the quick 30-lapper racing mainly with the 17 of Ben Seitz who he finally got by in the late laps.

Said Lichty as he was swamped by well wishers in attendance for the PATCO Transportation-sponsored night.

“We’ll take third. Actually it was a cool race between Ben Seitz and I. We probably ran wheel to wheel for five or six laps. That was definitely interesting and fun too. I like racing Ben. It was hard to pass on the outside. I tried to get outside Ben earlier and that’s when DJ got by me. It looked like the only place I was going to pass anybody was on the bottom. We learned some things for tomorrow. It’s 50 laps and we’ll see what happens. I’d like to thank Rockway Building Supply for giving us a hand this weekend, supporting us and obviously my dad with PATCO and everybody from there who came here to watch.”

Lichty led off the night’s racing by taking the first of three qualifying heats but action was stopped for a lengthy period at the start of the second heat when Hy-Miler winner Mark Sammut was pushed to the wall just after the green, got out of shape and caught a wheel causing his 78 and that of Rod Sauder, driving the Morton 70, to do a double flip down the back straight. Sammut did some aerial acrobatics, landing finally on all four tires while Sauder ended up on his side. Neither driver was hurt but Sammut’s car was later determined pretty much unfixable – at least overnight. Morton thought he’d be able to return for the next night’s racing. Dave Shullick Jr. claimed the heat win while last year’s Friday night winner, Jeff Locke, took the third heat checkered.

Ordway Sr., from the front row, wasted no time jumping out to the lead of the remaining 18-car field and with 20 straight green flag laps ahead, he was able to pull away from second place runner Ben Seitz as Mike Lichty, Shullick Jr, Russ Wood, Dave Duggan, Rob Summers and Danny Lane tried the catch the flying 1.

Just prior to halfway, Shullick Jr. moved by Seitz and the two leaders pulled away as they passed by Bobby Haynes Jr. and then sandwiched Rich Reid driving the Lehnert 92 to add some markers between them and the rest of the field.

The race slowed with the one and only yellow flying on lap 20 when the Jeff Locke 37 spun.

On that restart, Shullick knocked on the door of the 1 but as he said, could do nothing after that. Mike Lichty finally moved into third around Seitz on lap 22 as Summers, Wood and Dave McKnight in the Lichty 74, battled for fifth.

Time ran out for any further challenges and Ordway appeared to be headed for victory. He was, and then landed in the first turn wall, not doing much damage, but bringing his victory to a somewhat unglorious conclusion. Shullick Jr and Lichty shared the podium with Ordway while Summers grabbed fourth in the waning two laps from Seitz.

Summers enjoyed his race to a fourth place. “We had a good car. The JWJ team did a great job again. We started kind of deep in the field and I think we had one of the best cars out there. With only 30 laps I’m happy with the way we finished. This place is a fun place to run at night. It’s a real racy track. I think tomorrow’s 50 lapper will be fun.”

Ben Seitz was more than happy with fifth.  “We had a good race for most of the way and then got loose after that. We set it up aggressive because we knew it was a short race. I need to thank my sponsors Sammy Larusso of Larusso Heavy Equipment, Cape Cod Aggregates and S.M. Larusso and Sons. Without them we wouldn’t be here. I’d also like to thank the car owner Dickie Bien because he’s been working his butt off. We’ve had a rough season so it’s nice to finally bring home a nice finish for everybody. We’re looking forward to tomorrow. We should be all right. I’m optimistic.”

Note… A scary incident took place in the Haynes 44 hauler after practice when a faulty electric fuel pump ignited methanol while it was being transferred to a fuel jug. The quick work by the Delaware safety crew averted what could have been a truly explosive situation. Peg Haynes, mother of driver Bob, was treated for burns on her arms.