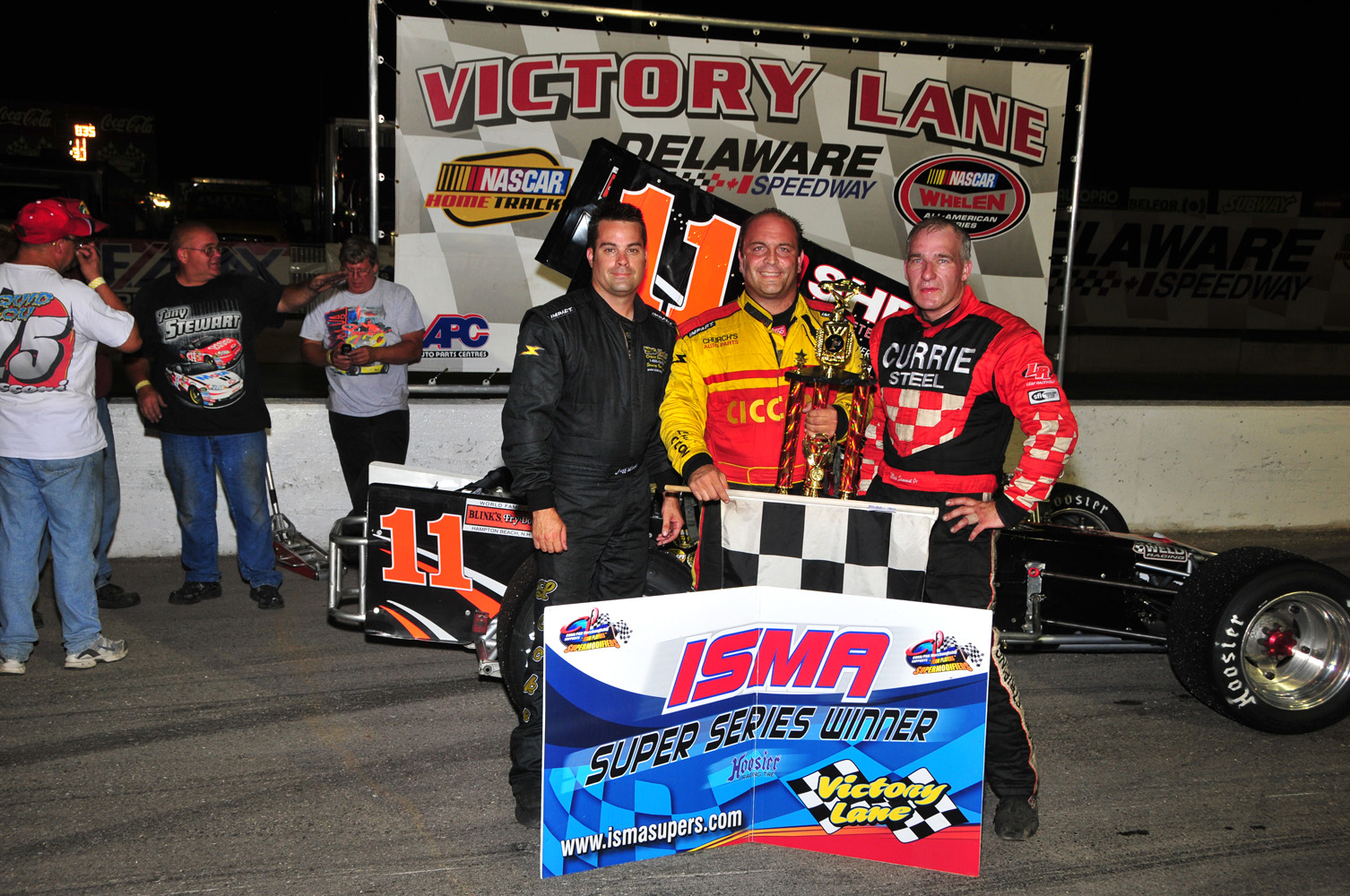 London, Ont – It’s not unusual to see the Vic Miller 11 in victory lane after an ISMA race. After all, it’s been there quite a number of times over the years. But, Friday night at Delaware Speedway, what was unusual was the driver climbing out from behind the wheel was Lou Cicconi Jr., not Chris Perley.  Cicconi, subbing for Perley, took the lead of the 35-lap event from Jeff Locke appropriately on lap 11, and was never headed.  Only one yellow slowed him a little before the checkered fell. Although Lou had never driven this car before, he had driven and won in an older copy. He admitted that he fit right into this one.

Said the Aston, PA veteran driver in victory lane, “It was a good run. This car is just like Rick Wentworth’s 10 was, but only faster. This one’s got up-to-date equipment and a newer motor. What a dream it is to drive this car. It’s so stable in the straightaways. It is really awesome. It really is. After I got by Jeff, there it was just gone.”

Jeff Locke, who led the first 10 laps, was coming off a scary-looking accident the previous weekend, looked strong out front, but was more than pleased to end up second. “I’m happy for Lou. He’s an awesome guy and he’ll help anybody out. It couldn’t happen to a nicer guy. The Miller crew works hard. Speaking of working hard, I can’t understand how my crew can give me one fastest car when we come to the track each week.  It’s because of Rich Witkum, my father for giving us good equipment, Rich and Rock, I can’t thank enough people – Shawmut Equipment and Locke Crane Services – everyone. We wrecked hard last week at Sandusky and just to come out of here in one piece was fine. I’ll take the second and come back tomorrow.”

Another guy who did some major repair work in the short span of time between Sandusky and Delaware was Canadian Mark Sammut who said of his podium finish. “We weren’t that good but we weren’t that bad either. We were loose at the end. We were lucky to have a good starting spot and then I was lucky they didn’t call me on that caution after the car got away from me, although I did hang onto it. Considering what we went through this week, it was a hell of a night. It’s too bad we didn’t move up a position or two, but that’s the way it goes. We’ll try again tomorrow.”

The short feature, a preliminary for Saturday, got off to a shaky start when polesitter Rich Reid got a little loose coming off four for the green and got into the first turn wall. The 92 was hooked and declared un-repairable for Saturday’s event, sending the Ohio team home. Ohioan Bob Dawson exited the race on the next restart. After one lap was down, Brandon Bellinger, in the Lane 9, flew the yellow and after a quick pit stop, was able to return.

The race settled down now as Locke took off on the restart of lap 2 leaving Cicconi, Sammut, Dave McKnight and Johnny Benson a distance behind. But Cicconi was moving rapidly forward and he closed up the gap by lap 10. On lap eleven, the 11 went under leader Locke in turn three and that’s all she wrote.

Locke and Sammut raced together for a number of laps while Cicconi pulled away. However, on lap 16, Mark got a little loose off turn two, looked like he was going to spin and then corrected it. The flagman dropped the yellow although the ISMA race director had not made the call, so Sammut was given his spot back.

Back underway, Locke and Sammut went back to their battle as Johnny Benson and Rob Summers were beginning to close on the pair in second and third. Back behind them were Mike Lichty, Ben Seitz, Timmy Jedrzejek and Russ Wood.

In the remaining ten laps Cicconi was slowed somewhat with some lap cars coming into play, but never seriously threatened.

With five to go, the 11 was well ahead, but the rest of the pack were ever so close together, from second on back to ninth.

At the checkered, Cicconi had one lap car between the Miller 11 and second place runner Locke. Sammut, Benson and Summers rounded out the top five.

Benson, who had also had some pretty bad luck at Sandusky, was happy with fourth. He described his race this way.” I guess it was pretty uneventful. We could have been a little bit better but the car is not quite where we want it. Fourth’s good. I’m not complaining. I’m just trying to think of what we need to do for tomorrow. We were a little off tonight but I think a lot of people were. The front guys at the beginning were gone but at the end they weren’t. They were almost on top of each other except for Cicconi I tried the outside a few times on Mark, but just didn’t have enough to get by anyone.”

Summers, in the Holbrook 35, was content with fifth. We started in ninth and the car was pretty good in the beginning. We got a little tight there at the end, but the whole JWJ, Woody’s Auto Repair team worked hard and gave me a good car.  Hopefully we can improve on it tomorrow.”