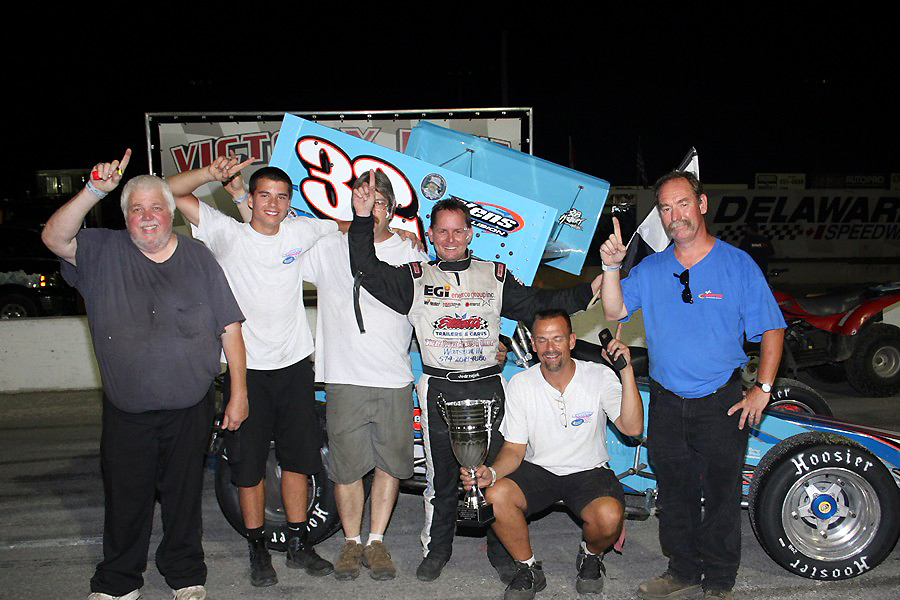 Delaware, ON – The world’s most powerful short track cars, the ISMA Super Modifieds hit the track on Saturday evening at Delaware Speedway finishing up their weekend with a longer, more intense feature than the previous night. Tim Jedrzejek (#32) of Independence, OH won the eventful 75-lap race taking the lead from Mike Lichty (#84) of Innerkip, ON in the last lap after a riveting battle for the lead. Jedrzejek, just off a big Hy-Miler Nationals win edged Lichty off the final turn on the final lap of the race to take the win by a mere .120 of a second.

Lichty commented later “Timmy J never goes high so I protected the bottom. Then he snuck up and got me on the outside.”

Lichty, who led the race for twenty-five laps, placed second. Eddie Witkum (#97) of Westford, MA led the first forty-nine laps and placed third. The race had four cautions flags. The caution flag on lap six, as a result of a car, the 48 of Terry Simpson, bursting into flame, became a red flag after a second car, the 33 of Rod Sauder, caught fire later into the caution. Due to the number of caution laps, it was necessary for the cars to refuel under the red flag situation in order to finish the race. No drivers were injured during the competition. The last yellow was for a spin by the 28 of Bob Dawson.

Notes… A lap 12 crash took out Johnny Benson and Rob Summers..Dave Duggan and Eddie Witkum Jr. drew front row spots for the feature with Dan Bowes and Mike Lichty in second row…The win for the Soule team moved them up the ladder in owner points with all three drivers behind him – Benson, Lichty and Cicconi, finishing behind and Benson a dnf…Mike Ordway Sr. and the Clyde Booth 61 left the speedway Friday with unfixable rear end problems in the 61…Ryan Coniam, the Friday night winner, had fuel problems and was pulled over for a check. The team fixed the problem but Ryan was victim of an accident a little later in the race… Eddie Witkum Jr.’s third place finish was the second straight Delaware podium finish in the Saturday night show…The next two ISMA races are at Lee USA Speedway on Friday, August 10 and Waterford Speedbowl on August 11.