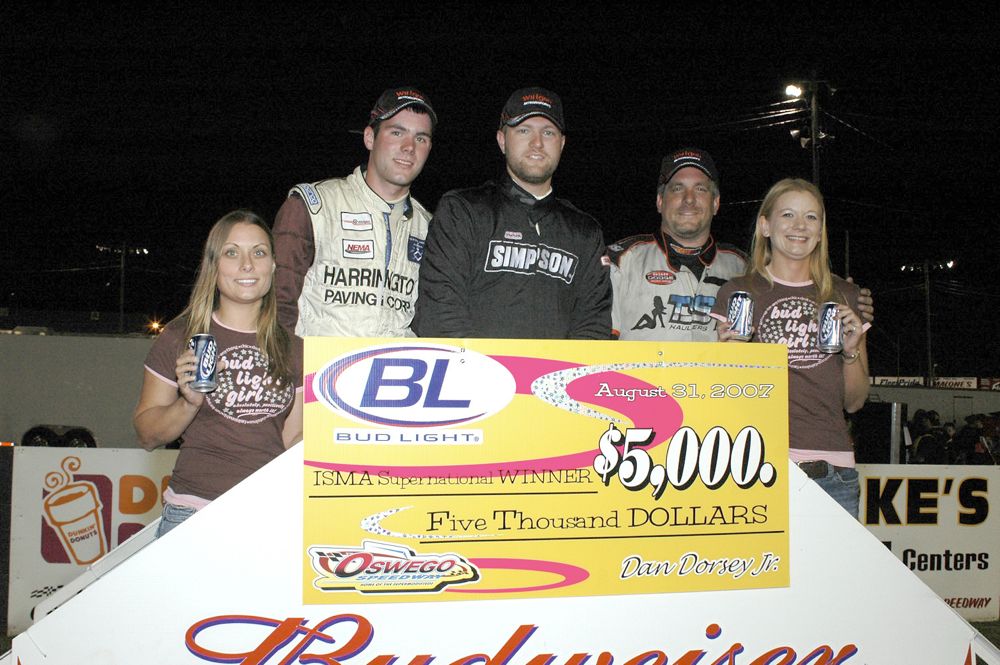 Oswego, NY – It looked like Chris Perley was well on his way to win number ten on the ISMA-Wirtgen season Friday night at Oswego’s Bud Light Super Nationals. Perley took the white flag and suddenly the yellow flew for the Vic Miller 11 when a pass attempt at a slower car failed. Perley was able to get restarted but the road ahead was long and the race was short. Ohio’s Dave Shullick Jr. was quite capable of taking over for Perley after chasing him for half the 50-lap event. Dave easily pulled away from Joey Payne, driving the Cicconi 75 and young Mike Ordway Jr. to take the win. It was the first ISMA win for car owner Steve Stout and Shullick’s career second. Shullick’s mom and dad, “The Shoe” were on hand to view the victory after missing Shullick Jr’s Oswego MSA win in June.

Dave said, following a ride around the Big O before a cheering crowd, “This is awesome. It was a great run. The crew gives me a great car every time out. We didn’t have the best car here today. We probably had the second best car. Chris had it hands down. It was unfortunate he got tangled up there. I’m not sure what happened. I almost spun myself out a couple of times trying to keep up with him. As I said it was unfortunate for him, but we’ll take them any way we can get them. The car was real good. We made a really drastic change because the car was tight. The car was really good early but it got really loose toward the end of the race. It was a handful toward the end. But it worked out. I’d like to say congratulations to Steve Stout. He’s tried for a long time to get his first ISMA win and this is it. Congratulations to him and his whole team.”

The second place finisher was Joey Payne who was in his first super ride in over two years. Aboard Lou Cicconi’s 75 for the first time that day, Payne started fifth on the field of 26 moving quickly into third where he stayed much of the race until Perley’s demise put him second in those waning laps. Payne would have liked to step it up one notch to dedicate a win to his lost NJ comrade, John Blewett who would have been behind the wheel of the same car Friday night had things been different. “I’ve got to thank Liquid Lou and the whole Cicconi team. They gave me a great car. It’s great to be back here at Oswego racing a super. It’s been a couple years of a dry spell for me. To come back here and finish second and to be contending for the win – it doesn’t get any better than that. I’d like to thank the fans for coming out. I wish we could have gotten the win for John Blewett. He was a good friend. He drove this car at Mansfield. He was looking forward to driving this car this weekend at Oswego. It’s a great loss and we’re going to miss him a lot.”

The mover of the race had to be Ordway Jr. who had time trialed poorly then had a mishap in his heat. He started fifteenth in the strong field but moved tenaciously through the pack in his first race at Oswego Speedway where his father had claimed so much glory. Mikey’s road to the third was a tough one but exciting to watch.

Said Ordway Jr. on the podium, “I wish we could have gotten a win, but we’ll take third. It was a good points night. I just have to thank my sponsors – Harrington Trucking, Vinal Excavating, Glenn Shanks Oil, and Wirtgen. It’s always been a dream to come here to Oswego and race. Now I finally haven gotten here in a super. We ran good tonight and we’ll be back tomorrow to try and put it in the show for Sunday. It seems like we passed some of the guys out there tonight five or six times. I just drove the wheels off of it. It was bad luck for Perley and that kind of stinks. I have to thank the Perley crew because they helped me a ton. I wish we could have gotten Joey (Payne) at the end but we didn’t have anything for him today. Our day started out badly and we were kind of bummed. We got stuck in a wreck but that’s racing. It turned out fine.”

Mark Sammut and Eric Shirey sat on the front row for the 14th annual Bud Light Super Nationals and it was Sammut out front from the green. The determined Canadian took off to a good lead over Kelly Miller and Joey Payne until yellows bunched the field on lap 7 and then again on lap 11 as several cars were struggling to find the setup, including Bob Magner and Dave Trytek of the Holbrook stable.

On each restart Perley was picking off a car or two and by lap 11’s restart he was third having just gotten Dave Shullick Jr. One lap later he was second. With a move off turn two on lap 14, Perley took control. Sammut stayed second with Miller, Shullick, Payne, Lichty, McKnight and Ordway Jr. the next in line.

Yellow flew again on lap 23 affecting Jeff Holbrook as a number of cars dove in and out of the pits. History repeated on the restart as several jumbles sent cars flying. This time hooks brought in Shirey and Joe Scanlon while Lilje and Cicconi, driving for Soule Racing, declared their nights finished. Vern Romanoski limped in and out as Justin Belfiore, Holbrook and defending race champ Bentley Warren made pit stops.

On each restart Perley, as been the scene many times in the past couple seasons, pulled easily away. Lap 29 saw another quick yellow for Rich Reid and this would be the last until the last lap flag flew for the Rowley Rocket himself.

While Perley cruised out front, Dave Shullick Jr. tried to catch up, driving as hard as he could. Kelly Miller held off Mark Sammut, Payne, Ordway and Dave McKnight. Unfortunately McKnight was under penalty for a jump of the lap 29 restart. As the laps wore down rapidly now, Miller’s 16 began to falter and he slid backwards. He would be Perley’s demise as he slid back to meet Perley coming in from behind. Coming up in the field was Greg Furlong who suddenly was on fire as he came around Miller, running seventh on lap 41.

With Perley in command at the point, Payne and Ordway Jr. – the vet and the kid – put on a show for third behind Shullick as Sammut and McKnight (not yet serving his penalty) held off Furlong.

Perley took the white flag and suddenly a half a lap later, yellow flew and the Miller 11 sat on the backstretch in a cloud of smoke. Perley described the events as only Perley can, which led to the yellow. “There was a lap car, which would be a blue one that looks like a sprint car. He was getting the passing flag for a couple laps. I went to the outside of him going into three. I got all the way alongside and he saw me and then he ran me all the way up to the foam. Coming out of the corner I lost it because I was in the marbles and he came down here and goes high again. I go down, get a run on him and he goes high again. So the white flag came out and I was losing time. I wasn’t sure who was behind me and how close they were. I shouldn’t have been fooling with him. But this time I start to go under and he goes sideways in front of my car. If I didn’t hit the brakes I would have run over him.”

Perley was pushed away to the rear and the race resumed with Dave Shullick Jr., Payne Ordway Jr., Furlong and Sammut the top five under the checkers shortly thereafter.

Furlong, who had started seventeenth, was more than pleased with fourth. “At the end we were good. We had a really good car. It sounds like Perley had a rocket ship. We started 17th and finished fourth. It’s nothing to sneeze about. It just kept getting better. Next year we have to do our homework. We have kind of struggled with the non-wing car. We wanted to test and we never did. We didn’t time trial well. We didn’t do well in the heat. If we could have started up front it might have been another scenario and then maybe not. DJ was running good. Maybe we would have finished second. But it was a lot of fun coming from seventeenth to fourth. We’ll take it. Thanks to my team.”

And, Mark Sammut, getting ever so close to that first ISMA win, commented, I lost three spots in the last five laps between getting hung up in lap traffic and the yellows screwing us up. But hey, we finished fifth and the car’s in one piece. We’ll take that. It could have been a little better but unfortunately it wasn’t. The car was really good at the start when I ran by myself. But every time the yellow came out, it started getting a little slipperier and a little slipperier. We’ll move on to All-Star next week and see what happens.”