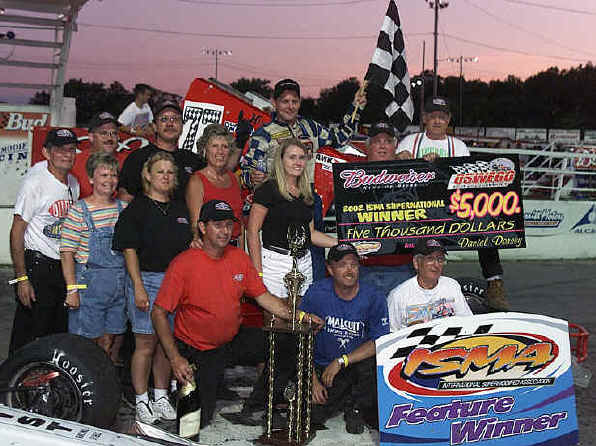 Oswego, NY – Despite ominous forecasts earlier in the week, the prognostications changed and Saturday’s race weather at Oswego Speedway was magnificent. So was the racing. A great field of cars and a large crowd filled the bill quite nicely to match the weather.

Independence, Ohio’s Tim Jedrzejek, whose supermodified race team lost their car owner Bill Kovacs recently, led the entire 50 laps of the ISMA Super Nationals to claim his first-ever Oswego win. Timmy J fought off the advances of ISMA point leader Russ Wood at race end. The pair each floored it coming off turn four of the last lap as a lap car approached, with Jedrzejek coming home the winner by a nose. The excitement of the $5,000 payday was dampened by the thought that their late car owner was not there too see the win.

Jedrzejek said in victory lane, ” A lot of people said I could win and I’m here in ISMA victory lane. Our car owner, Bill Kovacs, just passed away a few weeks ago. I think we had a little help tonight. This one goes out to him! ” He continued on to describe his wire-to-wire win, “I knew lap traffic was going to hurt me or help me tonight. Early on, I think it hurt me but at the end I think it’s what prevented Russ Wood from getting by when I picked that lap car off and he was stuck on the bottom. I’ll tell you when I crossed the line I wasn’t sure who had it. I thought I had it by a couple inches off four and I knew no one was going to lift that’s for sure. I was giving it everything I had there. We struggled a bit with the setup yesterday and I have to thank David May and Jim Mayfield. They totally changed the setup. Truthfully we were strong in the heat race, but we blistered the right rear tire and knew we weren’t going to make the feature finish that way. So they made some changes while I went and sat down in the shade. The adjustments they made worked. The car was just perfect.”

In turn Wood acknowledged the winner saying, “Those guys deserve to win. They’ve had a rough couple weeks, losing Bill. They can have this one tonight. Second definitely helps out the team with Joe not starting. We’ve been in a bit of a slump. We changed a motor yesterday. The guys did a heck of a job on that. I had a good car. It was close there at the end. I was getting loose. He was getting a little loose. I could see him right at the line. They just beat me. Maybe if I had a couple more laps we’d have got it. This helps me for tomorrow. I can get a good night’s sleep. I have a good car for tomorrow and I hope to time trial well. I hope to be there at the end. There are a lot of tough cars, but we’re looking forward to the Classic.”

Twenty eight of supermodified’s finest winged drivers were set to take the green for the Super Nationals when Joe Gosek’s 26 suddenly would not start. Gosek, whose car housed a brand new motor, said that water in the engine was found and it would not turn over. While the three-abreast winged super formation traversed the track on a wave lap, Gosek’s team struggled to get the car going, but had to park it, leaving 27 to take the flag.

Timmy J, off the pole, grabbed the lead and never let go. Mark Sammut, Nokie Fornoro, Ken Bell and Lou Cicconi were early challengers. Jedrzejek put the pedal down right from the start and was putting slower cars down by lap 14.

A yellow flag flew on lap 17 for the 49 of Pat Shullick who had tried to get into the pits with an ailing car but failed. Howie Page, John Payne and Jamie Letcher pitted here. Payne tried to make it back but couldn’t complete but a few laps. Page and Letcher filed in at the tail.

Timmy J was off like a shot on the green with Fornoro getting a jump on Sammut who soon found himself behind Bell, Cicconi, and Russ Wood. Jedrzejek was in command at the halfway mark with Fornoro, Bell, Cicconi, Wood, Sammut, Dave McKnight, Jamie Timmons and Chris Perley strung out behind intermingled with lap cars that were victim’s of the 77’s onslaught.

On lap 30, Sammut’s fine run desisted and he would pit followed by Howie Page, who had arrived late at the track after working on the car’s motor. On lap 35, Joey Payne exited the field while Timmy J still held a strong lead over Fornoro. Moving into third by this time was Wood who passed Bell in traffic. Bell said later, his car was good. We were fast. We just ran into lap traffic and didn’t get the breaks. I screwed up a couple times and then

Russell got by me in two when I went up and got in the loose stuff a little. I was quick when I was by myself. This is a momentum track. If you let up a little, the guy behind will blow by. But finishing fourth was better than the first time we were here. The guys did a heck of a job. They work real hard for me.”

As the the Ohio driver saw the end nearing, Wood got by Fornoro and made a charge.

By lap 47, traffic was still a factor as Wood closed on Jedrzejek, running his heart out in and out of traffic. He was looking for his first ISMA win and something else besides.

On lap 48, the 77 skated a bit off turn four and Wood closed the gap to inches. On the last lap, Wood actually got by the leader for a brief time, but Timmy was able to get right back by. As the pair came off four, neither gave. Timmy J had his first win for the car owner who would never see it. Wood, Fornoro, Bell and Cicconi finished up the top five. Fornoro, in Brad Lichty’s 84 for the first time, was pleased with his third place run to top off his brother Drew’s first place in the midget main.

“This is great” said Nokie, choking on his words.. “My son and family are here. My son’s been through a lot and he’s doing excellent. I’d like to thank everyone who sent cards and letters of cheer to my son in his time of Hodgkins Disease and my wife for everything she’s done. I wouldn’t be standing here without her. She’s my backbone. Thanks to Brad Lichty and the whole Patco crew for giving the opportunity to run this car. It’s absolutely a fantastic car. We had a power steering leak and it got hard to steer past the fifteenth lap. But still it’s such a baby carriage of a car and they are such a great team. I’d like to have another opportunity with them. It would have been nice to win with my brother Drew. I think I could have had a chance if I could have steered it, but hey, I’ll take third. We’re in one piece and everybody seems happy. Thanks for everyone coming out and supporting us. Hope we have a safe race tomorrow.