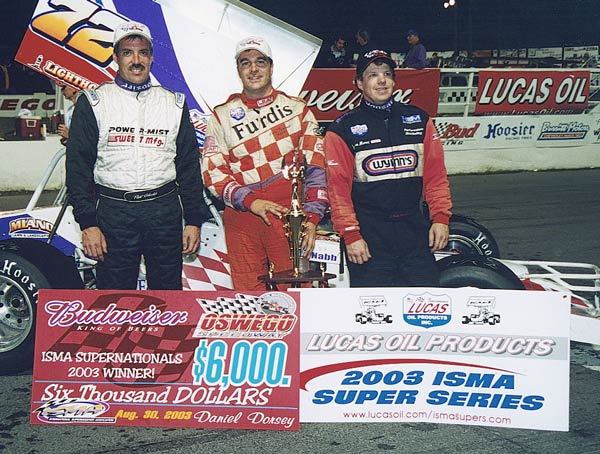 Oswego, NY – Saturday at the Oswego Speedway the 10th annual Budweiser ISMA Super Nationals found Greg Furlong in his first victory lane of the season in the Lucas Oil Super Series. A late race crash eliminated some of the frontrunners including leader Chris Perley, who is a three-time winner of the Isma Super Natoionals since the inception of the event. In the winged midget championship, Joey Payne, Fair Lawn, NJ, drove the Gene Angelillo 45 from 25th to first in a race where the leaders, Randy Cabral and Phil DiMario tangled with two to go. Limited supermodified champion Mike Bond capped off his season with a victory in the 12th annual Budweiser Limited Nationals while Rookie of the Year Bruce Stanton made his first-ever win a sweet one by winning the Super Stock Challenge.

In the headliner of Budweiser Classic Saturday, Greg Furlong started 13th on the field and what looked to be a possible third win of 2003 for current point leader Chris Perley, turned bad for Perley and good for Furlong. When Perley’s rim-riding 11 dove into some lap traffic with just 15 laps to go, Perley’s

day went down the tubes when the 33 of Jen Chesbro spun in front of him. While he stopped and others scattered or hit the wall like Kenny Bell, lady luck turned her back on him for the second time in two days. Perley would have gotten his lead spot back but unfortunately a radiator hose popped off and he had to take the car pitside for repairs, sending him to the rear and others also out of the action like early leader Lou Cicconi and fourth place runner Nokie Fornoro. The duo of Pat Abold and Scott Martel now sat between Furlong and a win. He made quick work of Martel and then headed for Abold. Catching the 26 in traffic, the Hannibal, NY driver stole the lead away and with it the win.

Said Furlong in victory lane, “We knew we had a good car. Those guys unfortunately spun out in front of us. I thought we were faster than the 14 and I thought I was faster than Abold. I showed a wheel to Pat underneath early and he closed the hole. I thought maybe I showed my hand a little too early. So, I waited for lap traffic and I kind of muscled my way in front of him, but I had to do and we got him, we got him. We have been close this year. We lost one to Perley on the last lap. I really wanted to win here. Everyone asked me which I’d rather win, Saturday or Sunday. That’s a tough question. I’ve won on Sunday, but never on Saturday in an ISMA car in front of a home crowd. Now, I can say I’ve done it!”

Storming back up to sixth after his pitstop, Perley described what cost him the win. “The 33 car spun. We just locked it up. We didn’t hit anything. We just stopped. But the radiator hose popped off and we had to come in. We would have gotten our spot back. When it rains it pours. So then there’s only 15 laps left and you get to start in the rear. I got back to sixth. You know everybody says it was good because Woody broke and we gained in the points, but I wanted to win and that’s it. It’s tough when it’s taken away from you.”

It was Aston, PA’s Lou Cicconi who jumped out to the early race lead in the 50 lap ISMA feature and it was just four laps later that Russ Wood flew the yellow after a brush with another car caused hissteering to break. He exited the track, losing a chance to narrow Perley’s point lead margin.

Cicconi pulled away from Nokie Fornoro, in the Lichty 84, on the restart, leaving Pat Abold, Jen Chesbro and Scott Martel in pursuit. Perley was already up to fifth by lap 9 from his 12th starting spot.

Cicconi began picking off slower cars to put that cushion up between his yellow 75 and second place runner Abold. Perley moved into third past Fornoro by lap 18 and he easily looked like the man on the move. And, move he did. With the leaders now contending with heavy traffic, Perley was able to charge under Abold on lap 22 and two laps later he went outside Cicconi in a smooth move out of turn three.

With 30 down and 20 to go, Perley pulled quickly away from the rest of the field as Cicconi, Abold, Formoro, Martel, Furlong, Bentley Warren and Timmy Jedrzejek were hot on his trail.

The fateful moment came on lap 35 when the red flew for a blocked track in turn two after a spinning car set up an unfortunate chain of events down the line. When the action stopped, Ken Bell’s Soule Racing 32 sat in the foam against the wall. Hooked in the melee were Cicconi, Joe Petro, Jen Chesbro, and Bell. Fornoro, after being separated from Cicconi, went pitside under his own power, as did the 97 of Bobby Santos. When the smoke had cleared, everyone had restarted except Bell and Petro.

Abold was now at the point with Scotty Martel right behind. Furlong moved into second moments later and the fight out front began. Perley was able to take the high road around to move up behind Bentley Warren, Timmy Jedrzejek and Randy Ritskes as the clock ticked away. While Furlong was picking off Abold on lap 47, Perley was picking off Ritskes for sixth, but time ran out as Furlong crossed under the checkered with Abold in tow. Martel, Warren and Jedrzejek filled in the top five just ahead of Perley in sixth. Eric Shirey, whose dad Jim had taken a nasty flip in his heat and was at the Oswego Hospital, finished up eighth behind Ritskes as Jamie Letcher and Cicconi topped the first ten.

Abold was content with another second. . “Second again man. You know we’re consistent. We’re just missing that little bit. I think that the team is starting gel and they’re beginning to know what I want. It’s coming. We’re getting closer every time. That’s the best the car has been. The stagger closed up a bit on the tires. I had trouble in traffic because I couldn’t turn in the corners. We’ll get it!”

Martel, in third, commented on his run. “I’m glad it was an exciting race for the fans. I finally got a top three. We had a little motor problem. If it wasn’t for that I think I could have contended for the win. We came back to Oswego on Classic weekend, and kind of concentrated on the ISMA show. Coming home with a top three, I’m glad we did. This a great finish considering our problem, but we’ll go to Star and see what we can do there. I’d like to thank all my crew and sponsors.”

Man of few words, Bentley Warren, added, “The car was excellent. We had a little push, but it was very good. We had a lot of fun.”

Defending Super Nationals champ Timmy Jedrzejek, said later, “This was a recovery race because we did so bad in our heat. We started 16th and the car kept coming and coming. The car was a lot better than it was in the heat race. We may have over adjusted a little bit but it was much improved. We got what we could. When all those cars in the top five got wrecked there, I was just counting them off. So we were able to salvage a fifth place. Not a bad day. Bentley and I had a good battle going there. Hopefully tomorrow we’ll meet each other at the scales again.”

RACE NOTES: Two bad accidents marred the qualifiers. In the Limited Super heats, Dan Ferlito of Oswego took a hard hit into the first turn wall and was taken to Oswego Hospital for a check up. He was reportedly alert and talking with medical personnel in transit. Jim Shirey was injured in a scary crash in the first ISMA supermodified heat. He returned to the speedway late in the evening.

Said the Oberlin, OH veteran driver, “It was just one of those racing deals. I think Dave just tried to get up on the outside of me. I didn’t see him. I got turned and it was a full bore hit. I just had to ride it out. It’s probably one of the worst situations you have in a super when somebody’s trying to get a run on the outside. I broke the fifth rib in two places. My right eye’s screwed up at the moment and a bolt punctured a hole in my elbow down to the bone.”

A moment of silence was taken for a Canadian couple that were severely burned in a camping accident on Friday morning. Taken to a Syracuse hospital, the husband had passed away during the night, while the wife was still in serious condition in the late afternoon Saturday.

Legendary Oswego driver, Eddie Bellinger was in attendance as a spectator and his youngest son Jared was drawn as the winner of the Lucas Oil – Doyle’s Bikes ISMA Haro bike which is given away at each ISMA eventâ€¦Racing action continues Sunday at Oswego Speedway with the 47th Budweiser Int’l. Classic