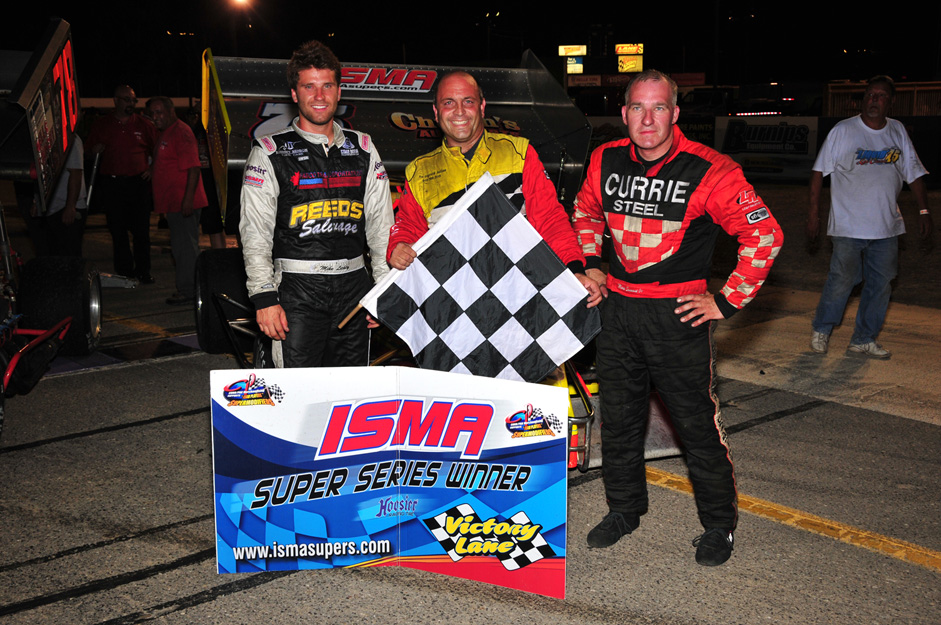 Marne, MI – Supermodified veteran Lou Cicconi, has had a somewhat up and down season with his new team and new car. But he is still in the hunt with three others for an ISMA point championship despite some disappointing finishes. Friday night at Sandusky Speedway, a good run was spoiled by an errant rear end bolt leaving him with an 11th place finish instead of a possible top three. He got redemption the next night at Berlin Raceway when he got the ISMA win however. Lou fought his way past Mark Sammut on lap 30 of the 50 lapper and was unchallenged to the end for his second win of the season and his second at Berlin Raceway. The first came in 2001.

Standing in victory lane just after midnight in Michigan Cicconi said of his race, “I really feel that I was pretty fortunate because the car stayed under me all night. I didn’t expect that Mark Sammut to look like he was slowing down after that yellow. But he raced me clean when I went by – everybody races me clean. I think that’s a good respect thing. Not to take anything away from this win, but I hope our pal in the sprint car recovers from all his burns (referring to a horrendous car fire in the Xtreme sprint heat race). I’ll tell you our crew is doing a really good. At least we got to finish one tonight.”

Mark Sammut too has experienced a season on the roller coaster. He took the lead from Sondi Eden on lap 22, but a lap 28 yellow closed the field up, allowing Cicconi a shot at Sammut and Eden for the front spot. Said the veteran London, Ontario driver, “It was a decent run. We’ve been struggling most of the season so it was good to get back into the top three. We were just a touch too loose. Louie was hooked up better than we were. We struggled all day so to end up second is good. I have to thank Art Currie Ltd. He’s been my biggest sponsor for the last 25 years, and Mobile Striping and Sweeping and Wells Foundry – they all kick in and if it wasn’t for those guys we wouldn’t be here.”

Finishing in third was the current ISMA point leader Mike Lichty. Lichty did double duty at Berlin running Johnny Benson’s Outlaw Late Model in an earlier 60-lapper. Mike commented on his night. “Berlin is a really cool place. It’s a quick racetrack. I have to thank all the fans for coming out. I know there is a lot of racing going on. The outlaw late model race was going decent up until the red. The battery was dead so they pushed me off and then my spotter’s radio was dead so I had no idea where were starting so we missed by about four positions, but fought our way back up. But, hat’s off to Louie on his win. I’d like to thank Patco Transportation and Reed’s Salvage – everybody on the crew. It was a good point night. Louie was definitely hooked up. Hey we’ll take a third.”

Crawfordsville, IN’s Sondi Eden was also doing double duty. After running her Xtreme sprint, she climbed aboard the Joe Gillingham 5 to take her pole spot for the ISMA event. Sondi was quick off the line and took the lead soon to be challenged by Mark Sammut, Timmy Jedrzejek, Cicconi, Lichty, Johnny Benson and Jeff Locke as the race flew by in low 14 second laps.

Eden held her own out front as Sammut tried high and low to get by. He was finally able to take over on lap 22 leaving Eden to contend with Timmy J, Cicconi and the rest of the aforementioned challengers.

Sammut had just put a lap on the last of the field when the yellow flew on lap 27 for the 72 of Danny Shirey. Pulling pitside in the interim was Paul White and Tim Ice. Ice, Cicconi’s teammate, has also struggled this season with some good, some bad. He said later the tire was burned up and the car handling so poorly that he just pulled in.

On the restart of this lap Sammut was able to pull away slightly from Eden but yellow dropped quickly when AJ Lesiecki’s 14 slowed in turn one and was unable to make the pit road.

When the green dropped again, Cicconi seized the advantage and grabbed second from Eden. He then headed for Sammut. Mark went into second on lap 30 when Cicconi dove by in turn two for the lead.

With less than twenty to go, Cicconi pulled away from Sammut who pulled away from Eden but back a slight distance lurked Lichty, Benson, Eddie Witkum, Jeff Locke and more. With five to go the up front order remained the same, but Eden was holding on to her first podium finish in the 5 supermodified for dear life. On lap 47, Lichty edged by the slowing “‘the lady of speed” and on lap 48 she lost one more spot to Johnny Benson.

It was Cicconi, Sammut, Lichty, Benson and Witkum in the top five at the checkered with Eden in sixth.
“

Benson commented on the outcome. “We were extremely loose but I’m sure a lot of guys were. Outside of being loose, that was it. Pretty simple. We were loose the whole race and then Sondi looked like she was going really, really good. At about five to go I saw her getting loose. These cars are hard to handle when they are loose. She hasn’t been in it that long. She did the right thing in just keeping it under control. She slowed up and I was able to get around. It was a good race for her. It was good to see her up front. She might have finished up there.”

Witkum had his second top five in two nights and was more than pleased. “The car was awesome the first ten or twelve laps. I was catching Lichty and Benson there. The yellow came out and we just gained stagger. We got real loose, but we were running consistent. We were running more consistent as the race went on. Who knows maybe another 100 laps, but we didn’t have another 100 laps. Another top five, we’ll take it.”

Eden, who campaigns the Gillingham supermodified when she has the opportunity, was a bit disappointed with missing a chance at a podium finish, but she was realistic about the possible outcome had she pushed her car beyond its capabilities. “I was really excited at first, getting the lead and all that. I knew this track loosens up and said ‘oh, oh, we’re going to be in trouble the second half of the race.’ And, that’s exactly what happened. It starting getting looser and looser. The right rear tire went away. I was trying hard to stay there. I wanted a podium finish for Gillingham Racing. They were working really hard. But the harder I tried, I felt like I might lose it a few times and that’s when I said, don’t crash, lets keep it in one piece. I am just thankful for Route 32 Restorations and Honey Baked Hams for that support us. I’m disappointed, but we’ll take a top ten finish.”

The Johnny Benson Fan Club sponsored the Hard Charger Award at Berlin, which ironically was split by Benson and Eddie Witkum who started one spot apart and finished one spot apart. The John Foss Enterprises Last Car Running award went to Dave McKnight in the Morton 70.