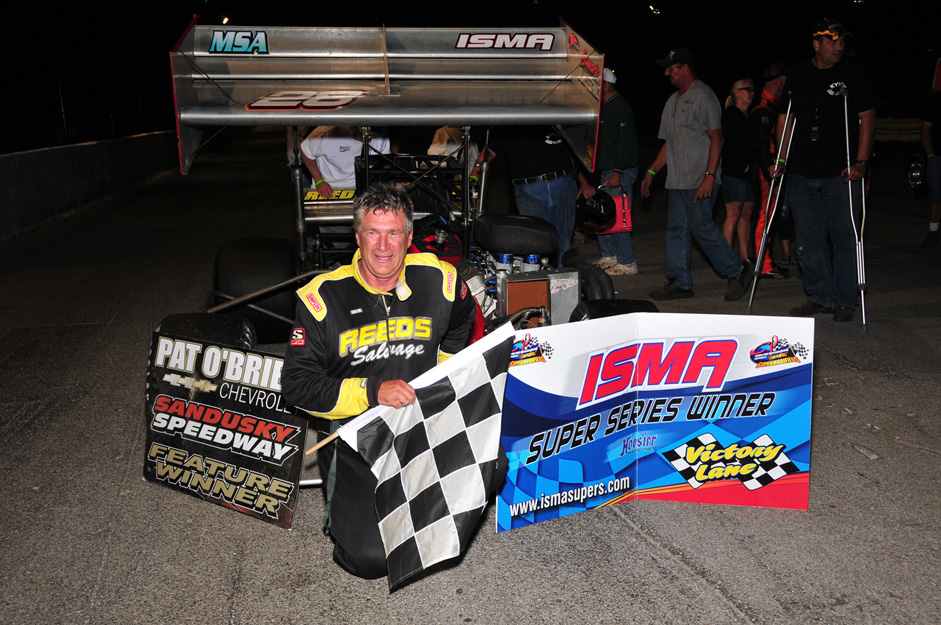 Sandusky, OH – Ohio’s Bob Dawson has been racing a long time and has achieved a lot of things during that long career, but he couldn’t have picked a better time to win his first ISMA race than on Friday night. It was a race dedicated to the memory of his car owner’s father Don Reed and to track owner Kevin Jaycox’ dad Ralph. For Bob the win made up for a less than stellar season thus far. Dawson led from start to finish in the 50-lap main and fended off some serious challenges for the win.

Said an emotionally charged Dawson in victory lane, “This makes up for the rough year we’ve had. It makes up for everything. This win is for the whole Reed family. The whole crew has had a rough year but you know what – this makes up for a lot right here. I had some challenges during the race but they had to come and get it. It was there but they couldn’t do it. We finished third last year. We finished second in an ISMA race. We had some feature wins with MSA last year. But, this one tops all of that and it was on Don Reed Memorial night which is very special. I can’t thank the Reed family enough for what they do for us. This is a big team effort and it’s a big team. This feels good when we’re all out here on the front straightaway like this.”

Finishing in second was another Ohioan Dave Shullick Jr. who was pleased with his run also. “This was a good run. What can I say – ISMA, I love running with them. Every car here is a high caliber car. It’s great racing with them. And, every time they come, I thank them for coming. And, thanks to all the fans who came. We couldn’t do this without you.”

Dawson’s teammate Moe Lilje made a sweet podium photo for the Reed Salvage team having gone backwards from the pole and then fighting back up for a third. Said the Vickery, Ohio driver, “Bob was pretty good. We weren’t quite there. Another third place run tonight for Mr. Reed and the whole Reed Salvage crew. A first and third – that’s what we’re here for. I have to thank the whole Reed family. Tonight was their night for Don. I also have to thank Stewart’s Appliance, Level Performance and TB Eschtruth for their support.”

Lilje and Dawson formed the front row of the 15-car starting field shy Ryan Coniam who had his driveshaft break in the heat. Dawson jumped immediately out front as Jeff Locke passed by Lilje for second.

The race fell into an intense pace, as Dawson was a man on a mission with Locke chasing followed by Lilje, Lou Cicconi, Johnny Benson, Mike Lichty and Mark Sammut. With Lichty, Cicconi and Benson three of the top four in ISMA points, each spot definitely counted.

Misfortune struck Benson on lap 8 however as he stopped on the track leaking fluid around the track. Red was dropped and Benson was done for the night. The second place in points, Timmy Jedrzejek, used the time to make a pit stop to make some adjustments on his ill-handling car which he said later, did not work.

Dawson, Locke, Cicconi, Lichty and Lilje took off on the restart green but Dave Shullick Jr. and Trent Stephens were taken right behind.

Yellow stopped the action on lap 13 and this time it was for another of the front-runners, Stephens who restarted in the rear.

The pace picked up a notch on this green with Dawson, Locke, Cicconi, Lichty and Lilje still the top five. Cicconi, within a few laps, charged by Locke for second bringing Lichty with him. One lap later, ISMA point leader Lichty made a move on Cicconi and the 84 headed for Dawson. On each lap, Mike tried a high move and then a low move, but Dawson had shut down his attempts. Mike tried so hard that on lap 21, he slid high in two and looked to be headed for the wall, but recovered to continue his chase.

At the halfway mark the battle continued up front between Dawson and Lichty with Cicconi holding off Shoe II, as Locke remained in the top five.

The battle out front ended on lap 33 when Lichty came off turn four spinning and sending up a smoke screen. The yellow flew and Mike went to the rear, car intact but position lost. He said later, after finishing fifth. “The car was just getting looser and looser, it was too neutral from the beginning to be honest. We started decent; it rolled the outside grade and then the more laps we put on it looked like everybody kind of ran up the track a little. I was trying to run kind of in the third groove out there to try and get around the outside of people. I don’t know. I just lost it. There aren’t many times that I will spin a race car like that. It just came around on it and it sucks. We had a real good race car. Great job to Bobby and Moe finished third. This one was for Don Reed.”

Dawson now had to contend with Cicconi on his tail as Shullick, Locke, Lilje, Tim Ice and Eddie Witkum Jr. were racing hard behind.

Action stopped again on lap 42, this time for Tim Ice who needed a hook. Ironically, his teammate Cicconi was stopped at the same time and checked for an oil leak. Cicconi was sent pit side with his teammate. A bottom bolt coming out of a new rear end was the demise of the 75.

Dawson had eight laps to victory with a new set of contenders behind him in Shullick and Lilje. Eddie Witkum, Locke and Lichty were still looking for top five spots.

With five to go, Lichty took over that fifth as Dawson pulled slightly away from Shullick for insurance. At the checkered it was three Ohio drivers – Dawson, Shullick and Lilje out front with Witkum and Lichty the top five.

Consistency was the key for Witkum as he said; “We didn’t have anything for them. We just went out, started and stayed the same. Everybody else kind of just crashed. We had a lot of restarts and the car was awesome on the restarts. We could have a few more yellows. Another top five. We’ll take it. I’ve got to thank the sponsors Reader Electric, Lee Vinal Excavating, Harrington Paving, Scot’s Auto Clinic and Dr Mom Says School is Cool for all their help.”