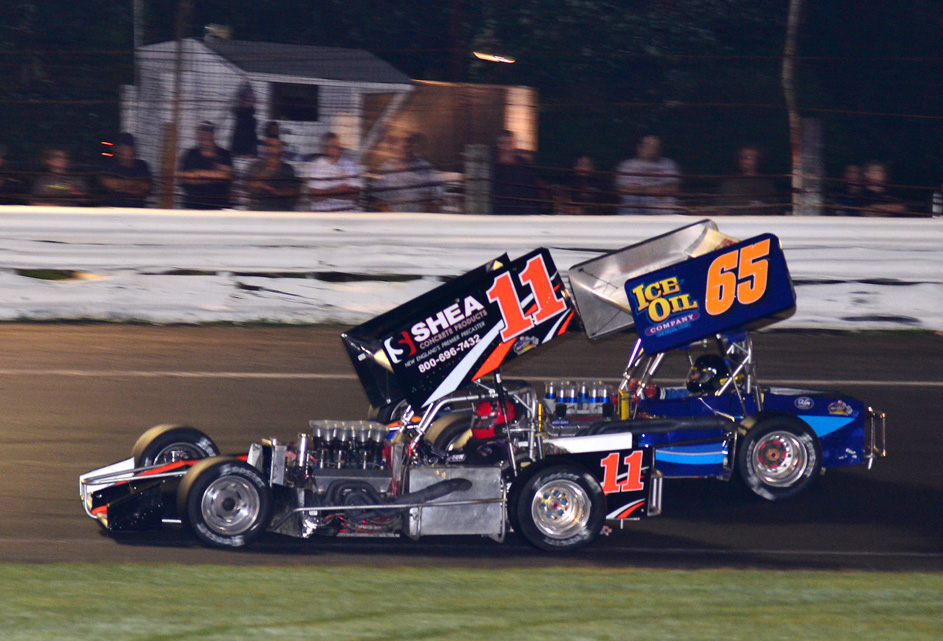 Waterford, CT – It had been a roller-coaster ride for Rob Summers after stepping into the Vic Miller 11 ride vacated by Chris Perley earlier this season – up until Saturday. Bad luck plagued him at almost every corner and with the passing of longtime Miller crewman Mike Woodworth this past week, Rob wanted nothing better than to do well at Waterford Speedbowl, a place he’d won at many times before in different divisions. Starting third in the 50-lapper, Summers took the lead from Jeff Locke on lap 18, praying to the end that nothing else would happen. Only one yellow slowed the race, which took approximately 14 minutes to complete. The Vernon, CT driver wanted this win so badly he didn’t feel confident that it would happen until the double checkers fell for him.

“Tonight was a big night. We’ve had a rough year and we lost a valuable longtime crewman Mike Woodworth. He passed away earlier this week. He was just a great guy. This was just an emotional win for everybody. We needed this big time. This was definitely for Mikey.

“The car was great. We started up front and the car was on rails. Tonight was our night. The car was good on the outside. It was all good. The pass for the lead came early but I was just thinking ‘man I hope nothing happens, that nothing breaks or falls off’ with the way things have been going. After a year like we’ve had you just stress out like that. When I saw two to go and then one to go, I was just the happiest guy in the world.

“Winning here in a super is just huge. I consider this my home track. To turn our luck around here of all places and with what happened with Mikey is huge. We’ve had a fast car and have had unbelievable things happen that have never happened to this car. To step into this car and have one thing after another happen – – it’s just good to get a win. We led this first race here and tangled with a lap car with two laps to go. We went to Ohio and ran out of fuel. We got caught up in a wreck at Delaware. We’ve been good. We just haven’t been able to close the deal. This team deserved this. They have been working their butts off. They are used to winning and they are used to running good. So, this just means a lot to win for those guys.

Friday’s Lee USA winner McKennedy, who would have missed the Waterford show had not Seekonk’s Valenti MRS race been called off earlier in the day, was happy with second. “It was a good night. We started mid-pack and we got a second. I wish we had a little bit longer of a race – 50 laps goes by pretty quick so we ended up in second. Congratulations to Robbie Summers. It’s cool to see him win. He’s a good friend and he has a good team over there. It was a good weekend. We won last night and ended up second tonight.”

Tim Ice, who lost his second place to McKennedy on that last circuit, was happy with third considering the tire wear he’d experienced. Said the Iceman, “It was a really good run. The car was real good. I was beside him there at the start and could stay with him. I knew I had something pretty good when you can do that. The last twenty laps or so I started getting tighter and tighter. I have the right front blistered off. It’s a wonder it has any air left in it. I slowed down to try to do the best we could do and that’s what happened. We’re excited.”

After some accident attrition after Lee and with the threat of more rain possible, four cars did not make the Saturday event. Two uneventful heats were won by Jeff Locke and Lou Cicconi. Only a spin by Mark Sammut slowed the qualifiers

Cicconi’s luck turned sour at the start of the feature however and he would also bring out the only caution of the race at the mid-way mark. Lou’s 75 stopped as the field was doing their warm-up laps prior to green. He got back in the action only to fly the yellow again later just averting a bout with the wall. He said after the race, “I was running slow half throttle laps and the bolt broke on the rear suspension that holds torsion bar up. They were nice enough to hold the race up and let me fix it. I went back out and the car was still really good. I was running hard and I got on the brakes in the corner and my front suspension just folded up because I was on the brakes too hard. I thought I was going to hit the fence.”

At the start of the race, outside polesitter Jeff Locke took up the early lead and quickly distanced himself from Dave Duggan, Summers, Ice and the rest of the pack.

Summers was a man on a mission, moving into second before the counter clicked to ten. He hunted down the high- flying Locke and passed by on lap 18 for the lead. Then the worrying began. The fact that this team and car had won four of the 12 races held at Waterford did not allay his fears. But for the next seven laps he was untouchable out front putting some cars a lap down for cushion before the yellow flag flew.

The lone caution for Cicconi came on lap 25 and Lou’s 75 was hooked off the track.

Rob now had Tim Ice, Locke, Mike Lichty and Eddie Witkum Jr. hot on his tail on the restart as the two lap cars opted to go to the rear. But Summers pulled away bringing only Ice with him. Locke, Lichty, Witkum, Russ Wood and Dave Duggan raced each other in some breathtaking action while Jon McKennedy threaded his way toward the front passing a car or two a lap as the race wore down.

With five to go Summers still was holding his breath while Ice contended with Locke as McKennedy snuck up on both. Jon was in third when the two-to-go flashed and in second when the checkered fell for Summers, giving him his third ISMA feature win. Ice finished third with Jeff Locke and Mike Lichty finishing up the top five.

Locke commented about his finish, “We needed a good run as a team. We struggled at Lee and the last few races. We just needed a good solid finish… something to show our potential. I have to thank Richard Witkum who couldn’t make it here tonight. And, my father Kenny Locke who just gives us what we need to run good. It’s just awesome. Our condolences are with the family of Mike Woodworth. Our hearts are heavy that ISMA has lost a good man. We’re all thinking of him. This and the last race have been for him.”

Lichty, who had lost the ISMA point lead after a dismal Lee run, was content with fifth. “This was much better than last night. One thing I can say is that I’m extremely glad that they changed the handicapping procedure back to where it was because it was good racing when it was there. And, this place always puts on a good show. We tried the setup that we used when we won two years ago. We tried that during the day. We ran out of time and couldn’t get to practice the car. We ran the heat race and were way too tight. So then we changed it totally 180 degrees back to what we’ve been running. The car started out pretty decent. We passed a couple cars on the outside there and then the car just tightened up for some reason. We couldn’t make any more headway. I thought we had Locke there on the restart and then McKennedy got by me with a couple to go. I saw he ended up second. I guess it was a good points night unlike last night at the famous Lee Speedway where we had bad luck there three times when I was running for the championship last time. I’m looking forward to the next four or five shows. I think we’ll be running real good there.”

ISMA heads to Sandusky and Berlin (MI) Raceway Friday and Saturday, August 24 and 25 and then to Oswego’s Classic weekend Super Nationals 60.