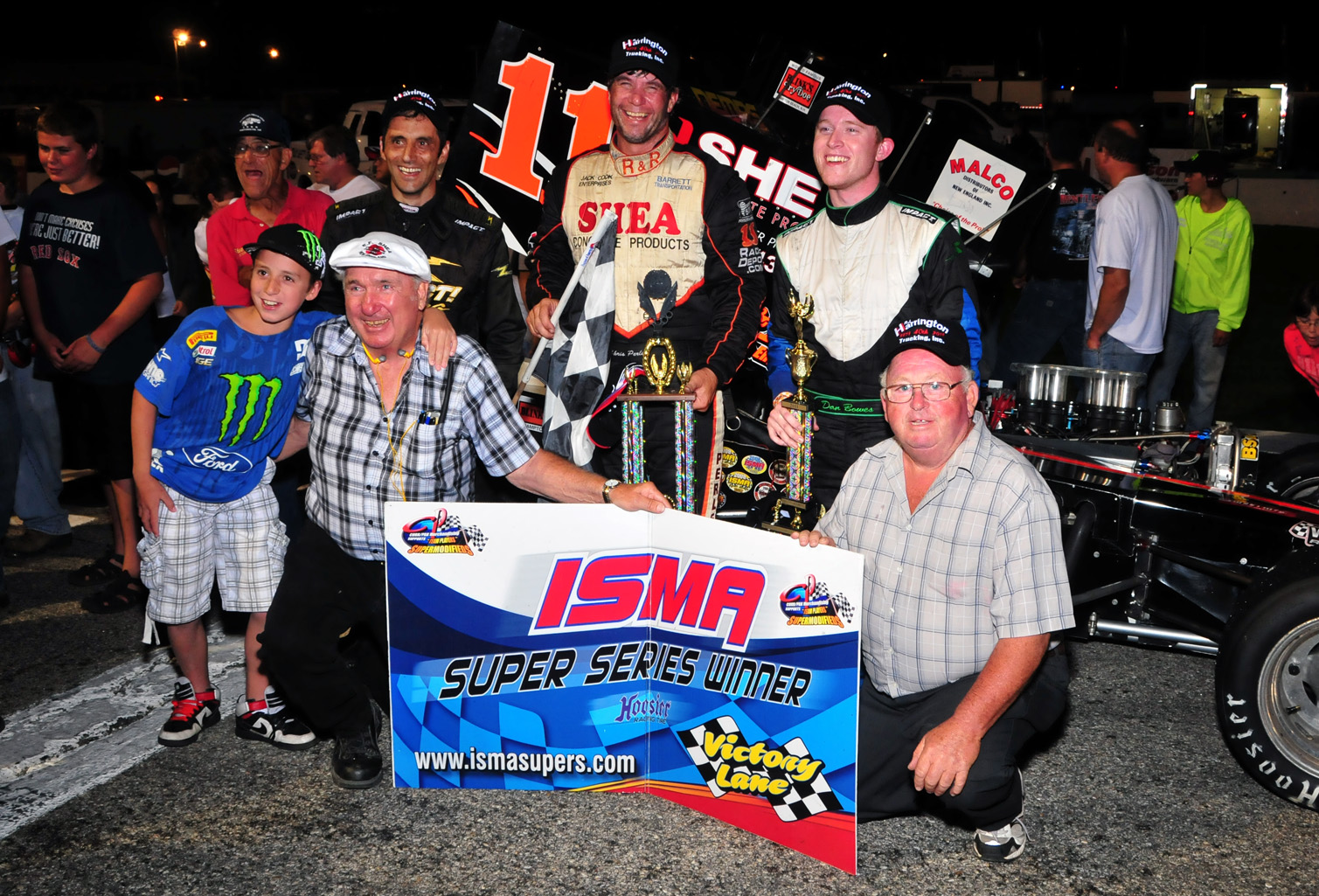 Lee, NH – Nothing, even an early rain, hampered Chris Perley’s race Friday night as he worked toward a second straight Ollie Silva Memorial win. It was his sixth ISMA victory at the Lee USA oval since ISMA racing began at the New Hampshire oval in 1988. Starting twelfth in the field, Perley had a long road ahead, especially with early leader and 3-time Lee winner Russ Wood out front at the start.
Wood, who unexpectedly broke a rocker arm while leading, gave way to Jeff Locke and Locke in turn yielded the point to 2009 Lee 350 champ Dan Bowes. Bowes would provide Perley with his last challenge. From lap 48 to lap 72, the Rowley Rocket chased Bowes, a ten-feature small block winner at Lee, but a rookie with ISMA, through, down and around traffic. As Bowes approached yet another lap car with less than 5 to go, Perley put the Vic Miller 11 under the 18 off turn four and was the leader of lap 73, going on for the win. The race went green to checker in a time of 17.58 minutes, with low 13-second laps the norm. 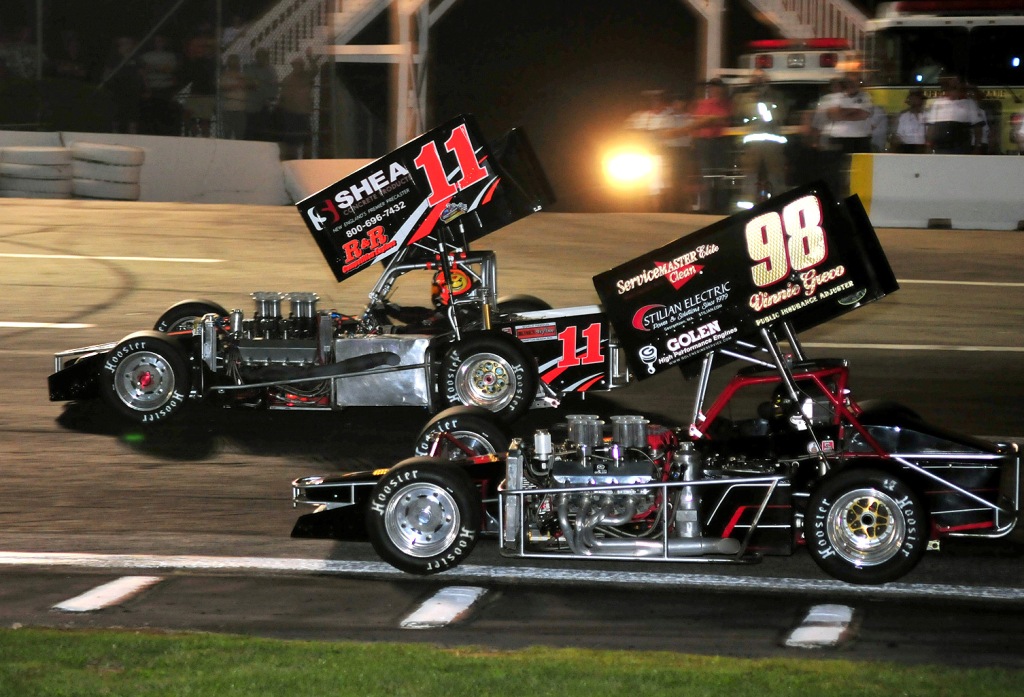 Said Perley in victory lane, “They put some coke down on the track and that’s what gave us an outside groove. People could run inside and out. I could run everywhere. My car was so tight. I saw Danny out there running for everything he had. I couldn’t gain on him. I was hoping we would get to lapped traffic to help even us out a little bit. I wasn’t even sure if I was second, third, or fourth. I had no clue. We just ran. That’s all we could do. It was fun coming here. It always is. It’s always nice coming to a hometown track and putting on a show. I hope we put on one tonight.”

He continued in regard to winning the legendary Ollie Silva’s memorial race. “I’m old enough to know of Ollie, and I’m too young to have raced against him, but I hear all the stories. You never hear anything bad about the guy. He was a legend. To win a race dedicated to him – to win the whole package here tonight – you just can’t beat it. Ed Shea is here tonight and we couldn’t do anything without him. My R&R motors are great. Nothing stops them. Vic builds a great car and it comes with a great crew. I have great sponsors – New England Motor Racing Supply, Perley’s Marina, Malco Products, Barrett’s Transportation and Blink’s Fry Doe. My family is here tonight. It’s all awesome. You just can’t beat it.”

Runner-up Dan Bowes of Bayfield, Mass., was proud to finish within sight of Perley at race end. “This is a tough track to drive especially with all the horsepower. I was working good on the outside, but I knew Chris was coming. He’s always fast. I knew I just had to try and keep traction in the turns. That was my main goal all night. I never really had to work hard to pass anybody. For the most part everybody slipped up and I was able to get by. I almost got in trouble with Jamie Timmons high there in three and four. It wasn’t his fault. It was bad timing. My front bumper got hooked with his rear bumper. I couldn’t get away. I thought for sure Chris would have gotten by me then. But he didn’t then, anyway. I just didn’t have enough at the end and I knew he was coming. I tried not to spin the tires. This second isn’t bad. If I had to lose to somebody here, it’s got to be Chris. It’s nice to see such a good crowd here tonight despite the weather. It’s awesome.”

Third place finisher Justin Belfiore had a couple lap cars between his 98 and the top two, but settled for this finish. “The car actually started out a bit loose. I just tried to take my time and to not burn up the tires. It worked out. I was the third fastest car of this crew. It was awesome to run up through the field with Chris and Dan. All these guys ran a good race tonight – nonstop. It was just good racing and I love racing like this. Thanks to all the fans for coming out tonight. It’s nice that you could make it. And, I’m glad you got to see a good race.”

Despite foreboding skies, storm threats all around and an early shower, Lee USA’s Ollie Silva Memorial got off without a hitch. Russ Wood and Jon McKennedy, in the Lane 9, paced the 20-car field, but before the white fell, McKennedy pulled the 9 pit side and out of the race with mechanical ills. Rob Summers pulled into his spot and green fell. The race assumed a rapid flow with Wood and Summers out front of Eddie Witkum Jr, Jeff Locke, Mike Lichty and Timmy Jedrzejek.

It didn’t take long for Locke to move up to third and by Summers on lap 8. The Wood-Locke duo would begin a twenty-plus lap domination of the front two spots, quickly threading through tail-end traffic on the small one-third mile bullring. A Summers-Dan Bowes, Witkum, Lichty, Perley, Belfiore battle was ensuing behind, with Bowes taking Summers on lap 23 in traffic.

On lap 29, Locke pulled by Wood on the backstretch to take the lead. On lap 31, Wood pulled suddenly to the pits, out of second. A broken rocker arm was deemed his demise.

Locke now was able to pull away from Bowes who had Perley a distance behind him. Summers and Belfiore swapped positions just before lap 40 as Witkum, Lichty and Mark Sammut raced hot and heavy in the top eight.

Bowes gradually reeled in Locke who got stuck behind a couple lap cars for a number of laps. This gave Perley and Belfiore the chance to close up on the lead duo. On lap 46, Bowes watched as Locke was still trying to get by the 51 of Duggan and when the time came, Bowes pounced, taking the lead in turn 1 of lap 48. Three laps later, Perley was by Locke and the chase for the lead began, now with two different players. Behind them were Belfiore, Locke and Sammut.

With 15 to go, Bowes’ aforementioned miscue with Jamie Timmons came, but he recovered and Perley remained in second. As lap cars intermingled with the top ten behind, fighting for position was intense, especially between Summers. Lichty, Ben Seitz and Joey Scanlon all in the top eight.

Perley finally seized an opportunity to get by Bowes, getting under him in lap 72 and coming out with the lead on lap 73. Bowes stayed a close second as the checkered flew. Two lap cars separated one and two from third place runner Belfiore. Mark Sammut had a one-car cushion over fifth place Jeff Locke.

Sammut, obviously putting a bad crash at Sandusky at the end of July well behind him, was pleased with fourth. “We were decent. We started eighth by the time the race started. We were a little tight at the start. About lap 15 or 20 the car came in pretty decent. About lap 45, it started to tighten up real bad again. If we had gotten a yellow we might have been in good shape. Hey, we finished fourth on a tough track. Considering where we started, I’ll take it. It was good to see the race go green and nobody got wrecked. You have to like that. So, we’ll put it all together again and hope for the best next time.”

And Locke, who also came away from that Sandusky event with his car in a bad shape, welcomed the fifth place finish. “It was a good run. The car was probably too good, too early. We just got loose. I didn’t have enough to do anything toward the end. For the last 20 laps we just hung on. Going all green actually helped. It spread out the field and when I got loose, I had some track position. I think a caution would have hurt me. Although it might have helped in one aspect. I couldn’t get to my tear offs on my visor and I couldn’t see all that well toward the end of the race. I have to thank Richard Witkum, my crew and my father for giving us good equipment. We’ve had a rough year. So I’m really, really happy to come out of here with a fifth place finish. The car is in one piece. It feels good. We just have to get it a little bit better at the end of the races then we’ll be in good shape.”