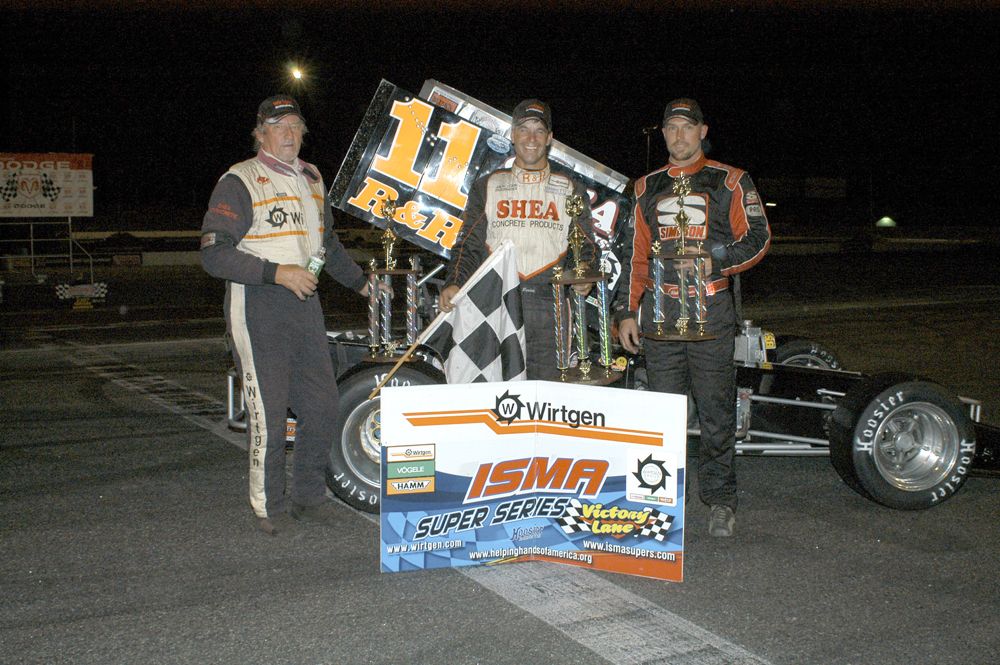 Oxford, Maine – Saturday night’s drive for the checkered for Chris Perley was like any other of late except this ninth win of the ISMA-Wirtgen season also placed him atop the ISMA All-Time feature win list passing Bentley Warren and Russ Wood who held the one-two spots until recently. At Oxford Plains Speedway, ironically, Perley had to pass the legendary Warren driving one of the cars that has brought the Rowley driver to that pinnacle. Warren took the lead in the Oxford Maine Classic on lap 14 but lost it to Perley on lap 21restart for a 3-car tangle happened right in front of both the Vic Miller machines. Perley is still amazing himself at what he has done since the start of last season.

“I was out there knowing that I had the old car and that Bentley had the newer car,” said Chris. “And, you know something, old things just don’t go away. I figured I was going to be out there racing against Bentley instead of myself. I just wanted the lead and I figured if anybody was going to go by me I was going to make him work for it. I can’t believe we took the lead in the ISMA All-Time feature wins list. To be in that company is just amazing. I just want to say hats off to all the crew because this car is awesome. Anybody can see it. It’s a blast to drive and I can’t believe I just keep ending up here in victory lane.”

And, he paused after almost wrecking his 11 in a post-race attempt at a donut as an errant super was heading back to the pits, to thank all those people who have helped bring him to this level. “I have awesome motors by R&R Competition Engines. Ed Shea Concrete has helped us so much with the engine program and all the way through the car. We have Perley’s Marina and Blink’s Fry Doe now, New England Motor Racing Supply, Barrett’s Transportation, Cook’s Enterprises and a whole bunch of people that back me in each and every race. I just want to say thanks to all my sponsors and to all the fans that hung around to watch. I hope we gave you something to watch tonight.”

The sage Bentley Warren smiled broadly after his run and as he listened to the crowd applause which accompanies his every race achievement. “This was fun,” said the man of few words. “I had a good time. The car ran wicked good. I tried to stay out front but Chris just goes too fast. He’s just so good.”

Robbie Summers brought the Lane 97 home for a podium finish at Oxford after a fifth place at Lee. It was tough going through the traffic after an early pit stop. “We had some problems there at the beginning and had to pit. The car started to come on and we worked back up from the rear to battle by Sammut and Lichty for fourth. That probably would have been it had Vern not pulled out late in the race. Thanks again to Howie and the crew for their hard work.”

After three qualifying heats won by Justin Belfiore, Dave Trytek and Perley, Mike Keeler and Vern Romanoski sat on the front row for the 75-lap main. Romanoski, from Strong, Maine, was determined to put on a show for his friends, family and fans in attendance. Unfortunately in a scene from at Lee, only one lap was in the books before caution flew. This time a nasty accident took place when Dave McKnight caught a wheel coming out of turn four, sending him hard into the front straight concrete. Dave was shaken after the hit and was transported to a LewistonHospital for a thorough checkup.

After the red Romanoski took up the lead and began to pull away only to have the yellow fly on lap 6 for a spin by Bob Timmons’ 31. Brandon Bellinger went pit side on this one.

Back underway; Vern soon had Kennebunkport’s Bentley Warren breathing down his neck. The two Maine residents took charge out front as Romanoski held off the 71 with Scotty Martel, Jon Gambuti and Perley third through fifth. Mike Keeler’s 56 brought out the yellow on lap 11 to slow the action. The 10 of Mikey Ordway swung into the pits at his crew’s request and then re=entered the fray.

This yellow was Romanoski’s demise as the 66-year old Warren drove past on the outside in the backstretch to take over the lead on lap 14. Bentley only was out front two laps before the 56 brushed the back straight wall hard, with yellow flying. He was able to continue and this time Robbie Summers used the time to pit quickly.

As Bentley held a solid lead with Romanoski right behind, eyes were on the “other” black and orange car of Perley who had methodically worked up to third. Perley worked Vern high and low for a couple laps and then made his move. The powerful front duo of Warren and Perley didn’t have much time to pull away as a three-car pileup occurred right as the 71 and 11 approached to lap on the fast 3/8ths. Jamie Timmons, Bob Timmons and Keeler were involved.

Perley had the “old man” in his sites on the restart and punched it out of two to take the lead. Justin Belfiore’s 8 also used the restart to take third from Romanoski.

Perley, as has been the norm, set the car on cruise and pulled away from teammate Warren as Belfiore, Romanoski and Scotty Martel stayed top five trailed by Mark Sammut, Mikey Ordway Jr and Mike Lichty. Two more yellows flew for spins on laps 24 and 26 by Timmons and Keeler. Keeler was called pit side for his third encounter.

The slowdown allowed Bentley and Belfiore to close the gap on Perley and away they went weaving through some tough traffic with finesse. Belfiore was on fire and on lap 34 he charged by Bentley and had only the 11 in his way to a potential win. Unfortunately for Justin, the 8’s motor blew big time on lap 36 and red was called for cleanup and a refueling.

Romanoski had his third place back and Bentley his second place but now a long green stretch found the dynamic duo leaving the country as they dove in and out of some pretty scary traffic. Romanoski kept them in sight but the battle was now between Mark Sammut. Robbie Summers and Lichty as they were three wide at times all going for fourth. When Summers and Sammut finally claimed their real estate, Scotty Martel, Mike Lichty and Mike Ordway Jr were the next trio to watch as the laps ticked away.

With ten to go it was evident that nothing was stopping the front two except another yellow. It came on lap 72 when Larry Lehnert drove off the track in three and came back on in four. As the lineup was sorting out for the final laps, Vern Romanoski’s 5 slowed suddenly and entered the pits in a heartbreaking conclusion to what would have been his best and probably proudest race to date. Vern recapped the end of his race; “I went down underneath the 14 and got up beside him going into three and four. The 24 was straight ahead of me. I was going to swing in and then swing out and pass him on the outside going into one and two. I believe he said he lost his collector off the exhaust and I ran over it. It got my left front tire, my fuel line and an oil line. We had four laps to go. It would have been nice to finish behind Perley and the legend Bentley. I run one of Bentley’s old numbers, the 5, and it would have been a great finish for me in Maine in front of the people who support me and came out to see me tonight.”

With lap cars scattered throughout the running order, Perley and Warren were divided by one or two cars on the restart while Summers, Sammut and Lichty were the top five. Sammut ended his best New England run saying, “The car was awful all day. The only race it was even close was the feature. It was great really for where we came from. We started fourteenth and ended up fourth. We could have had third but Summers was a little stronger than we were at the end. All in all this was a great weekend. We’ll take that anytime. Hopefully we’ll keep plugging away in the points and see what happens.”

For Lichty standing in the pits next to his teammates mangled 94, it was a bittersweet fifth. One car is in one piece. It was unfortunate for my teammate Dave. It happened right in front of me. It was a hard impact and I just hope everything is all right with him. We just missed the setup another night. These are two of my worst tracks – Lee and Oxford. I don’t have any enjoyment coming up to these places. But, my car is in one piece and I think we gained a little more on Ordway in points. We’ll just have to keep it up.”

ISMA is off until Oswego’s Super Nationals on Friday, Aug. 31 and to the All-Star Speedway Classic featuring a new split 150-lap format with 75 laps each segment.