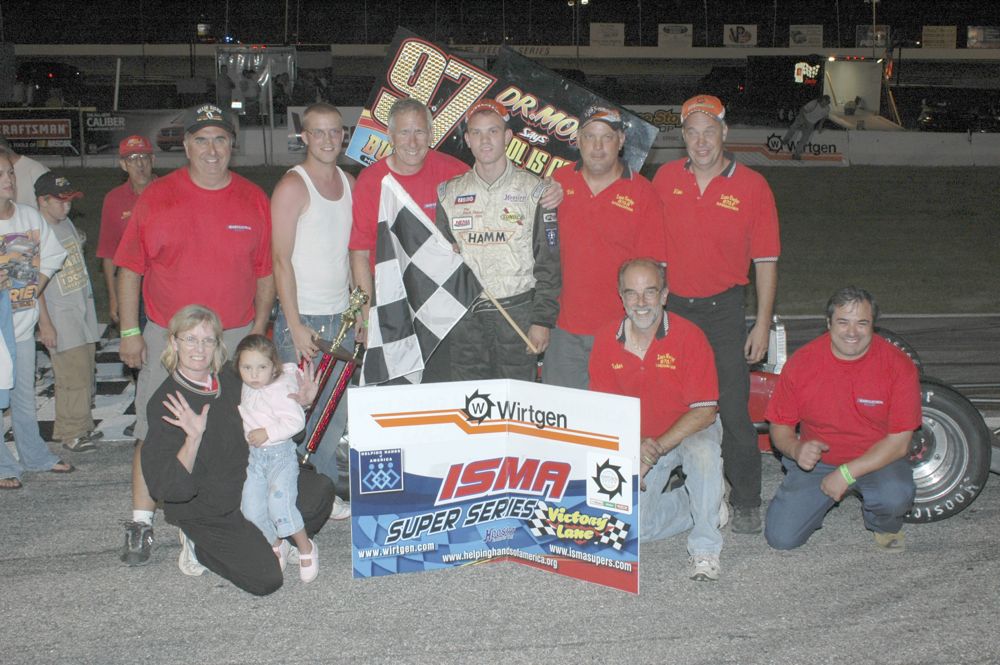 Lee, NH – Twenty-year old Bobby Santos pulled off an amazing feat at Stafford Speedway on Tuesday night by taking both open wheel features for a bonus of $50,000. What does this Franklin, Mass. driver do for an encore? He beats some of ISMA’s best including the hot streaking Chris Perley. On Friday night at Lee USA Speedway he pulled into victory lane for his third career-win in his short ISMA career. Santos, starting seventh in the 24-car field, snuck up on battling race leaders Scott Martel and Chris Perley, and stole the front spot from both of them with five laps to go. As Martel and Perley were playing cat and mouse with some lap cars, Santos took the Howie Lane 97 under both of them for the lead in turn two. Perley chased Santos for the five remaining laps, but couldn’t catch him. Santos had been stealing away with wins this week and the Rowley Rocket wasn’t going to stop him this night.

Said the quiet young driver in victory lane “It was a great night. It was a lot of fun racing with those guys. Scotty did an awesome job. It was his race but the lap traffic played in my favor. To be able to beat Chris is just unbelievable because he is the best right now. To steal one from Chris right now is like amazing. I’ll take one. It’s been a good week. It’s been a good year.”

Perley, who admitted earlier that he’d settle for a good finish at the tough New Hampshire bullring, was ecstatic with his finish. To get a second at Lee. It can’t beat that with a stick! It was a good race for the fans. I was trying not to get sideways through the whole thing. I was tight on top and loose on bottom. It was a good race. Bobby did a great job. Martel and I were battling for a long time. I think I used up a lot of my tires. I was battling with Nokie and Louie. And the caution would come out and I’d be back behind them. Whatever. It was a great run and a great battle.”

Lou Cicconi, off a win at Mansfield on August 11, made the 75-lap affair even more exciting by taking third from Martel on the last lap. “It was a good race. I can’t believe it. I got third. I caught Scotty napping there at the end. I passed him in the last lap in the last quarter. I did good.”

A large crowd was on hand to see the battle of the titans of ISMA and a battle they got. Oswego’s Bob Magner was the polesitter and he took command right away trailed by Robbie Summers in the Lane 9, and Justin Belfiore, one of the 2006 feature winners. Just behind mixing it up were Dave Trytek, Scott Martel, Nokie Fornoro, Lou Cicconi and Joe Petro.

By lap eight the top four cars which now included Martel, began meandering their way through slower cars on the three-eighths mile. By lap twenty, Magner had pulled away from the pack somewhat and had a lap car-cushion when the first yellow fell for a hard hit by Johnny Payne. Several cars headed to the pits in the cleanup including Jamie Timmons, Dave McKnight, Mike Lichty and Vern Romanoski. Payne and Timmons remained pitside on the green.

The field bunched behind Magner but he was able to stay the course with two more minor yellows falling in laps 24 and 26 for a spinning Brent Roundy. On the next green positions behind Magner began to change as Scott Martel put the Budnick 88 into third behind Belfiore and second on lap 30. Belfiore, Summers, and Fornoro now had Chris Perley breathing down their necks, something they had experienced all season. Cicconi, Bob Santos, Joe Petro, Russ Wood in the Martel 14 and Ricky Wentworth ran closely behind.

Martel, in front of friends and family, had the winning desire and on lap 37, he passed by Magner off turn four as Magner’s teammate Shawn Muldoon (35) slowed the front-runners for a moment. Magner, however, did not lose sight of Martel as lap traffic began to play. Chris Perley was high and low as all eyes watched the Miller 11 move up. By lap 43 he was second and headed for his close friend Martel.

It now became a friendly battle for the lead as Perley, who said earlier, Lee was one tough track to win at, tacked to Martel’s rear. On lap 47, Mike Lichty slowed suddenly and headed to the infield with Martel and Perley getting on the binders a bit. Perley actually got by Martel here, but settled back into second as Lichty moved toward the pit in front of him.

With twenty to go, the 88 and 11 had fans on the edge of their seats as Magner, held off Santos, Cicconi, Fornoro, Summers and Russ Wood. Wood, however, stopped suddenly off four bringing out the yellow. He said later the 14 just shut down unfortunately as he was just beginning to move forward.

Martel was able to stay ahead of Perley on the green, but it was Santos on the move now as he went by Magner to take third. Lou Cicconi put the 75 by Magner a few laps later as the chase to the finish heated up. Belfiore, Fornoro, Summers and Petro were still running strong behind.

Perley pressured Martel with all he had with a loose and tight car as aforementioned. On lap 69, the crowd screamed as Santos dove under Perley who almost was sideways as the leaders approached a lap car. In one fell swoop, the Franklin Flyer was in the lead passing Martel as cheers erupted from the bleachers. The checkered flags flew for Santos as they boys were still racing behind. Perley drove over for second while Lou Cicconi made a last ditch attempt and stole third from Martel. Magner finished a fine run behind Scott for fifth.

The mood in the Budnick trailer showed a little disappointment at having just missed another one. Said Martel of Bradford, MA, “Tbe most frustrating part is racing here in front of so many family and friends and to come up short again. It’s really, really frustrating. With a little more cooperation from lap cars we would have had this one in the bag. Bruce and I are really jelling. All our sponsors that help us out we appreciate it.” And then Scott, smiling, made a prediction, “We’re going to win the Star Classic.”

Magner, who held is own among the big dogs, was all smiles. “I’m happy that we all finished. I shared the fifth place with Dave and Shawn. I’m glad that we are all going to roll on the trailer because it’s too much work when we don’t. To lead was nice. I was just trying to be smooth. Those guys are going to go by. They’ve been doing this for a while. I got real loose. If it were a thirty lap race I probably would have won it.”

Notes…. Prior to the ISMA feature a long line of Harleys traversed the Lee USA Speedway with Bentley Warren near the front. Bentley and friends were raising money for a young girl Megan with a brain tumor who needs an operation and doesn’t have the funds…. The group received a warm welcome…The unclaimed ISMA Iron Horse bike sponsored by Perley’s Marina Repair, also went to Megan…Next up is the ISMA-Wirtgen Super Nationals of Bud Classic weekend on Sept. 2.