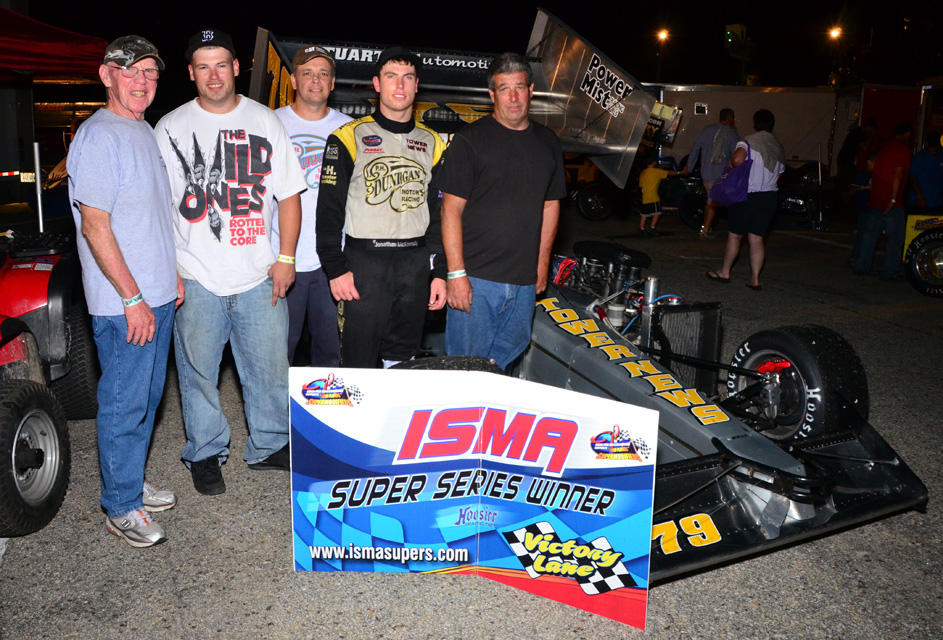 Lee, NH – After getting totally washed out by rain on August 10 at Lee USA Speedway, the International SuperModified group came back to try again on August 17 and almost lost another one to weather once again. But this time thanks to a rearranging of the schedule by Lee officials, the Ollie Silva Memorial event was completed. Chelmsford, Mass. driver Jon McKennedy driving the Dunigan 79, started outside pole, pulled quickly away from the field and never let up to win his career-first ISMA event beating out the imminent showers.

Although victory lane ceremonies were shelved in order to get the rest of the program completed, the pit area sufficed for photos and interviews. McKennedy commented after the win, “We had a really good car tonight. First I want to thank all the crew. They worked really hard today. Going into the race I felt really confident. We had a good car during practice, even on really old tires the car was balanced pretty good still really fast which is a tough thing to do here. There’s not much grip out there so that’s what I focused on all day to give the car good drivability and a good setup for tire wear. That’s what we ran and it worked. We led the whole race which is awesome. I want to give special thanks to Paul and Helen Dunigan for letting me run this car. It’s awesome. They have been awesome to me and I’m glad I can get them a win and put the name back in the series up on top. It just feels really good.”

Trailing McKennedy’s 79 for much of the swift race which saw only two yellows, was Johnny Benson Jr. in his first outing at the New Hampshire bullring. He said later, “Brad (Lichty) said that they have struggled here but I thought our car was pretty decent tonight. We were a second place car. We got into the fence on the backstretch there running for third and it toed the car out a little bit. I didn’t have anything for the Jon anyway. His car was really good.”

Benson and third place finisher Eddie Witkum Jr. had a good battle going for second place and the driver of the 97 was pleased to end up third despite a potential second had a couple things gone his way. He described his race as light rain fell, “We had a real good start with the redraw and that helped out.  But the car was really good, especially in the beginning. We fought real loose all day long and we couldn’t seem to get it tight enough. But come race time it tightened itself up and I don’t know why. Howie and the crew did a good job making the right decisions all day long. We just stayed with it and came out of here with a decent finish. As bad as everybody was we were actually ahead of a lot of people as far as being loose. There were a couple hairy moments out there. The rain on one end of the racetrack was hurting me and at the other end I was just loose. It was a good race all in all. I thought I was going to have Benson there at the end and a few other times but he got me in traffic.  I don’t think he would have had it not been for the traffic. But, that’s racing.”

After three heats won by Timmy Jedrzejek, Rob Summers and Jon McKennedy, the redraw of the top twelve put the 84 and 79 on the front row, but the Lichty car had to start at the rear because driver Mike Lichty had just arrived from the airport. Mike Ordway Jr. had qualified the car and drew pole with the possibility of Lichty not making it from Boston. When Lichty arrived, he took over his ride, which now started last.

With rain looming in the near future, the 75 lapper got underway rapidly and McKennedy took off like a bullet leaving Witkum, Benson, Jon Gambuti and Lou Cicconi slightly behind.

The race ran quickly and with no cautions, McKennedy was lapping cars by lap 19 as Witkum, Benson, Gambuti, Cicconi and Tim Ice trailed. McKennedy had a commanding lead when the first yellow flew for Mark Sammut’s 78 which had a tire going down on lap 46. Sammut was able to make the change and restart tail.

McKennedy was pressured by Benson on the restart but a couple lap cars dotted the top ten as Witkum, Cicconi, Ice, Gambuti, Summers, Russ Wood and Mike Ordway Sr. tried to gain positions.

On lap 51, the second and final yellow flew for the 27 of Jamie Timmons who hit hard on the pitside of the front stretch. The car was flatbedded off the speedway as the skies lit up with lightening and thunder rumbled. Sprinkles were evident but not enough to stop racing as McKennedy was off and running once more distancing himself from Benson, Witkum, Cicconi and Ice.

A planned memorial to Mike Woodworth, a long time Vic Miller 11 crew member, who had passed away during the week, was not to be as was the victory lane ceremonies as the field was told to exit the track immediately after the double checkers flew for McKennedy. Benson, Witkum, Cicconi and Ice crossed under in the top five.

Said Cicconi from his hauler, “I think we did good honestly. I don’t really think that the guys that finished ahead of me were that much better. And I’m happy with fourth. I know it was raining while we were racing. There are so many things but they affected everybody. So I’m happy with fourth. I feel bad that Ben Seitz wrecked his car earlier. That stinks.”

Cicconi’s teammate Tim Ice was content with his finish as well. “It wasn’t too bad a race. Starting back there in eighth made it tough as it looked like it was pretty hard for everybody to pass. I don’t know if anybody had anything for the leader. He was really, really good. Lap traffic was fun. Everybody kind of moved up and we had some pretty good racing. We were a little faster than Louie at a few points but not fast enough to pass him. That’s probably a good thing because maybe he’ll still bring my car to the races next week.”

ISMA moves on to Waterford Speedway Saturday Aug. 18 for a 50-lapper.

Lichty arrived in time for feature, started scratch. Ben Seitz crashed during last warm-up session and did not start. Bob Magner did not return from the previous week’s rain out.