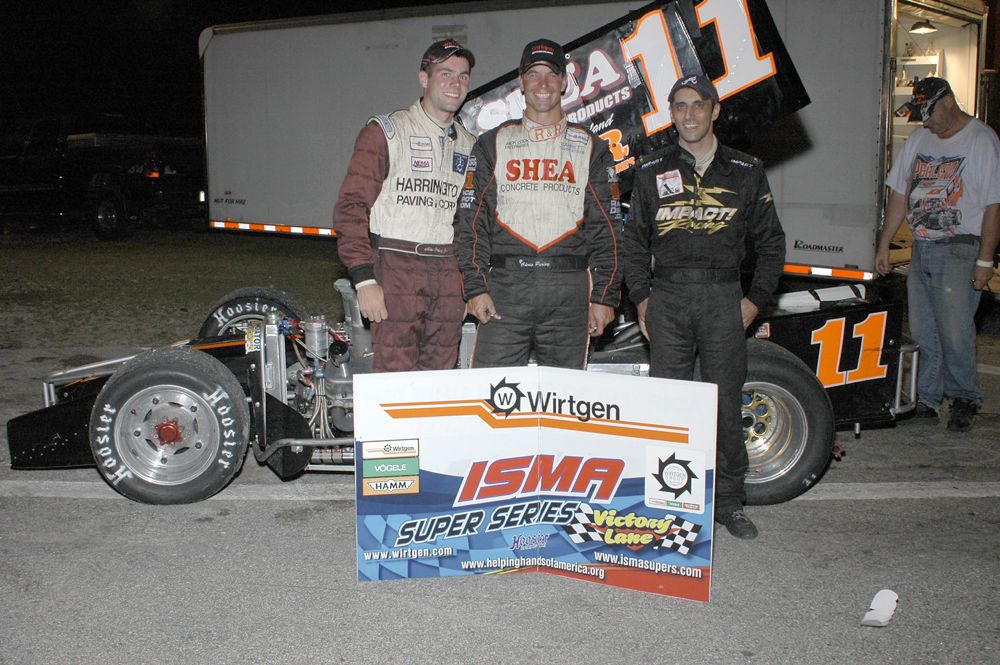 Lee, NH – The Ollie Silva Memorial 75 got off to a real rough start at Lee USA Speedway Friday night but when all was said and done, Chris Perley came away with his eighth win of the season, and a tie for the ISMA All-Time win list. What was purported to be one of the largest crowds in years saw one hometown boy – Perley – take the lead on lap 38 from another hometown boy – Justin Belfiore. Another young hometown boy, Mike Ordway Jr., gained second on lap 42, to chase Perley to the checkers. It was a popular podium finish.

“It’s awesome to bring one home for the hometown crowd. There are so many people who came out. There’s a lot of pressure. You’re afraid you’re going to be an idiot out there. The first lap, the back of the car got drilled. The car lifted up. I was sideways. I thought we were all done. I just got lucky and plugged away. I’m just ecstatic. We’re still on a roll and that new bucket of luck still has some in it, so we’ll keep on rolling on to Oxford. To be tied for the top spot in the ISMA all-time wins is amazing. It’s great to just be among those guys at the top.”

Mikey Ordway pressured Belfiore and then Perley, but after losing brakes on lap 45, settled into a strong second. His running mate of just a week ago, John Blewett III, was on the teenager’s mind all the while. “The car was awesome. It was real loose in practice and I didn’t know how good we were going to be for the feature. We got it fixed up pretty good and I just followed Perley around. We lost the brakes on lap 45 and that made it tough. I wish we could have gotten the win for Johnny Blewett but I’ll take a second to Perley. We’ll keep John in our prayers. And, hopefully we’ll give Perley another run for his money tomorrow night.”

Justin Belfiore, coming back after a crash at Sandusky, had a strong run out front before Perley took over. “It was kind of a weird night. My car was good all day. I just think I ran it a little too hard at the beginning. I was hoping I could keep those guys behind me and that the laps would wear down quicker. But, Chris and Mikey were hooked up. I’ll take the third. Those two have been racing every week and they’re into it a little more right now. We’ll be back. We’ve got a good car now.”

The race started out with four straight yellows before one lap was in. Affected were Mike Keeler, Kelly Miller, Eric Emhoff, Vern Romanoski, Joe Petro and Bob Timmons Jr. Miller and Emhoff were the only cars not to restart at this juncture.

It was Jon Gambuti, driving the Martel 14, out front when the race finally took hold. Belfiore was right there as was Robbie Summers and Dave McKnight. Belfiore moved in to take the lead from the New Jersey driver on lap 4. As things started to settle into green flag racing, Jeff Holbrook, Scott Martel, Jamie Timmons, Mark Sammut and Chris Perley were the men up front behind the 8 and 14.

Yellow flew again on lap 13 when the 31 spun again and Joe Petro headed into the pits. Billy Buyck in the Bushley 38, also pitted here.

Belfiore charged out front on the restart chased by Dave McKnight who had come by Gambuti and Summers but Justin quickly put some distance between his car and the Canadian.

Things just couldn’t seem to stay green however as poor Belfiore found the field bunched behind him on restarts. One came on lap 18 when Bob Timmons finally parked it and both Dave McKnight and Mike Lichty were pitside. Lichty came back out but McKnight was done. Just as Belfiore pulled away from Gambuti again, yellow flew on lap 21 for Vern Romanoski and Jamie Timmons. Vern got back on track only to find himself sliding into the grass with R.D. Timmons joining him on lap 22.

Finally, the yellow fever was cured and Justin took off out front as Gambuti, Scotty Martel, Summers, Perley, and Ordway began their assault of the front spot. But, as often has been the story this summer, it was Perley making the most moves the fastest. He described it this way. “I realized there was nothing on the bottom and I move way to the outside. Then I basically did kind of a Dale Earnhardt rim riding effect. That was the only place I could get some bite. It seemed to work and it allowed me to save the tires for the end.”

By lap 25, Perley was third. On lap 28 he had moved by Gambuti for second as Martel fought his own car in fourth and Mikey Ordway Jr moved into fifth.

Justin was able to hold on until lap 38 when Perley took over the front spot, leaving Belfiore to fend off Mikey Ordway. Gambuti, Martel, Mark Sammut, and Summers were swapping spots just behind.

Lap 42 saw Ordway by Belfiore and the two black and orange machines kept together for a while until Ordway lost brakes and began to fade back from the high flying Rowley driver. Ordway was reported to be smoking with about 20 to go and when the yellow flew on lap 61, he was asked to stop out front for a check while the 55 of Joey Scanlon was attended to. With many caution laps already run, it was decided to do a quick refueling while the tech men checked over the 10 which was deemed okay.

On the restart, Ordway tried to stick with Perley but couldn’t. In the meantime Belfiore closed in on Ordway for several laps. Unfortunately for Gambuti he was penalized for jumping on the lap 61 restart, and although running fourth on the track, he was no longer holding that position. Mark Sammut moved into fourth with Gambuti and Summers the next in line behind Perley and Ordway when the checkered fell on lap 75. Gambuti was scored at the tail of the lead lap giving Summers fifth.

Sammut, who had never run well at the New Hampshire oval commented, “I’m glad to get a fourth coming out of here. We usually run terrible here. We were a little looser than we needed to be. Too bad we didn’t tighten it just a bit more. We might have been better. The car was actually coming back around toward the end. We’re happy with fourth. I could see Justin and Mikey Ordway so we were close. We just need a bit more.”

Summers, off a streak of bad luck, was happy with fifth. “We had a decent car and we got out in one piece. The past couple weeks have been real tough on the whole team and they worked real hard to get the car back together. We were just a little too tight tonight. So, we’ll go on to Oxford and hope we do a little better.”