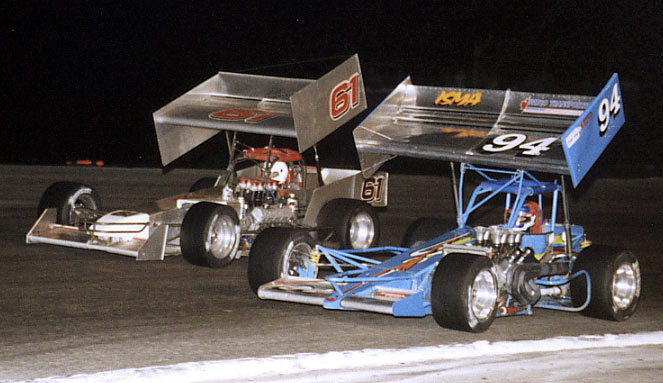 Oxford, ME – Mike Ordway picked up his second win of the ISMA season Saturday night at Oxford Plains Speedway. It was also his second straight in this 100 lap event at the Maine 3/8’s mile oval. . Ordway started tenth on the field and played a waiting game as the race played out in front of him. He moved into second just past the midway mark and set his sites on then leader Dave McKnight. It took a while for the Fremont, NH driver to reel in the high-flying leader, but on lap 72, as the pair approached some lap traffic, Ordway made his move by. For the next 25-plus laps the 61 stayed out front although McKnight contested his loss of the lead on more than one occasion. The Booth-Ordway team collected a hefty $6,000 for the win.

Said Ordway, a little out of breath on this hot night, “The car was good all night long. I can’t thank these guys on my crew enough for giving me one heck of a race car. I couldn’t have done it without them. Lap traffic was running pretty fast too tonight, so you had to take your time and give them a little room, just hoping that they didn’t get in trouble. I was getting just as loose as everybody else toward the end there. I was just hanging on at the end. ”

Second place was still not first McKnight, who had won six races in 2001, “What can I say. Second again. I guess the checkered flag is eluding us. It was a good run. Congratulations to Mike. He did a good job. I think both cars were equal there. The last caution,. my right rear never came back. I wasn’t able to drive away. Hats off to everybody on the Patco team. They did a great job. Brad did a great job tonight too. He ran out front for a long time. Hey, we’ll go to the Big O and see what happens. ”

The hard charger may have been Furlong, who was fresh off a win at Lee at another track he had never run on. “I needed a caution at the end. I couldn’t see Mike. he was gone. I was catching Dave. If we had had a caution I would have liked to race with Dave (McKnight). Our car is good in long runs. The car stayed really, really good. At the end I’d stay in the middle of the track and I’d get a bite down the straightaways. A 100 lap race – I think Mike definitely had the better car. It still would have been nice to have a caution at the end. We were pretty good in lap traffic. I started back in 17th and for a while, I had two or three cars racing in front of me and I’d have to wait for them to do something before you could make your move. I kind of had to sit and wait and let things pan out. When they got in single file, I could pick them off one by one. Tonight lap traffic kind of helped me out. Usually lap traffic kind of hurts me. Tonight it was pretty good for me.

Ken Bell, off the outside pole, took up the early lead but things slowed almost immediately on lap 4 for a Ryan Wimert exit of turn 2. Wimert pulled himself back onto the track and the racing resumed.

Bell’s lead expired on lap 6 when the Brad Lichty 84 challenged and took over the point. Lichty made quick work of the field and began to lap cars by lap 18. Holding onto a strong second was Jim Shirey in the Steve Miller 16 with McKnight, Bell, Ordway, Lou Cicconi, Joe Gosek, Scotty Martel, Chris Perley and Russ Wood all readying their game plans.

Yellow flew on lap 23 when Jamie’s Timmon’s 27 spun off turn three coming to rest with a fire erupting from this car. Fast work from the safety crew put Timmon’s out of harm’s way.

Lichty had a 2-lap car cushion on the restart but Shirey lost his second place spot to Lichty’s teammate McKnight soon after the green dropped. Another yellow on lap 28 for Randy Wimert’s 60 put McKnight on Lichty’s bumper for the restart, but Lichty was up to the fending off the advances of the 2001 champ.

The lead changed hands finally after intense pursuit by McKnight of Lichty when the Canadian dual found McKnight taking over on lap 38. Joining the mix now was Ordway who had made his way by Shirey finally in the same lap. McKnight was a rocket ship out front as Lichty held off the charging Ordway for a couple laps before Mike maneuvered by. McKnight still had a huge advantage, but a lot of lap cars were still out there looking for position also.

On lap 50, Ordway closed on McKnight as they were about to lap current point leader Russ Wood. Lichty, Shirey, Joe Gosek, Scott Martel, Joe Payne, and Chris Perley were still in the hunt in the long hot battle.

The race now became the McKnight-Ordway show as the two left the others behind and developed a race of their own. In and out of traffic they went as Ordway looked to close up the gap on the 94. By lap 70 he was closing fast and one lap later Mike moved to the high side of McKnight on in turns three and four and was by as the pair came up on the first turn.

McKnight didn’t let Ordway get away though after the two swapped positions. Lichty still ran a strong third while Jim Shirey now had the Friday night winner, Greg Furlong, right behind. Furlong, who had started 17th, in his first appearance at Oxford, had methodically worked up to fourth just ahead of Chris Perley.

The leaders lost their large advantage on lap 83 when the final yellow flew for Howie Lane’s 97 which limped off the track with obvious steering problems. Scott Martel ducked into the pits here and changed a tire, a move which later cost him a lap in the order. In ISMA certain tires cannot be changed, without penalty, unless completely flat or damaged and it was later determined Martel’s tire situation was not a penalty-free one.

In the meantime, fifteen laps remained to victory for either Ordway or McKnight. Lichty, Shirey, Furlong and soon Martel, on a new shoe, were the top runners with Joey Payne and Joe Gosek right there also. Ordway, however, saw victory in sight and began to pull away out front. With ten to go, Furlong was the man on the move as he went from fifth to fourth and then to third with only two to go.

A banzai move off turn four by Brad Lichty on the last turn of the last lap, sent the top five runner off into the grass and backward to the finish line as the checkered waved for Ordway. This left the top five rearranged some as the sheets were checked. The finish order was Ordway, McKnight, Furlong Shirey, Martel and Perley with Payne and Gosek getting by the sliding Lichty at the finish. Martel was then penalized one lap for the tire change, moving him to tenth, ahead of Russ Wood, two laps down. The official finish now read Ordway, McKnight, Furlong, Shirey and Perley with Payne, Lichty, Gosek, Bell and Martel the top ten.

Jim Shirey ran the race of his season and he was very pleased with a fourth. Said the Oberlin, OH driver of a Mexico, NY based car, “I had a good time. I knew I had a top five car but I didn’t have a car to win. It was loose from the start. I drove it accordingly. I had a good time out there racing with everybody, especially Brad. I had a tough time with some of the lap traffic, but everybody has that. It feels good to get another top five. I’m happy for Steve and Sharon (Miller). I’m trying to bring them where they need to be.” And, Perley, who wasn’t sure where he should have been commented, “Let’s see. I was the third fifth place car tonight. I don’t know what happened to Scotty, but whatever it was, I’m sorry. He’s a good friend of mine. I figured we were in trouble about lap 15. We started to get loose and we really needed a push, but didn’t have it. You just kind of sit out there and plug away waiting to see what happens. I’m psyched to come out with a fifth, because I felt we had a tenth place car But whatever happens, happens. A second last night and a fifth tonight…it’s still not a bad weekend. We finished.

Notes: Haverhill, MA’s Rick Wentworth, who was transported for a possible concussion from a heat event crash, was back in the pits by race time….The next ISMA event is at Oswego Speedway’s Super Nationals on August 31.