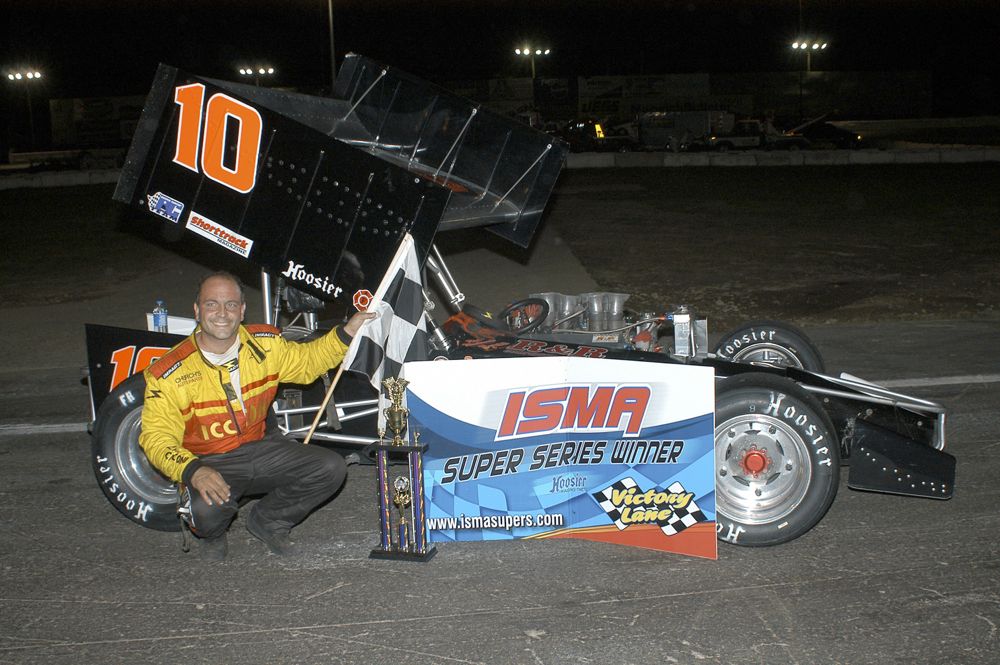 Waterford, CT – It had been almost a year since Lou Cicconi was behind the wheel of an ISMA supermodified but he certainly didn’t lose anything in that time. Saturday at Waterford Speedbowl he slipped behind the wheel of the Wentworth 10 and came home with a win at that Connecticut oval in what was probably one of the most exciting supermodified races in recent history. After a very rough time getting the race started, 48 green flag laps were clicked off in the 10 minute range. In that short time five different drivers took the lead with “Liquid Lou” the final one. Cicconi’s last supermodified win came at the Star Classic in 2006. The Waterford win was his second there in the five ISMA appearances. The large swarm around Cicconi in victory lane included car owners, Rick and Paula Wentworth, the crew and many well-wishers.

“I really have to thank Rick and Paula Wentworth for giving me this ride and everyone who helped out,” the Aston, PA driver said. “This is really great. I won the first race we came to here. I think this is the fourth. Two out five. I could tell when I was following the 61 and then the 84 that they weren’t going to take off. Dave just got lucky in the slow traffic and stretched it. I knew with that last restart – green white checkered, that the fight would be between me and Mike. If I’d have given Mike a quarter inch he would have given it a try. I knew I had to be real fast and smooth. I didn’t want to leave him any breathing room.”

Mike Lichty, who lost his lead to Cicconi on lap 27, pursued him with all he had until the end to settle for second.

“It was a good day, better than yesterday at Lee. The whole PATCO team doesn’t have much luck at Lee. Second is a great finish for me tonight. It’s great to see Louie back in a super. The first time out in a year and he wins! I have to thank Reg Welford a ton for helping put the 74 back together in the week after we crashed the 84 at Mansfield. It was a long week.

“Lou had the car tonight. We weren’t far behind him. Lap traffic kind of worked to his advantage and it was just one of those nights – not for us. We jumped out in the lead there and just got beat in lap traffic. We stayed probably four or five car lengths behind him for the rest of the race. Lap traffic was pretty tough tonight.”

Chris Perley was right on the lead duo’s tail for much of their battle to finish third. Said the current ISMA point leader of his podium finish.

“I’ll take a third. Louie did a good job. I thought Mike was going to get it. I don’t know when he’s going to win one of these things. We had a great battle it was pretty wild. It made for a great race for the fans once it got started. Unfortunately it took a long time to start. I was actually gun shy of the right rear tonight and I made the crew tighten it up too much. It was my fault really. The car just stayed tight. Hey, we kept going. We didn’t break down and we got a third place.”

A huge crowd was on hand for the exciting night of racing and they got their money’s worth after a horrible start turned to a fantastic finish. A red flew before one lap was complete when the 27 of Jamie Timmons, the 5 of Vern Romanoski and the 78 of Mark Sammut came together in turn four. Timmons received the worst of it while Romanoski lost a rear end and Sammut was able to restart.

The complete restart found the 97 of Rob Summers heading pitside with a broken driveshaft. Then a three-wide maneuver in turn one on the next green sent Mike Keeler’s 56 on the hook and out of the race. Keeler had just picked up a podium finish in the preceding NEMA event.

Finally, on the next try the start stuck and it was a fast and furious 48 laps ahead before it slowed again. If you blinked you missed a pass or maybe two. Bobby Haynes Jr., who had picked up his first heat win earlier, took off to lead the initial circuit but Friday night’s Lee USA winner Dave Shullick Jr. stormed up from 10th to take over the point by lap 2.

By lap 15, the mix of lap cars found Ordway Jr. catching up to the back end of the 61 with Lichty, Cicconi, Perley, the top five. But, four laps later Shullick suddenly pulled the 61 off into the infield and Ordway was the new leader. Shullick said later, “The power steering went but the car was working great until then.”

Ordway Jr. took the Holbrook 41 out a couple car lengths but Lichty, Cicconi, Perley and Santos didn’t give him much chance to relax. On lap 26, Lichty, still looking for his ISMA career first, passed by the 41 to lead lap 27.

There was just no letup in the action as the dizzying pace continued. On lap 31 another new leader hit the board when Cicconi got around Ordway Jr. who slid back a couple spots in the spot swap.

With less than 20 to go, Cicconi, who had just gotten in the 10 that day, took charge but did not lose Lichty, Perley and Ordway Jr. by any means. Also still racing hard were Haynes, Dave Trytek, Jeff Holbrook, Bellinger, Mark Sammut and Abold.

Intense traffic – and not slow traffic – met the lead pack at every turn and on every straight, giving Cicconi a little leeway out front until, with two laps to go, the yellow, then red fell. Jeff Holbrook and his teammate Dave Trytek, who had been running just off the top five, sat in between one and two. Holbrook was a bit shaken and the ambulance carried him back into the pits. The sore and bruised Holbrook replayed the incident later from his hauler. “The car was going good on the outside. I was passing cars there. I came up on Dave and he twitched and got a little loose. We touched wheels and I went in the wall and into the air. And, that was it.”

Now, after the mind-boggling pace of the last 48 laps, the field bunched for the final two-lap shoot out. Cicconi had two lap cars in between him and Lichty and Perley. Santos had just grabbed a spot and sat fourth ahead of Ordway Jr.

The final green dropped and Cicconi was off like a streak. Lichty and Perley broke by the lap cars but Cicconi now had the advantage. Ordway Jr. stole back his fourth from Santos in the final circuit as the checkered dropped less than a half a minute later due to the high 12-second race laps the lead cars were running.

“My only concern on that last wreck was that the car was running hot and I was afraid of overheating under caution,” said Cicconi of those last two laps.

Ordway Jr., who sat in the infield with a breakdown at Lee the previous night, was back in form Saturday. “The car was real good at the beginning and we led a few laps after we got by DJ. And, then it just got real tight. We had some trouble with lap traffic. A couple guys got by me after a while and I was running fourth. Santos got by me right before the red with two to go. I got a real good restart and got back by him and ended up fourth. I have to thank Jeff and the guys on the crew.”

Santos, who had sat out the NEMA midget ride after his sister Erica lost a motor in her car and took her brother’s car into the feature, was happy with fifth, although he would have preferred the fourth. “We just got real tight at the end. The car was good. I had a lot of fun this weekend. These guys did an awesome job. They worked their butts off yesterday to even be at the racetrack. So I can’t complain about two top five finishes in my first time in the Soule car. We’re happy and I’m looking forward to the next one.”

Russ Wood, Jeff Abold, Mark Sammut, Brandon Bellinger and Scott Martel finished up the top ten with Bellinger and Martel a lap down.