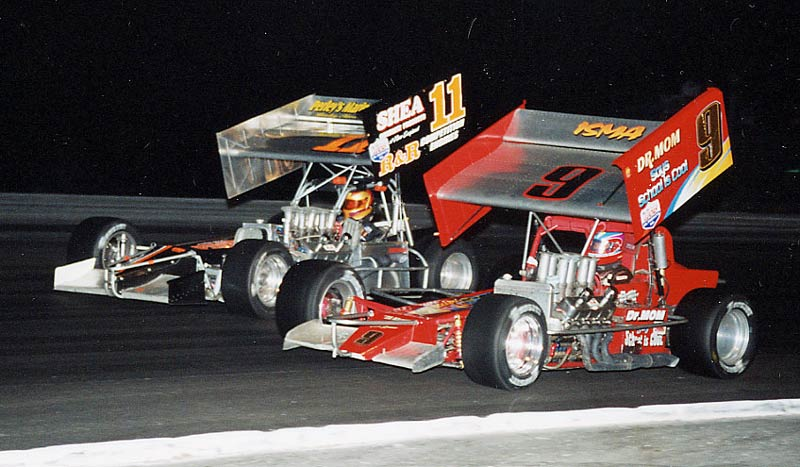 Oxford, ME – It was almost unfathomable that the young man standing in victory lane Saturday night at Oxford Plains Speedway had just won his first-ever ISMA-Lucas Oil Super Series feature. But, won he had, taking the Howie Lane 97 into the lead on lap 10, and for 90 more laps, holding off some seasoned supermodified veterans for the victory worth $10,000. The quiet, unassuming 17-year old Bobby Santos III had accomplished what some have tried years to do in the potent division. While it certainly was not his first win in a short, but illustrious career that has found him claiming victory in Star Speedway 350 supers, NEMA midgets and notching a second place in the competitive SunocoModifieds at Thompson Speedway, it may the most memorable to date. Santos, from Franklin, Mass., also brought car owner Howie Lane and his Reader Electric-sponsored team their first ISMA-Lucas Oil victory. It was a definitely one for the record books!

Said the new winner above the din of applause from the large crowd on hand, “This is amazing. I can’t believe it. I don’t even know what start this if for me in this division, but I know it’s not too many. This is a great crew I drive for. I can’t thank them enough. I’d also like to thank all the guys I race with. They treat me great and they’re great to me in the pits, coming over to congratulate me. I saw Dave McKnight beside me there. I knew I had a little more so I used it when I saw him and I used it at the end. I had to give it what I had. Racing with someone like Dave McKnight was racing with someone I could trust.”

Santos was challenged near race end with some side-by-side racing by 2001 ISMA champion Dave McKnight, but to no avail. Said McKnight after the race, “We tried. We still have motor problems. We’re not right yet. But, hey, we’re in one piece and second here tonight, second last year, second the year before. Iâ€™ve got the three seconds. It was a good job by the Patco-Lucas Oil Racing team. They worked hard. I think we’re getting back on track and it’s a good time to do that. We’ll see what happens in a couple of weeks at the Big O.”

Chris Perley, who had taken over the ISMA point lead the night before at Lee Speedway, added a few to his point lead by finishing a close third. The “Rowley Rocket” commented on what had just transpired. “We had a pretty good car today. It tightened up a little bit, but we had another good run. We didn’t know what to expect from the track. It’s fast and everything. Everybody was afraid

of the rear tires, but from what I saw a lot of us ended up being tight at the end. We just went overboard. But, Bobby did a great job. It was fun watching him and McKnight battle. I could just run with them, but I couldn’t really gain. It was a great battle to watch. It tested Bobby and I think he passed the test tonight. I think it’s awesome for him. To be in that seat – hat’s off to the Lane crew. And, McKnight needed a good run too and it was good to watch him too. It was good, clean fun. We just came up a little short. I’d like to thank my crew and sponsors – Shea Concrete, Perley’s Marina, R&R Engines, NEMRS, Barrett Transportation, Hardy Transportation and Jack Cook Enterprises for all their help.”

Only 22 cars were able to make the call to the green in the Oxford Plains 100 ISMA event, but what a show they put on. After testing the waters on the newly paved oval in warm-ups and the qualifiers, the time had come to see what the surface would provide. If the first three laps were any indication, the crowd was in for a great one. Jamie Timmons, Lou Cicconi and Mark Sammut led each of the first three with Sammut taking over until Santos moved the 97 by on lap nine and away he went

The first of the only three yellows that stopped the progress of Santos toward his first-ever career win came on lap 15 when Randy Wimert spun off turn four. Wimert was not able to continue.

Mark Sammut tried to reclaim the point on the restart, but Santos was determined to keep it. Soon, Lou Cicconi was back on his tail, then his own teammate Randy Ritskes began pursuit. As the race flew by, it was apparent that Santos had something special this night. He began to pull away, slowly but surely, until he had built up almost a half track lead over Ritskes, Sammut, Cicconi and Jamie Letcher. Moving up through the field were McKnight, Perley, Nokie Fornoro, Russ Wood and Scott Martel.

Santos, whose sister Erika had just finished third in the NEMA companion feature, began to put cars away one at a time as the race approached the halfway mark. Still sorting out behind were Ritskes, Sammut, McKnight, Perley, Fornoro, Wood, Martel and defending race champion Mike Ordway. By lap 47, defending race champion Ordway had moved up behind Sammut and McKnight, as Ritskes ran second a good distance behind. A great deal of action ensued while Santos held his own out front as McKnight, Ordway, Ritskes, Perley, Sammut, Fornoro, Wood and Martel ran wing to wing each lap. Ordway suddenly pitted out of third on lap 61 when he suffered motor failure, leaving the spot to Ritskes.

With 25 to go, Santos still had control as he moved smoothly by some lap cars. McKnight, Ritskes and Perley were still battling amongst themselves as Fornoro, Sammut, Wood, Furlong, Martel, Abold and Bentley Warren did likewise a short distance back

Things looked like they might change when on lap 78 the field was bunched for a spin by Joe Petro. Jen Chesbro exited the race at this juncture with an overheating 33. The crowd watched intensely as McKnight was now right on Santos’ tail on the green, but Bob pulled away slightly. Several laps later, Perley finally got by Ritskes and he now chased McKnight. Yellow flew one more time to give Dave, Chris and others a fighting chance. It came at the expense of Scott Martel who broke a hub while running near the top ten.

Once more McKnight mounted some unbelievable pressure that might have intimidated even the most experience driver, but Santos did not yield. With five to go, he began to pull away by a couple car lengths, showing that he had a little more than his pursuers, McKnight and Perley. At the checkered, Santos had done the almost impossible. In just a few short attempts, he had beaten some of the best in the business and the crowd left knowing that they had not seen the last of this rising star of racing. McKnight, Perley, Ritskes and Abold completed the top five. Ritskes, who Santos thanked in victory lane for much advice as his teammate, commented, “We got fourth. We destroyed our tire in the heat

race. The crew did an awesome job for the feature because I didn’t think I’d have a tire left after 20 laps. We ran a good, easy pace, but the car tightened up at the end. Thatâ€™s all. That’s the stuff that happens. That’s why there is only one winner. The kid did a great job.”

Howie Lane, longtime competitor and car owner, whose two cars had done him proud Saturday night, just smiled as he watched the ceremonies. “These guys work so hard. I can’t even tell you. This was a frame Monday morning and we worked all week on it. We had a problem last night and we worked all day on it. And, this kid is just so smooth and it’s such a nice family, I can’t be any happier than I am right now.”

Pat Abold, the fifth place finisher who had battled his way to the spot, said, “The car was just too neutral at the beginning. I knew this place was going to be tough on tires and I didn’t want to burn them off. But, I didn’t want to go back that far either. I couldn’t drive the car any harder without taking

the tires off. It started to come alive at the end, but we actually got tight too. It was a good run.”

The next outing for the ISMA-Lucas Oil Super Series is the Oswego Speedway Super Nationals on August 30 as part of Classic Weekend. Santos, by virtue of his win, also earned a guaranteed spot in this prestigious 50 lapper, which pays $6,000 to the winner.