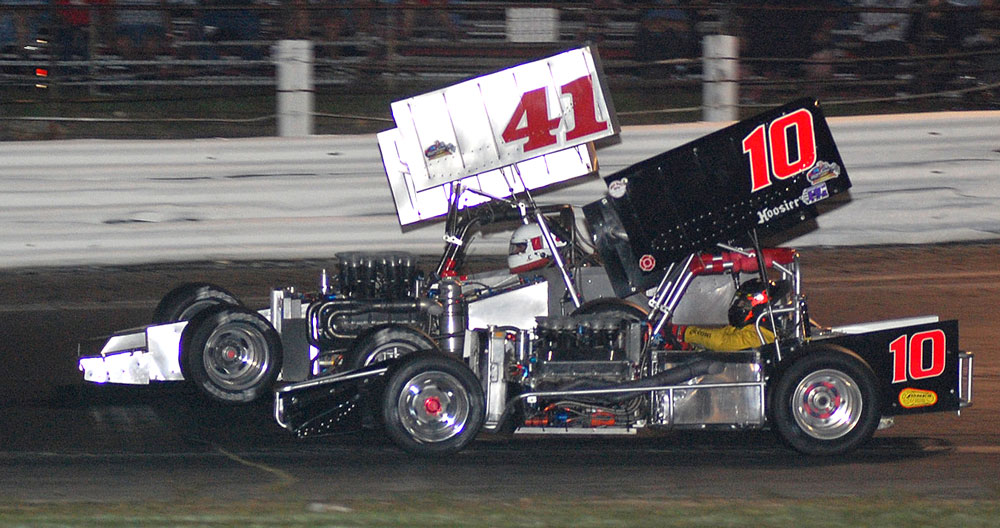 Waterford, CT – When the ISMA Waterford 50 took the track around 11:30 Saturday night, the competitors had to think about beating each other – and the clock. A midnight curfew indicated that any yellow past midnight would checker the race. It did just that. With the battle out front between Mike Ordway Jr. and Lou Cicconi raging for most of the race, it could still have a different outcome had the last 3 laps be run. Cicconi had gotten by Ordway Jr., running the Holbrook 41, on lap 45. A yellow just into lap 48 brought the race to an end with Cicconi taking his third ISMA event at the 3/8th’s mile Connecticutoval since the inaugural event in 2005.

Said the animated Aston, PA driver in victory lane, “Seriously I don’t think I’ve ever run 50 laps here as fast as I could. I know little Ordway did the same. I don’t know what the track looked like behind us but we had to be checking out. It was a really fast pace. I thought the only shot I had was through traffic. We got lucky in terms of the way the traffic fell. Both of us hit it just right. One time we passed the 55 or 56 and his wing blew apart. It came right into my face. It was tough. I was tight. If Mike didn’t blister the right front I wouldn’t have passed him. My man Mikey drove a heck of a race. Awesome job.”

Ordway Jr., who had led every lap of the race except the last three, was happy with his run. “It was pretty good out there. I was a little tight from the beginning. We planned on it loosening up, but it just got tighter and tighter. I think the mod rubber did that. We blistered the right front. It started overheating at halfway. I was blowing water out. I said I’m waiting, I’m not going in. Then I lost the brakes about lap 30. It was out of control. Then Louie showed a wheel a couple times and we held him off. He gave me enough room. He ran me clean. So we had fun.”

Another of the young supermodified lions, Danny Lane, ran a strong race to hold off a bunch of guns behind him to finish third. “I wish we had those three laps at the end. I think I had something for at least the 41 and maybe the 10 if I could have gotten a run. I’m psyched. I’m happy to take a podium finish. I figured those guys behind me were right there. I didn’t think we were setting a pace that could really leave those guys behind. But, I thought my car was good enough to stay in front of them. We did a lot of work to the car this week. We straightened some things out that were wrong with it. I have to thank my aunt and uncle for letting me drive this car. It’s an unbelievable privilege. Plus all out sponsors, Essex Seafood, Dr. Mom Says School is Cool, Northern Glass, Reader Electric, and Pro System Brakes.”

Racing against time was probably the key element in the Wings and Wheels 50 as Eddie Witkum Jr. and Ordway Jr. took off at the green. Ordway Jr. put the 41 out front immediately and almost immediately, Lou Cicconi brought the Wentworth 10 into second. And, away they went.

Yellow flew on lap 7 for a wall banger by Jamie Timmons who was flatbedded off the track.

Ordway and Cicconi left the pack behind on the green as Witkum Danny Lane, Eric Lewis, Dave McKnight, Chris Perley, Rob Summers and previous Speedbowl winner, Dave Shullick Jr. diced for position behind. Shullick, whose 61 may have suffered some internal problems at Delaware according to car owner Clyde Booth, exited the track at the lap 10 mark.

By lap 15 Ordway and Cicconi hit the back of the pack and heavy traffic. Ordway indicated traffic was not a big problem for the lead duo. “We kind of caught the traffic at the right time. We were both able to get by. I was just wicked tight.”

A series of miscues occurred just after midway. On lap 27 yellow was called for the Witkum 38 who had slid off turn four into the grass but then kept going which made the flag unnecessary. No penalties were assessed and Witkum resumed his third place spot.

Just into lap 28, Witkum, unfortunately, came together with Jeff Abold going into turn three. Witkum’s possible podium finish was done. Abold returned at the rear. On the restart, Brandon Bellinger flew the yellow once more and he too was done.

The clock was really ticking now as Ordway and Cicconi resumed their battled out front. Danny Lane now held third as Dave McKnight, Robbie Summers, Ordway Sr., Lewis, Ben Seitz and Chris Perley were all hot on his tail.

Ordway Sr., driving the Vic Miler 71, slowed suddenly on lap 31 but was able to make it into the infield without a race stop. Robbie Summers followed Ordway’s move one lap later and in he went.

With one eye on the clock and one on the counter, only ten laps remained as midnight approached. As long as the race stayed green, it could continue past the bewitching hour. Ordway Jr., with a blistered tire, could no longer hold off Cicconi, however. As the duo prepared to sandwich Dave Sanborn, Ordway Jr. lost his race-long lead to “Liquid” Lou.

On lap 48, Justin Belfiore’s 98 sat up in between 1 and 2. The yellow flew and then the checkered flew with 47 the last complete lap scored. Trailing the top three of Cicconi, Ordway Jr. and Lane, were Dave McKnight and Russ Wood. Wood had actually been making a pass for fourth at the time, but to no avail.

Said Wood of his race, “We started 17th. We stunk all day. The guys worked on car and it was really pretty good in the feature. I was right there. I had just taken fourth by passing Dave McKnight when they threw the yellow and then the checkered. The leaders were there. I think we had a shot at them. My car was good most of this weekend. We’ve got to be happy with it.”

McKnight, who wasn’t sure which top five he got until the score sheet was passed, indicated, “It was a good night for us. We struggle at this racetrack. My hats off to Brad, Reg, Mickey, everybody involved today with Patco. To come home and finally finish a race here means a big confidence builder for us. We’re going to build on this and go to the next race. I think we’re getting back on track. We had a good solid run. We were in the hunt there. It could have went either way if we had finished the race. Anyway, great run. Really happy with the finish. Hats off to Louie, He did a good job to win tonight. We’ll see what happens when we get to Oswego for the wing show.”

Notes… Lee winner Mark Sammut blew an engine in the first heat and the crew had it changed for the feature for Sammut to keep a hold on his second place point standing.