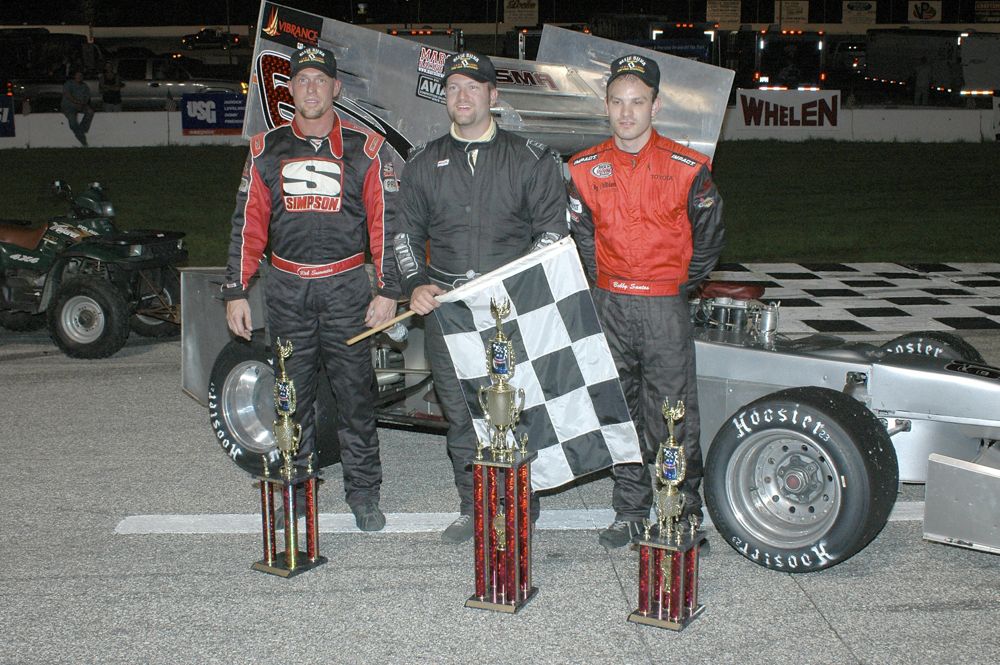 Lee, NH – Ohio’s Dave Shullick Jr. had to fight off a lot of adversaries to win his third-career ISMA event at the Lee USA Speedway Friday night. Not only did he have twenty-two competitive drivers to contend with, he also had to beat the rain and a midnight curfew. And, just at the stroke of midnight, Shullick brought the Booth 61 over the line for the win in the Ollie Silva Memorial 75, ending a race that almost didn’t happen. It was only his fifth feature start in the Booth car and the first he finished. The second-generation driver replayed the race in victory lane.

“Just before we came back out after the rain, Clyde said something about at half way it would be a complete show. So I was trying to be a little more aggressive than I would have been. I wanted to try and keep it out front. I thought I could keep up the pace I was running the whole race. The car was just dynamite. I could just drive it through one and two with no problem at all. And, I probably could have picked the pace up but I never heard a challenger, so I didn’t. I have to thank Clyde and Sue Booth. They are the ones who have to go back each week and fix it. They built a helluva race car.”

The second place finisher also fought off some adversity of his own. Bobby Santos III had just dropped into the seat of the new Soule Racing 32 for the first time Friday and after a few problems in practice, looked like he’d raced the car for a year. He started the race in 21st and was up to second on lap 50 when he passed by Rob Summers on the top side.

“I have to thank all the guys on the crew. We had some problems today but they worked through it. They worked hard and no one gave up. I wish we had a couple yellows. The car worked well in a short run. Everyone else was riding at the top and I found grip on the bottom. It was working perfect for me”

An intense battle set up for second for a while throughout much of the first half of the race as everyone was running full bore dodging the raindrops. Robbie Summers, who has fought off some mechanical woes himself tested Shullick on many an occasion in the first part but just before halfway, Shullick appeared to be untouchable. Summers, driving the old Lane 97 had been fast all day and only Shullick had been faster. But then the Soule 32 put him in third where he stayed. He credited his crew for their hard work getting the car ready during the short time from Mansfield to Lee.

“I have to thank the whole Essex Seafood Howie Lane crew. We brought Old Betsy out tonight and this thing was just awesome. They deserve this. We just got loose there toward the end. It was our first race with it this year. We just have to get the bugs out and it will be good. Thanks to the fans for sticking with it. It was a rough night and we have to do it all over again tomorrow and it looks like it’s going to be good – no rain.”

After several delays for rain the green dropped on the field of 23 supers. Dave Shullick Jr. started outside the front row because of his low handicap from the past few dnfs and he used the spot to shoot out to a quick lead. Rain was looming all around and everyone was aware of that fact. Summers quickly jumped into second with Justin Belfiore grabbing off third from Bob Haynes Jr.

Dave McKnight flew the yellow on lap 7 with a trip off the track in the front straight. He restarted and so did the sprinkles.

The race resumed with Shullick staving off the advances of Summers and the top two tried to shake off Belfiore as they entered traffic. Moving up as fast as he could was Chris Perley who passed by Jeff Holbrook and Jamie Timmons to move up behind Belfiore.

With the rain still falling intermittently but not enough to stop the race, Shullick and Summers were moving rapidly to get to that half way mark. Lap cars began to dot the road between first and second and the rest as Belfiore and Perley became separated from the top two. Timmons, Scott Martel, Santos, and Russ Wood were in a tight line close behind. Moving into the top ten by lap 27 was Jeff Abold in this fourth winged appearance in the Rayvals 05 this year.

A yellow finally slowed the pace when the 29 of Russ Wood and the 79 of Jon McKennedy tangled in the backstretch. Mike Ordway Jr. pitted out of the action at the same time, as did Vern Romanoski.

Back in action it was evident Shullick was lengthening his lead over Summers who was fighting off the 88 of Belfiore as Perley, Santos, Martel, Timmons and Abold challenged.

Shullick was well out front when the 38th lap came and went and he just kept moving away from the 97. Belfiore was alone in third while Perley was fighting to get by the 94 of McKnight who was a lap down.

McKnight brought out a yellow on lap 48 which also affected Timmons with both restarting. One lap later McKnight’s teammate, Mike Lichty, flew the flag with a spin. McKnight ended his race here exiting the track while Lichty was pushed back into the fray.

On that last restart, Santos made a dive at Summers to get second while Perley, Belfiore, Martel and Abold tried to stay with the front trio. Abold was the man on the move as he passed by Martel a lap later.

With 15 to go Shullick had a half-track advantage and only lap cars might have threatened his win as he raced by them, putting three markers in between the 61 and second place runner Santos.

With five to go, it was Shoe II, Santos, Summers, Perley and Abold with Shullick approaching the back end of the top six, putting one after another down. At the line Shullick got his checkered for the Booth team while Santos and Summers gained podium finishes. Abold was still racing as he came off the fourth turn and made a last corner run at Perley for fourth. Almost side-by-side at the checkered, Perley held the spot by .013 seconds.

Said Perley afterwards, “I was praying for rain when that lap 34 caution came out, because I was all done. All we did was maintain for the rest of it. We just got loose. We missed something somewhere. I knew someone was back there at the end. I didn’t know who it was. I just kept on changing my line to keep him back because I knew I was slowing down. I was just trying to hold on to what I had. Then Abold got a run at me at the end and he would have had that pass easy. I think I got him at the line by about four inches. It was just enough. I knew it was really tight and I was hoping our transponders where mounted on the same spot on the cars because otherwise he would have gotten me with a longer car.”

Abold, whose dad Pat has a couple Lee wins under his belt, commented, “We had a pretty good run. At Stafford we had a good run and at Sandusky we had some hard luck. It’s nice to come out and grab another top five again. I was catching Chris fast. We just needed another foot. That would be good. But, we’ll take a top five. We’re happy with that. And, we’ll head to Waterford. It will be a busy day with the super and the midget. It should be a fun one.”

Belfiore, Mark Sammut, Scott Martel, Mike Ordway Sr. and Dave Trytek completed the top ten, all one lap down to the Shullick 61.