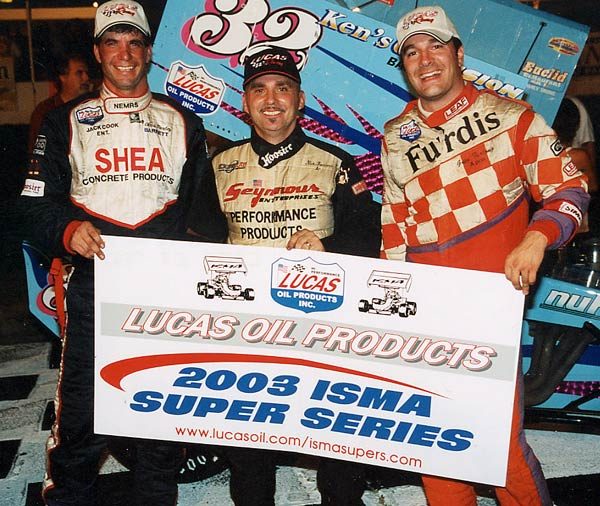 Lee, NH – Nokie Fornoro climbed aboard the Soule Racing 32 for the first time ever Saturday night at Lee USA Speedway, filling in for regular driver Ken Bell, and some may say miraculously came home the race winner. But, it’s not the first time the amazing driver known for his successes in the midget ranks, has had a good run in an unfamiliar supermodified car. This time he took the top prize in a caution-filled 75 lapper after passing race leader Mike Ordway with three laps remaining. The win was worth $3,800 for the Soule Racing team. The Reeders, PA veteran driver was ecstatic in victory lane.

“This is great,” said Fornoro, “I think everyone is pretty happy. I’m very elated. I’d like to thank Butch for putting a bug in Danny’s ear to give me a chance to night. Kenny was sick and couldn’t make it this weekend. I hope he’s feeling better. I just can’t thank those guys enough for giving me the opportunity. I wish I could run with ISMA all the time because I love it, the people are great. I never sat in this car until tonight. I think Mike burned his right rear and so did Pat coming up and Louie. They were really too neutral to start. I couldn’t get the push out all night with all the changes we made. That was the best thing to do I guess.”

Chris Perley, chasing Russ Wood for the ISMA title, started the feature from 20th spot after a less than auspicious heat run. Said Perley, who finished second to Fornoro, “It was a long race. We were great on the long runs. On short runs we were terrible. I think we had an over abundance of cautions tonight. That kept on hurting us. But I’m psyched we got up as high as we got. The crew did an awesome job. We floundered all day obviously starting twentieth. We had a lot of family here today. It was nice to put on a good show for them. Nokie did a great job and I see Furlong got third. I hated to see Ordway used up his tires. I hate to take a position from a friend, but I’ll take a position from a friend. I’d just like to thank everyone, my crew, my sponsors, everyone.”

Greg Furlong, the defending champion of the Lee event, chased Perley up toward the front in the waning laps and finished one spot behind him. “This was a long, long race,” said Greg after the yellow-filled race: “It was kind of sad that it took that long’ too many cautions, dumb mistakes by guys, but I guess that happens. We were really tight all feature long. Here, the car usually loosens up a ton and it did at the end, but I still had a little bit of throttle push. I had a good car at the end. I don’t know

if I had a car to win, but I think we may have had something for Perley but he got out front and he had a better car early.”

The race started out on a yellow and went downhill from there in that department. Before one lap had been completed, Jim Shirey’s 16 was out for the night with mechanical ills, Brad Lichty and Bobby Santos had pitted and Jen Chesbro was being pushed away after a spin.

Green fell once more and Cicconi, absent from the past several ISMA shows because of a bad crash at Cayuga, hurried his old 75 out in front. Moving quickly up to second was a former Lee winner, Pat Abold.

Yellow flew again on lap 15 for a flat on the Wentworth 10 which was repaired in the pits but on his attempt to return, a panhard bar broke and Rick was done.

It was the Cicconi-Abold show developing as the race got going again. Behind this duo were Jamie Timmons, Jamie Letcher, Mike Ordway, Joe Petro and Nokie Fornoro.

Cicconi was putting tail cars down a lap as he tried to flee the scene. But Abold stuck with Fornoro as Mike Ordway moved into fourth behind Timmons. A quick debris yellow flew on lap 25, again slowing things.

Back underway, Cicconi and Abold were joined by Mike Ordway and the trio now left behind a freight train of Timmons, Fornoro, Dave McKnight, Perley, Scott Martel and Greg Furlong.

On lap 35 Ordway put the 61 under Cicconi and he now took command. But, the race slowed shortly thereafter for a spinning Jamie Timmons, who was able to restart.

Only one lap was completed by leader Ordway before another stop for a tangle between John Payne and Joe Petro, who also restarted at the rear. A couple laps later, red for refueling dropped after a Jamie Timmons-Brad Lichty jingle.

Ordway was able to control the point as Abold and now Fornoro chased. Slowdowns came on lap 40 and again on lap 45 to throw the race out of sync again. Falling backwards at this point was early leader Cicconi who faded into the pits on lap 47. Lou said later that something just happened to the car, and he didn’t know what.

Ordway reached the lap 50 mark well out front as Fornoro moved by Abold for second. Cruising into fourth was Perley who had gradually was making ground on the leaders.

Three yellows came out between laps 53 and 55 and it was here that an impending curfew found yellows now counting. Affected in the three slowdowns were Johnny Payne, Dave McKnight, Brad Lichty, Jamie Timmons, Justin Belfiore and Jeff Horn.

When the green finally fell on lap 59, it was for good this time. Ordway took off, but did not lose Fornoro in the process. Perley, Abold and Furlong were now the top five with Scott Martel, Bentley Warren and Russ Wood trailing. Abold’s good run ran sour within a lap as he began to use up his rubber.

With five to go, Ordway looked to be a multi-time winner of this August Lee race, but on lap 71, Fornoro was tacked right to Ordway’s back end as traffic approached. Nokie made a low move under Ordway on the backstraight to take over the lead on lap 72. On lap 73, Perley got under the 61 and in the last circuit, Furlong made it by Ordway for third. At the checkered, the unbelievable had happened as the popular Fornoro, in a totally new ride to him, crossed first for the victory. Perley, Furlong, Ordway and Martel were the top five.

Said Ordway after loosing what looked like a sure thing, “The tires went away or something. The yellows hurt, the heat cycles and stuff. But, then, everybody is in the same boat. You can’t win them all.”

Scott Martel, not a regular on the ISMA trail this season, enjoyed a good run before a hometown-type crowd. “It was a long race. I’m happy for Danny and Nokie. I’d like to thank all my sponsors. It’s good to run well in New England. I hope we can improve on this finish tomorrow at Oxford.”