CHRIS PERLEY IS TWO FOR TWO AFTER WATERFORD ISMA 50 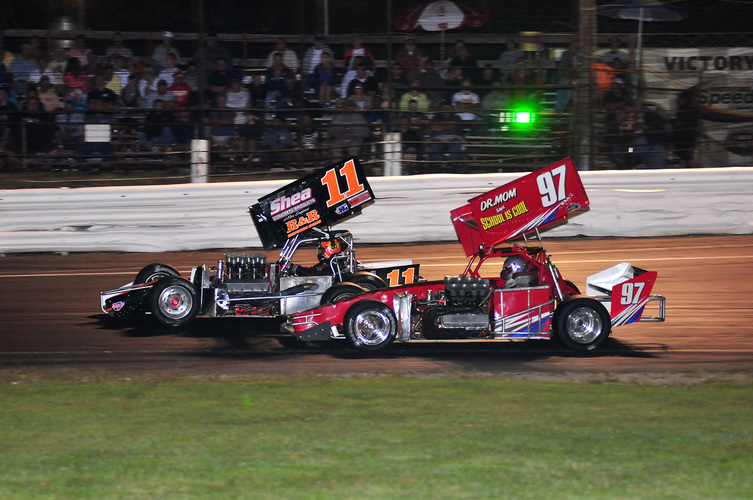 Waterford, CT – “I’d rather be lucky than good,” said Chris Perley after his Waterford Speedbowl win on Saturday night. It was a race he probably should not have won.  But, when you consider Perley’s achievements over the years, the words luck and good are used together not as an either/or.  The Waterford ISMA 50 went straight green for 36 laps over a time of 8+ minutes before a stop occurred for a bad wreck that bunched the field. The restart set up an intense torrid battle out front between Mike Lichty and Lou Cicconi that was a heart stopper. Chris Perley was settling in for a third place finish when on lap 44 the 84 and 10 came together off four, sending one into the first turn wall and one into the infield, both heavily damaged. After the cleanup and the speculation began as to what happened to the front-runners, but the race was not over. For the remaining seven laps, Perley pulled away from now second place runner Joey Scanlon, to claim his second feature win in as many nights. He became only the second repeat winner this ISMA season.

Perley jumped from his Vic Miller 11 in front of the large, vocal cheering crowd, and commented, “When Louie and Lichty were battling I really wasn’t in there. I was trying to creep up on them and getting there was taking me too long. I would have been proud to finish third to either one of those guys and second to either one. They were putting on a great race. I really don’t know what happened up there.”

He continued, “I was more worried about when I almost spun myself out over there in four early in the race.  I don’t know how I saved that one. Then when Vern hit, that was scary. I thought I was going to be in that one. I was on the outside of the 88 when Vern hit the wall and bounced back towards me. I lifted when he hit and then got on it hard because he was coming at me. I just skipped him with my right rear. That was lucky. We had a couple close calls, but we finished. The crew just puts a car together that keeps on going. It’s awesome all you guys came out here tonight. Looks like we have a packed house. Hope we put on a good show for you. We couldn’t do it without you and all the sponsors obviously. I love Waterford and love coming here.”

Finishing second in his best run to date in the Budnick 88, Joey Scanlon said of his first podium finish, “We had a really good car. The crew did a fantastic job putting a great car underneath me. I could put it anywhere on the bottom. We had a really good run and we needed that. It was really close out there when Vern hit. That was scary.  I’d like to thank all my sponsors – Eddie Shea from Shea Concrete Products, Harrington Paving and to all the fans who support us; the whole crew, car owner Bruce Budnick. We had one hell of a good time tonight!”

Dave Shullick Jr. admittedly was a little surprised to be third. “It was a good run. We were just tight. We had a good car that was wicked tight. It screwed the right front tire up from pushing so bad. We kind of salvaged a third tonight, but it was probably a fifth place car. We’ll just take what we got and move on.”

Ohioan Rich Reid was back driving the Ohio-based Lehnert 92 and he took advantage of his pole-starting spot to grab the lead. From the moment the green flag dropped, there was no eye blinking as the lightning-fast pace on the “Bowl” did not stop until fourteen laps from the end.

Charging very quickly up from eighth spot was previous Waterford victor Mike Lichty evidentially ready to pick up his second straight. He was by Reid out back on lap six to take the lead. Reid, Dan Lane, Scanlon, Shullick and Seitz tried to follow Lichty but Mike was on a mission and fled.

On lap 10 the aforementioned incident for Chris Perley occurred. The 11, deep in the pack, came off four almost did a 360, corrected, drove through some grass and was back on the pack before anyone thought of dropping the yellow. This move alone probably helped his cause later in the race.

Lichty continued well out in front of Reid and Scanlon, but eyes were on the 10 and 11 who both appeared to be moving well through traffic. By midway, Cicconi had put the Wentworth 10 into second ahead of Scanlon who now had Perley at his back door. Reid, Shullick, Seitz, Wood and Lane were next in the lineup.

At lap 35, Lichty was slowed a bit by traffic but still had several lap cars between his 84 and “Liquid Lou”. As Cicconi was moving by one of those lap cars, Vern Romanoski, suddenly was into the second turn wall hard, bouncing off that wall and out into the middle of the track. A quick red dropped as cars, like Perley and Scanlon, just missed being victims in the incident. Vern’s car was heavily damaged and flatbedded off the track.

On the restart, Cicconi now had a clear shot at the leader. Game on! The 10 pulled outside of the 84 as the green fell and the duo brushed here in four, continuing on. The leaders went at it all around the track, sometimes side by side, sometimes nose to tail, but always amazingly close considering the speeds. Perley, while the two battled, was able to close up the gap a little and some speculated that the master of the game would have the battle in front of him play into his hands. On lap 44, it did just that, but not exactly the way Chris had planned.

From his catbird’s seat he described the scene in front of him. “I got up to third and Cicconi and Lichty were having a heck of a fight up there. Cicconi got on the outside of him once and they touched a little bit through four. Then Lichty overdrove into one and Cicconi got under him. Then I don’t know what happened in four. I know they touched but I don’t know whether some one turned in or what. They usually race pretty clean. They race hard, but clean. I just don’t know what happened.”

The second red of the night dropped on lap 44 and the cleanup began. Later as the 84 was being lifted into the PATCO trailer, Mike described the incident from his point of view, “It was a racing deal to start. Louie was clearly quicker than me. He was on the outside of me a couple times in one and two there. At times I was loose off, but I was tight in the center. So I was kind of washing up the track. He was on the outside of me and I had a whole bunch of wheel to it and I washed up into him. I got into him. We were racing hard, banging some wheels. When he cleared me down low or thought he cleared me, I probably still had half a car length in there. He started coming up and at that time I realistically should have backed out of there a little because he was quicker and he thought he had the spot clear. It’s unfortunate. I don’t wreck equipment. We definitely had a top three car tonight and now we’re rolling it into the trailer on a dually. I feel bad for Louie.  But, again it’s a racing deal. We’ll go on to Oswego and see what happens there.”

Unfortunately, the obviously unhappy Cicconi had taken off right after the accident and had left the speedway for his Aston, PA home, before his view could be recorded. Car owner Rick Wentworth was able to give a brief synopsis of what his driver had said before he left.  “He (Lichty) hit me three times  – ran me up in the front stretch once, maybe twice. Then when we got side by side, he actual turned into me and put me in the fence.”

Perley gave his thoughts later in an interview. “We still had seven laps to go. But I didn’t figure I’d end up winning. second at best. The top three is what we always shoot for and I would have been very proud to finish third. Tonight we waited it out and we were the lucky ones. Two wins, two nights. Yes, it’s a good start. We have missed a couple races but I knocked the rust off last night and came back with a win tonight. I’ll take it.”

Photos and videos may allow a better assessment of the unfortunate incident with Lichty and Cicconi, but nothing will change the outcome. What might have been a fourth Waterford ISMA win for Cicconi or a second for Lichty, turned out to be a third for Perley.

At the green for the remaining laps, Perley was now the leader followed by Scanlon, Shullick, several lap cars, then Ben Seitz and Russ Wood, Dan Lane, Summers, Rich Reid, and Bob Bond.

And that’s the way they crossed under the checkers at the finish.

Fourth place finisher Wood was content with a second top five in two days. “The car was pretty good. But, the other guys were a lot better. It was tough racing in traffic tonight. The lap cars were hard to pass for me. Those guys were running hard too. We just did what we could. It’s been a good weekend for us – second and a fifth. We’ll take it.”

Seitz, who has shown marked improvement over the past 4-5 ISMA races, was happy with his progress. “It was a good run. The car is getting better and better each week. We had a tough night last night, but tonight is a different night and we had a good car. Again I’d like to thank my sponsors – S.M. Lorusso, Lorusso Heavy Equipment, Cape Cod Aggregates; my crew, my wife, my parents, Bucky, who is not here this weekend, my brother, and my car owner – everybody put a lot of work into this weekend. Thanks also to R&R motors – the motor is an excellent piece and it’s just a matter of getting it on the pavement. I’d also like to thank Rollie Lindblad who built the car. I’m really happy the way this race came out.”