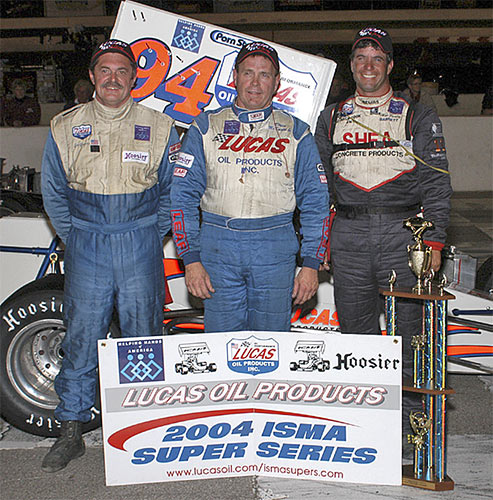 Mansfield, OH – Dave McKnight was a pretty dominant driver in 2001 when he won the ISMA title. Things slid backwards for the Lichty-owned number 94 team after that. While running well, McKnight encountered breakages, crashes or just pure bad luck. The team “remained focused” as Dave says. Their upward turn would come and come it did this past weekend at Mansfield Motorsports Speedway. McKnight won the 40-lap ISMA event on Friday night and came right back to take the 100 lap main on Saturday. A “minor” blown head gasket during afternoon warm-ups did not deter the team’s quest for the second victory. McKnight started twelfth in the field, and worked his way up to second on lap 55 to sit behind race leader Chris Perley and a lap car or two. Caution fell on lap 56 and McKnight found himself the race leader as Perley pulled the Vic Miller 11 pit side with a broken spark plug wire. McKnight restarted the race as the leader. Perley made an awesome charge back up to get within several car lengths of McKnight, but time and tires ran out for the Rocket. McKnight was ecstatic with his second win of the weekend.

“What a night – what a weekend for the Lucas Oil-Patco supermodified 94,” said McKnight. “Hats off to the team. They did a really good job. Those guys worked really hard. We got here today. We did the usual maintenance on the car and just before practice we started up and we found a blown head gasket. The guys got together, stayed focused and put the engine back together. Here we are in victory lane. All I did was steer – those guys gave me an excellent car all night long. “

Dave replayed his game plan for the race. “We decided to be patient and be up there about lap 65. I didn’t plan on having the lead, but we’ll take it. We just put it on cruise. If anybody had shown me a wheel, we had a little bit left for them. I think I had a bit for Chris at the end. It was unfortunate to see him go out like that. But, a win’s a win and I’m sure he would have taken it too. I could hear him coming. My motor was running bad at the end. I was just hanging on and if he’d had enough, I couldn’t have stopped him from taking it.”

Perley, who had taken the race lead from Joe Grunda on lap 27, was running a rail that has been seen more often than not this season. He had set the car on cruise and had a commanding lead when he had to pull in for repairs. His run back to the front was nothing short of spectacular. Awesome was the word most used by fans congratulating him on his second place run. And, he was not unappreciative of his second place finish.

Said Perley after the run: We’re happy. Yes, we lost the race, but we got a second out of a possible really bad finish. We burnt a spark plug wire there around lap 52, dropped down to seven cylinders and pitted when the yellow fell. Luckily it was just the spark plug wire and luckily it was lap 52. If it was on lap 98, I would have been nowhere. We were able to pick our way back up. We had the perfect car tonight – we really did. It kind of took a toll on the tires to come up twice. We were catching Dave at the end, but we were using it at the same time. When I caught up to him at the end, the car was pretty beat up. I had enough to get there though and that was pretty good.”

Probably the biggest smile on the podium was on the face of veteran racing attorney Joe Grunda. Coming off a heat win, he led the race until lap 26 when Perley got by. He stayed in second or third the rest of the way. Joe, whose number 1 sports a for sale sign, commented in victory lane, “It was a real good run. I’m happy. I wanted to get out front tonight to be able to control the pace. I wanted to run hard enough to make the other guys in the back burn off their tires. It’s easier when you’re leading and pacing; it’s a lot easier on the car and the tire. I wanted to go fast enough to make everybody worry but slow enough to save my tires and it pretty well worked. It’s been very difficult to be in Georgia and have the car up here and not be able to run it a lot. I haven’t got to dial it in. Over the winter I found a bind in the chassis and straightened that out. I haven’t run it that much but it gets faster and faster when I do because it’s responding.”

A couple heat incidents found some driver changes for the feature with Kyle Carpenter jumping aboard the Cicconi-driven Lane 97 when the 9 was badly damaged in heat one. Sprint driver Todd Buchanon took over the seat of the ailing Stout 49 after Dave Shullick Jr. departed. When the field finally was assembled to take the green, Jennifer Chesbro, and Jack Smith were on the front row and it was Chesbro who took the initial lead.

Joe Grunda got by the 33 on lap 4, but Chesbro, who had had a strong run sour on Friday night due to a flat tire, was determined. She kept right up with Grunda even after a lap 9 yellow bunched the field when Ryan Klingelhofer spun the May 77.

It was Grunda-Chesbro out front when a scary incident came on lap 13. Scott Martel’s 14 lost a wheel nut coming into turn four of the Mansfield half-mile. Martel hit the wall sending up a shower of sparks, with his errant tire sent high in the air. It landed on the track a distance away in turn one and actually rolled itself into the pit area chased down by a push jeep.

As Grunda took off in the lead on the restart, Timmy Jedrzejek jumped by Chesbro for second and one lap later Perley put the 33 in fourth where she would remain for many laps. Perley and Timmy J diced back and forth for second with Perley taking the runner-up position on lap 21. Chesbro maintained the fourth spot ahead of Nokie Fornoro, Pat Abold, Dave McKnight, John Payne and Russ Wood as most were saving tires and waiting to move.

Perley, after several side-by-side runs at Grunda, made the point his on lap 27 and he began to speed away, putting lap cars in between the 11 and Grunda, Jedrzejek and Chesbro as Fornoro, McKnight, Abold and Wood raced behind.

By the midway mark no one watching could guess Perley was in trouble as his car moved flawlessly through traffic. The next yellow would prove his demise at the front and also end Jen Chesbro’s great run for the second straight night. Jen described her bone-jarring hit into the first turn wall. “I came off four and saw some smoke from a car down the track. I moved down to avoid it and someone else moved down at the same time, so I had to move farther down. It was only a split second of time and I brushed the pit wall I had gotten so low. Something broke and I shot straight into the outer wall. It all happened very fast.” The other cars involved were the 2 of Sean Sauer and the 88 of John Payne spinning to avoid and clipping the outer wall also. Chesbro’s 33 was flatbedded. Payne was hooked and Sauer went pit side only to return there two laps later. As the mayhem was sorted out, Perley’s 11 entered his pit stall with the crew frantically working to repair the car. While the lengthy cleanup ensued, refueling was also allowed. Perley re-etntered the field at the tail.

Dave McKnight found himself the leader on the restart and he gladly accepted the position. Grunda and Timmy J sat behind him with several lap cars separating Pat Abold, Mike Lichty, Fornoro, Moe Lilje and Wood from the front runners. The race remained green for a long stretch with Abold breaking free of the lap cars to run closely behind Jedrzejek in fourth. As the positions up front remained stable, the fans watched Perley driving his way back toward the front. By lap 75 he was back up to sixth behind Mike Lichty, who unfortunately had been caught jumping on the last restart and would be penalized to the rear on the next yellow. Perley was actually running fifth on the score sheets.

In the last twenty laps, McKnight put the pedal down and was moving well ahead of Grunda, Jedrzejek and Abold. Perley was still moving forward much to the delight of the large crowd on hand. On lap 83 he was by Abold and heading for Timmy J.

On lap 87 the final yellow flew for Kyle Carpenter in the 97 and it was here Lichty would take his penalty as he moved to the rear. On the restart McKnight was off like a shot, sensing that things were happening behind him. Perley closed in on Timmy J and zipped by off turn two to take third with ten to go. Two laps later Grunda met the same fate as the Rowley Rocket launched by the veteran driver.

With nine laps remaining it was McKnight and Perley out front with Grunda, Timmy J, Fornoro and Abold just able to watch them. Fornoro made a move of his own to take fourth as Abold followed and Timmy J was relegated to sixth, showing obvious signs of tire wear.

Perley got close to McKnight on lap 97 and on lap 98 the duo approached a lap car, Eric Shirey but Shirey would not provide the obstacle that Perley might have been able to use as the 94 and 11 went by. McKnight crossed under the checkered two laps later with Perley backing off a bit for second. Grunda, Fornoro and Abold took the top five.

Fornoro indicated that he was lucky to get fourth. “Fourth was good. I expected a little more out of myself I’ll say. The track was pretty slick. There was a lot of oil down there and I was kind of the culprit too as we were puking a little bit. I was saving my tires until the end of the race. I had blistered them sliding in the oil but I think it was a good race all in all. I think we might have had something for them if I didn’t have my problem. That’s okay. Fourth is a good finish. I’d like to congratulate Dave for winning both and Chris in his run to second and Joe Grunda – he had a good run for a change.”

And Abold, chasing Perley for the ISMA point title, was content with his second fifth of the weekend. “This track is really good and it makes everybody fast. So there is no car that has a wicked advantage. If you’re off a little, you’re in the top ten. We were off last night and loose. Tonight we were tight. I think we learned a lot tonight again. We’re trying to get the car tighter. I’m not totally disappointed because we did learn something. “

ISMA moves on to Lee USA Speedway in New Hampshire for a Friday, August 20 event.