CHRIS PERLEY BACK BEHIND THE MILLER 11 FOR A WATERFORD WIN 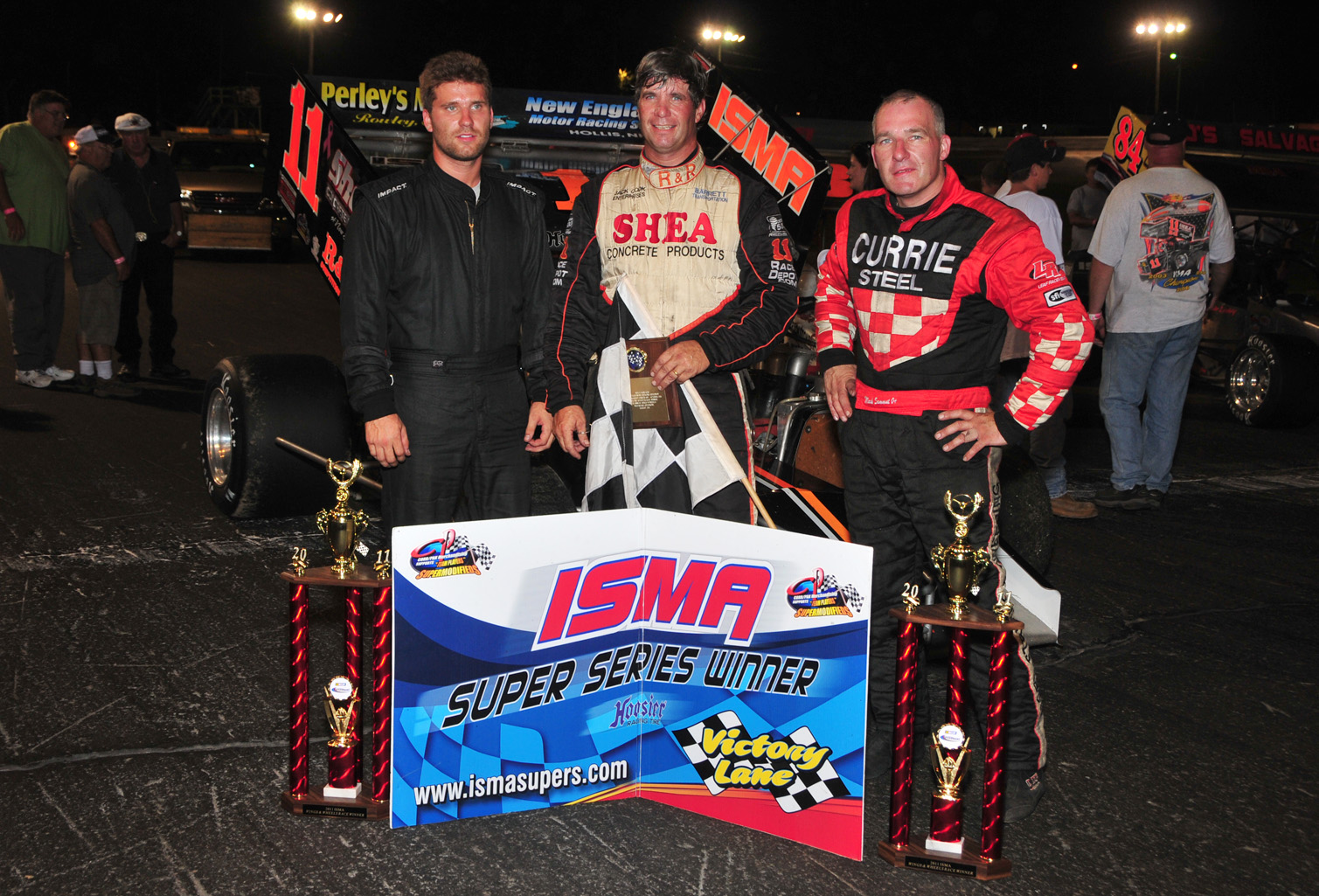 Waterford, CT – Vic Miller’s  #11 had won the previous two ISMA outings without Chris Perley but Saturday night, the Rowley Rocket was back in dominant form. Perley took over the lead of the 50-lapper after a devastating crash involving checked-out race leader Eric Lewis and two lap cars, brought out the red. Perley blew by the 74 of Johnny Benson and the 78 of Mark Sammut in one felled swoop coming off turn four to lead lap 21 and the rest of the way.  A yellow on lap 43 shortened his half-track plus lead, but five or six lap cars sat between Perley and second place runner Sammut, leaving not much chance for a shootout to the finish. The win was Perley’s third of the five races he’s run this season and his fourth at the Waterford Speedbowl since the 2005 ISMA inaugural there. The race was a redeemer of sorts for the now infamous May Waterford event.
“I hope this was a better race than the last time we were here. At least I was able to see it and you, the fans, were too. This is a great place to race at. We always enjoy coming here. The track was great tonight. There were two good grooves for racing. The car was, as usual –right on. These guys always end up giving me a good car and it was a good race out there. I feel bad for Eric Lewis. He was too far in front of me to see what he was doing, but I know he was checked out in the lead. I wanted to see him pick up his first win. But things happen and we’ll always take a win. It’s been a good season. It’s my fifth race and my third win. I’ve also had a second and a dnf where I pulled out before I hurt myself.  Thanks to the fans for coming out tonight. Thanks to Hoosier Tires Corr Pak, Vic Miller, R&R Motors, NEMRS, Ed Shea, Malco, Perley’s Marina, Barrett Transportation, Blink’s Fry Doe, my crew, me, my family – everybody. 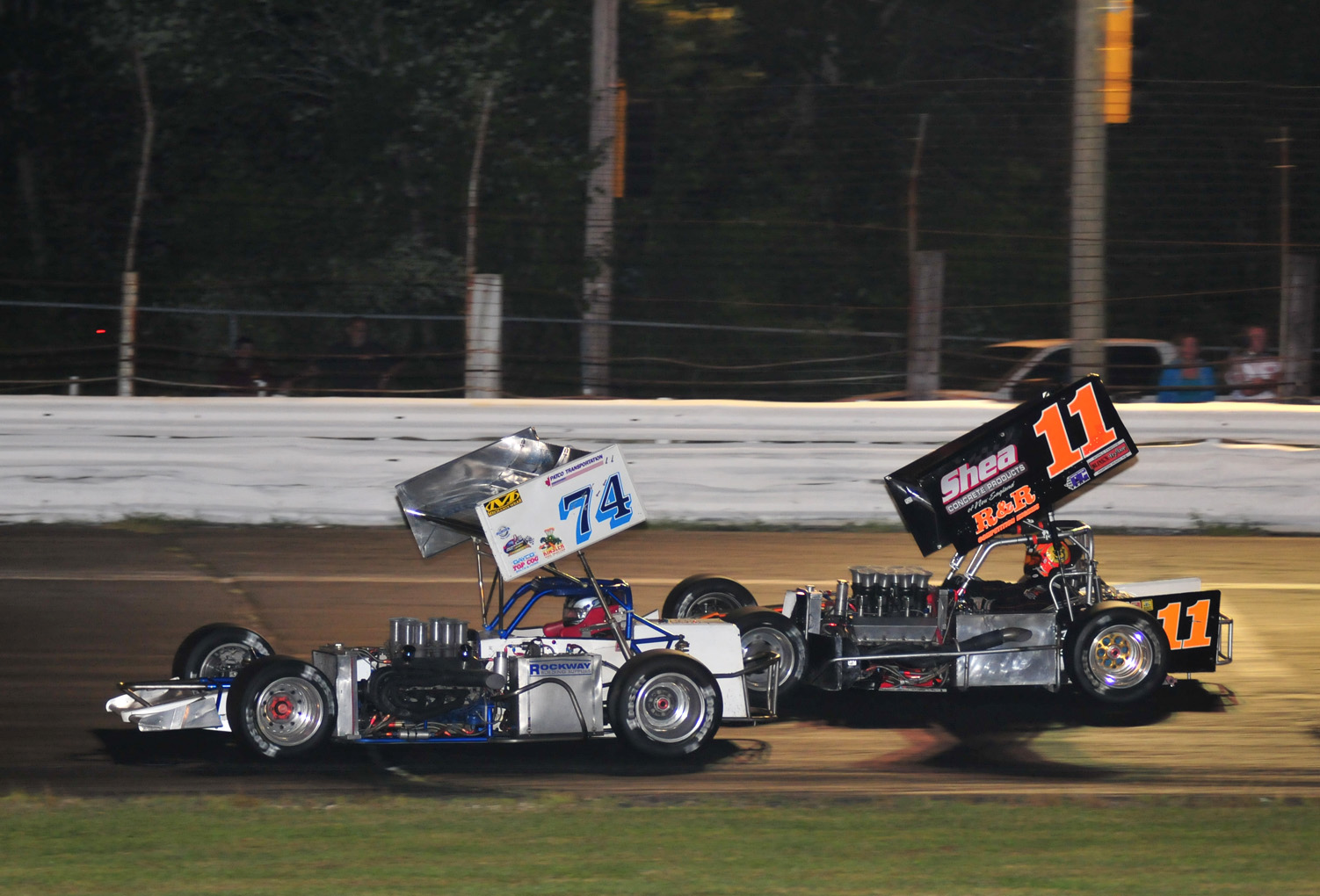 “It was tough. Everybody was there fighting. You can’t blame them. They don’t know that the leader is there. We don’t use the passing flag, which is fine but boy it makes it tough. Everyone was fighting tooth and nail, slipping and sliding. You just hope you can get by without sliding into someone or someone sliding into you. It’s funny. When I slowed down to the traffic, the car got worse. I needed to go fast to make it work better. The slower I go behind them, the harder it was to pass because the car’s loose and pushing. The minute I got up to speed, the car was good again.”

Mike Lichty won the battle for second with less than ten to go after taking away the spot from fellow-Canadian Mark Sammut, who had to get by Brockville’s Craig Rayvals earlier in the race. Lichty indicated that it was a tough run to get there.  “We started the race off way too loose. I’m still learning with this car and now I think I know what we need to do come feature time every race. I had to fight hard to get second from Mark. I was up on the wheel digging every inch. Luckily, everybody else but Chris was that way too. We stayed second because of it. I just have to thank everyone – my dad, the crew, Craig Reed Salvage, PATCO, Stage Door, Rockway Building, Johnny Benson Enterprises, and Ravco Metals.”

Mark Sammut, off a bad Sandusky crash, a major repair job, and two top tens at Delaware, has pleased with a third. “By the end of the race I was just hanging on. We were really good there after the first four or five laps. We got into a groove, got going and we were really good. But then, after the red we lost a little bit. Then after the last yellow, we lost even more. But, it was pretty good most of the night and I’m glad to finish third. I got up high there trying to pass some lap cars and Mike got by me, but that’s the way it goes. Third is good.”

Lewis, who had some of the top times in practice and a heat win already behind him, continued to speed away from the pack and to put away some tail-enders, leaving Benson a distant second, Sammut third and Perley fourth just prior to lap 20 when all hell broke loose for the leader looking for a career-first. On that circuit Lewis’ 28 approached a couple slower cars. He looked for a way to get by and then found there was none. Unfortunately, he and the 92 of Rich Reid crashed heavily into the first turn wall. The red was dropped and the two badly damaged cars were taken away. Neither of the drivers were hurt and neither seemed to be able to pinpoint what happened.

Reid said later shaking his head as the mangled 92 was being packed into the Lehnert hauler, “I have no clue what happened there. I just remember there was a gaggle of cars out there racing hard and this.”

Lewis commented after his 28 was also being pieced into his hauler,  “I don’t really know what happened. I think two cars came together in front of me. They were racing side by side. I think I was past the 92 already and he might have gone over the back of me and that kind of collected it. I knew it was a tough spot and there’s no passing flag so they are running their race and I’m running mine. The car was perfect. Now the car is junk. It pulled the valves right out of the motor. That might have been my first win, but… Maybe ISMA needs to re-look at the passing flag.”

As the green dropped to resume the race, Benson was now the leader with Sammut right behind, but not for long. With less than one lap complete, Perley was by both of them gliding by off turn four for the lead.  He was gone. Benson had the Canadian express bearing down with Sammut, Rayvals and Lichty charging forward. Joey Scanlon, Jeff Locke, Jeff Abold, in the Soule 32, and Russ Wood were among those racing hard right behind.

By lap 28, Perley had caught back up to the tail of the field and began lapping cars one by one. The excitement continued behind as Sammut and Rayvals moved by Benson who had a right rear tire going flat, possibly after picking up something from the previous accident scene. Lichty, Locke, Abold, Seitz and Scanlon were all fighting for position as the race sped by under green.

The slowdown was no threat to Perley because of the lap cars between him and second place Sammut, but still he was cautious. Said Chris of his strategy in traffic, “When passing slower cars I look to try to pass that car where I know I’m good enough to move if he moves. It doesn’t always work, but I try not to just jam myself in a hole, unless maybe when it’s for the leader and you’re fighting for the win. Everything changes as it goes on. I just try to give lap cars enough room that if they get out of shape, I can move with them.”

And, move he did, right to the checkered flag. That late caution gave Mike Lichty a shot at Mark Sammut and he took it despite struggling with his car. Lichty moved by the London, Ontario driver one lap after the restart of lap 43 to take second while Ben Seitz stole fourth from Craig Rayvals in the last two laps, with Rayvals finishing one of his best races in a while in fifth.

Seitz reiterated the redemption theme. “I’m glad we put on a better show for the fans and the track then we did last time out. We all needed it. We had a good run. We were in traffic the whole race. Everybody was fighting the whole time. There was a lot of good racing and everybody was running clean and hard. Once again I need to thank my sponsors Cape Cod Aggregates, Lorusso Heavy Equipment, S.M. Lorusso & Sons, car owner Dick Bien and my crew. Coming back to the east means we finally have a full crew again. It’s nice to be able to relax a little bit because more people mean they take more responsibility for what needs to be done. Sammy, our sponsor, was here for this one and I’m happy we had a good race.”

Craig Rayvals probably had the biggest smile of the top quintet. He’s been struggling for a while, especially after a devastating accident at Lee several years ago, which caused months of recovery and rehab after his injuries. “It’s been two years, two years and a bit actually, since we’ve been on the scales. The car is finally starting to come around. We’ve been working hard on it, Murray and I. We made a lot of changes and spent a lot of late nights last week. We talked to Brian Allegresso; talked to the Abolds; talked to a lot of people and got a lot of feedback. And, now it’s coming around.  A top five feels really good.”

Jeff Abold, driving the Soule 32, filling in for Timmy Jedrzejek who was in Alaska, Jeff Locke, Johnny Benson Jr., Joey Scanlon and Russ Wood rounded out the top ten with Wood the last car in the lead lap.