CHRIS PERLEY IS BACK AND IN VICTORY LANE TO BOOT 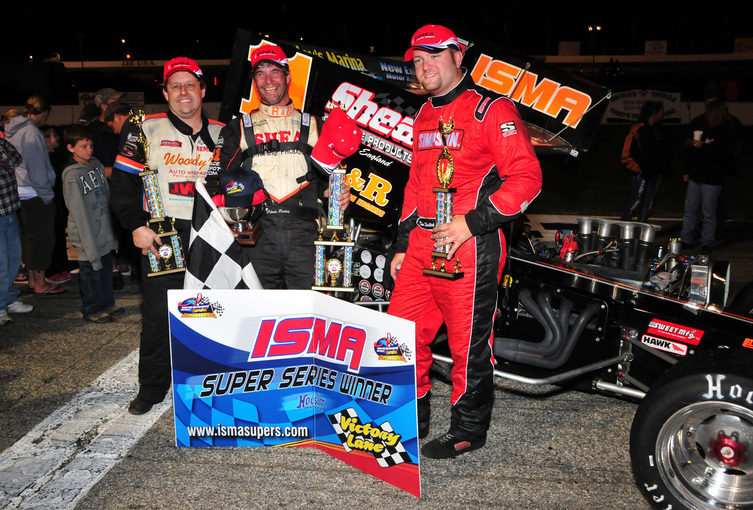 Lee, NH – Four-time ISMA champion Chris Perley had decided to take some time off this year due to a growing business and family. But, at Lee USA Speedway on Friday night in front of a packed house, he showed he hadn’t lost his edge at all. Starting tenth on the field he stealthfully moved through the pack to third on lap 25 of the Ollie Silva Memorial 75. He tracked down second place finisher Dave Shullick Jr. and then headed for second-year ISMA driver Jeff Locke who held the lead after a lap 6 pass of Dan Lane. On lap 32 Chris put the Vic Miller11 by Locke and was not challenged after that. It was his third win at the three-eighth mile oval, since 2004. And his 61st overall in ISMA competition.

Perley described his race. “The car was great. The crew made a bunch of changes like changing the shocks after the heat. I didn’t know if it was the right move. But Vic knows a lot more than I do and that’s why I like to race for him. It really worked out good. I thought I was too loose – even during the race. But it stayed that way. I made sure I didn’t spin the tires. Toward the end the car came right out from under me – that’s what the tires do at Lee so I went ‘ah I blew it. I have ten laps left and I’m not going to make it!’  That’s when I moved up on that caution immediately after that. I scuffed my tires up top and it was good so I said OK let’s stay up there. I kind of hung around up there for the rest of the race. I just prayed that I didn’t screw up, and that we didn’t have any more cautions.

“The crew does a good job. We have good motors. The fans came out. It was a good night – not too hot. The weather was perfect. Unfortunately for Mike he had got in the heat tangle and that kind of bit. I don’t think we’ll have that car done for tomorrow.”

Perley, who had not raced since the July 6th Stafford race commented, “I don’t think I lost a lot the past couple of weeks not racing. I missed not going to Sandusky. It’s tough but I’m staying busy at work and at home. It’s nice to be back though.”

Russ Wood, whose three career ISMA Lee wins goes back to 1988, was able to pick off Dave Shullick Jr. late in the race for second.  He said afterward, “Not a bad night for the Holbrook team – a second and a fifth. We saved our tires the first 30 laps because last year we wore them out and it killed us. It’s just Chris was really hooked up and he took off and Shullick took off and we had to start picking the pace up. Halfway through it started getting really slick. Luckily at the end there Locke kind of slipped up, as did the 61. I was able to get them for second. It’s a decent finish. We’ll move on to tomorrow.

Dave Shullick Jr., who had won the Silva Memorial in 2008, came in a tight third.

“It was a good race. It seemed like we had a good car early. We came from out sixth starting position and got to second pretty quickly. The car was a little tight early which was what we wanted. Then it started going to a push-loose situation and I started to lose the back end. The push finally did go away and then it was wicked loose. I was just hanging on at the end. It was a good run. Chris had a good car at the end. He and everybody else looked a little loose toward the end.”

The Ollie Silva Memorial 75 got off to a shaky start with a yellow flying before a lap was in when a jingle sent cars flying around and Dave Duggan out of the race. Also removed from the fray was Eric Lewis and Jon Gambuti.

Danny Lane took up the lead when the race restarted trailed by Ben Seitz and Jeff Locke. Locke charged up to Lane and took the point away by lap 7.

The 37 of Locke looked strong out front and by lap 19 he was putting a lap car between him and the 61 of Shullick. But moving in on the front duo was Chris Perley who characteristically making smooth progress through the pack.

On lap 25, Locke had just gotten by a lap car Jamie Timmons when Timmons spun bringing out the yellow. Timmons restarted only to have another altercation on the next attempt at the lap. This time the 27 brushed with the 88 of Scanlon, and Timmons exited the race.

Back underway, Locke had three powerhouses, Shullick Jr., Perley, and Wood right on his tail. The Raymond, NH driver was able to hold back the tide, but Shullick wasn’t able to hold back Perley who moved into second on lap 30. Locke was the next victim of the 11 two laps later.

The Rowley Rocket lived up to the name as he shot out front, in and out of traffic and on his way to what looked to be a certain victory. At the lap 50 mark he had two lap cars sandwiched between the 11 and the 37 of Locke. Shoe II and Russ Wood were still trying to get by the 37 as the laps wore on.

Things slowed on lap 53 when Rich Reid spun and collected the recent Delaware winner Robbie Summers. Both restarted at the rear.

Perley was off again on the restart only to have things slow his progress on lap 56 when Justin Belfiore spun in 3 and 4. Belfiore was done, as was Ben Seitz.

That was the last stop for Perley and he easily went across the line well ahead of Dave Shullick Jr., Wood, Locke and Summers, who had worked his way back up to fifth.

Locke was in awe of finishing fourth behind such an illustrious trio. It was a good run, coming in fourth was a dream come true for me coming in back behind Chris Perley, Russ Wood, and Dave Shullick. Just to be behind them is unbelievable. One of these days we might be able to pass them and stay in front of them but all in all I have to thank Rich Witkum, my dad and mom for letting me do this and my wife and kids who are home because my little boy is sick. I wish they were here. All in all we’ll take it. The car was really good at the beginning. It just got looser and looser. Somebody laid some oil down and it just exaggerated the problem. Some people who have a lot more experience than me handled it better than me. We learned a lot today and I’m looking forward to Waterford.”

Summers was a little disappointed with fifth, having thought his car was capable of more until the mishap. “I had a plan and just tried to stick with it. I tried to pace myself for the first 50 laps and not push it. That’s what I did. Unfortunate on lap 52 the 92 just lost it and kind of got me into the wall and made a mess of the car. We have some damage but we’ll try and get it fixed for tomorrow. We had an awesome car again today. I really can’t thank the guys enough. I think we really had a shot at winning the thing but we’ll never know.”

Notes: Mike Ordway Sr. was involved in a damaging accident in heat two which put the Vic Miller 1 out of the action… Lee USA management announced the addition of a Sept. 11 ISMA date to replace the All-Star Classic for this season. The event will have Twin 50s for the big blocks with two separate payouts. An overall Classic winner will be determined by points garnered from the two 50 lappers. A tiebreak of best heat race finish is in place in case of a tie in the points… The 350 supers and three other divisions will join the event.