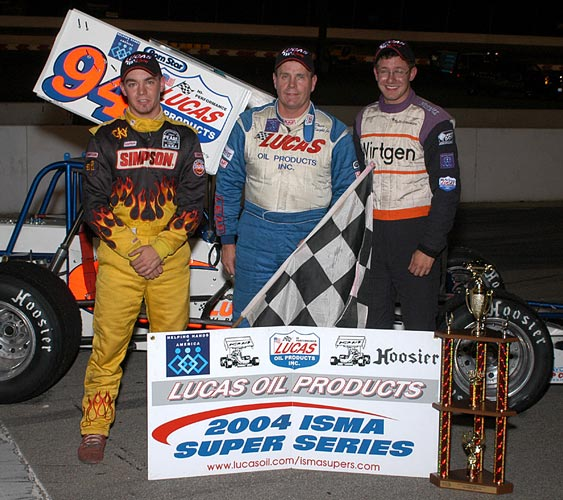 Mansfield, OH – Dave McKnight waited until the last lap of the 40-lap ISMA feature at Mansfield Motorsports Speedway Friday night to steal the win from Vickery, Ohio’s Moe Lilje. But, steal it he did in a “bumping, tire rubbing” move off the fourth turn, as the checkered was about to be unfurled. 2001 ISMA champion McKnight had been winless in ISMA since September of 2001 with his last feature win coming in an MSA event at this very track a year and a half ago. He was hungry. Dave finally was satiated after he moved into second on lap 31 and then closed up the gap on Lilje, driving the Stout 19. Dave and Lilje encountered some slower traffic on the last lap with the pair coming off the fourth turn side by side. McKnight nosed ahead of Lilje to come out in front at the line. He was ecstatic with the long-awaited victory at ISMA’s initial trek to the beautiful half-mile Mansfield oval.

“It’s been a long time coming for the Lucas Oil – Patco Transportation supermodified 94” said the Canadian in victory lane. “It’s been a year and a half now since we won a show. We’ve been fast but the car’s been breaking. We’ve tried to stay focused and the guys put it all together tonight. They did a heck of a job. I didn’t know if I had enough for Moe at the end. We caught up and we came into traffic and that helped out a little bit. We rubbed wheels and we bumped bumpers. It was everything to get by for the win. And, I’m real happy for the team. All it matters is my wheels came across the line first tonight. My hats off to the entire team. They never gave up. We’ve been struggling and I think we’re back.”

Lilje, a relative newcomer to the ISMA crowd, but not to the winged supers of MSA, would have liked the end to come one lap earlier. “This was a good race for about 39 laps. The car started getting tight in the last ten laps. I saw on the scoreboard that Dave had gotten into second. I heard him knocking the last five laps, but I couldn’t hold him off. I’m happy with the run. I’ve run this car before in MSA races and had two top fives and a sixth. This is my first run in ISMA and a second is great.”

Another relative newcomer, Kyle Carpenter, guided the Lane 97 home in third after having led the first 22 laps. Said Carpenter after his podium finish, “I knew we had a real good starting spot but I had hurt my tire in the practices and the heats. I knew I had to be easy on it. It seemed to clean up and got going pretty good. The car got real loose at the end and I was happy to hang onto a third place and get in a couple pictures.”

The first of a two-race series for ISMA began on Friday night at Mansfield with Jennifer Chesbro and Carpenter leading the field down to green. Carpenter grabbed the initial lead with the one and only yellow falling on lap 3 when Rick Wentworth and Justin Belfiore brushed with Wentworth ending up on the hook with a broken radius rod.

On the restart, Carpenter tried to pull away from the 19 of Lilje as the two diced out in front. Jennifer Chesbro held a strong third ahead of Johnny Payne, Joe Grunda and McKnight.

The race progressed at a torrid pace as Lilje dogged Carpenter out front. Coming out of the second turn on lap 22, Lilje made his move and took over the lead as Carpenter prepared for the onslaught from McKnight, who was now in third. Payne, Pat Abold, Russ Wood, Mike Lichty and Chris Perley were still looking to move forward using every inch of the speedway. Jen Chesbro’s good run ended with a flat tire on lap 26.

With ten to go, McKnight moved in on Carpenter and absconded with second, setting his sights on Lilje and a possible win. Abold moved up into fourth with his teammate Russ Wood in fifth as Payne held off Perley who was chased down by Timmy Jedrzejek, as the racing remained intense to the finish in the rapid race.

The white flag dropped for Lilje out front but before the lap was done, McKnight stole the potential first-time victory from the driver of the 19, who settled for second. Carpenter was third but Wood, also on the same lap, took fourth from Abold as Perley took sixth from Payne.

Wood, still getting used to a new car, was satisfied with fourth. “Fourth place isn’t bad. The car was working good. It was getting better and better. It’s still a new car we’re working with. We’re happy with fourth.”

Abold, trying to catch up to Perley in ISMA points, was looking for a yellow. “We needed a caution. We needed the thing to stop a little bit to cool the tires down. We basically went the whole race. It must have been a good race for the fans. It was fun on our part. There were a lot of guys loosing their tires at the end. Tomorrow night’s going to be interesting.”